Did a 26-year-old just take down Thomas Piketty? 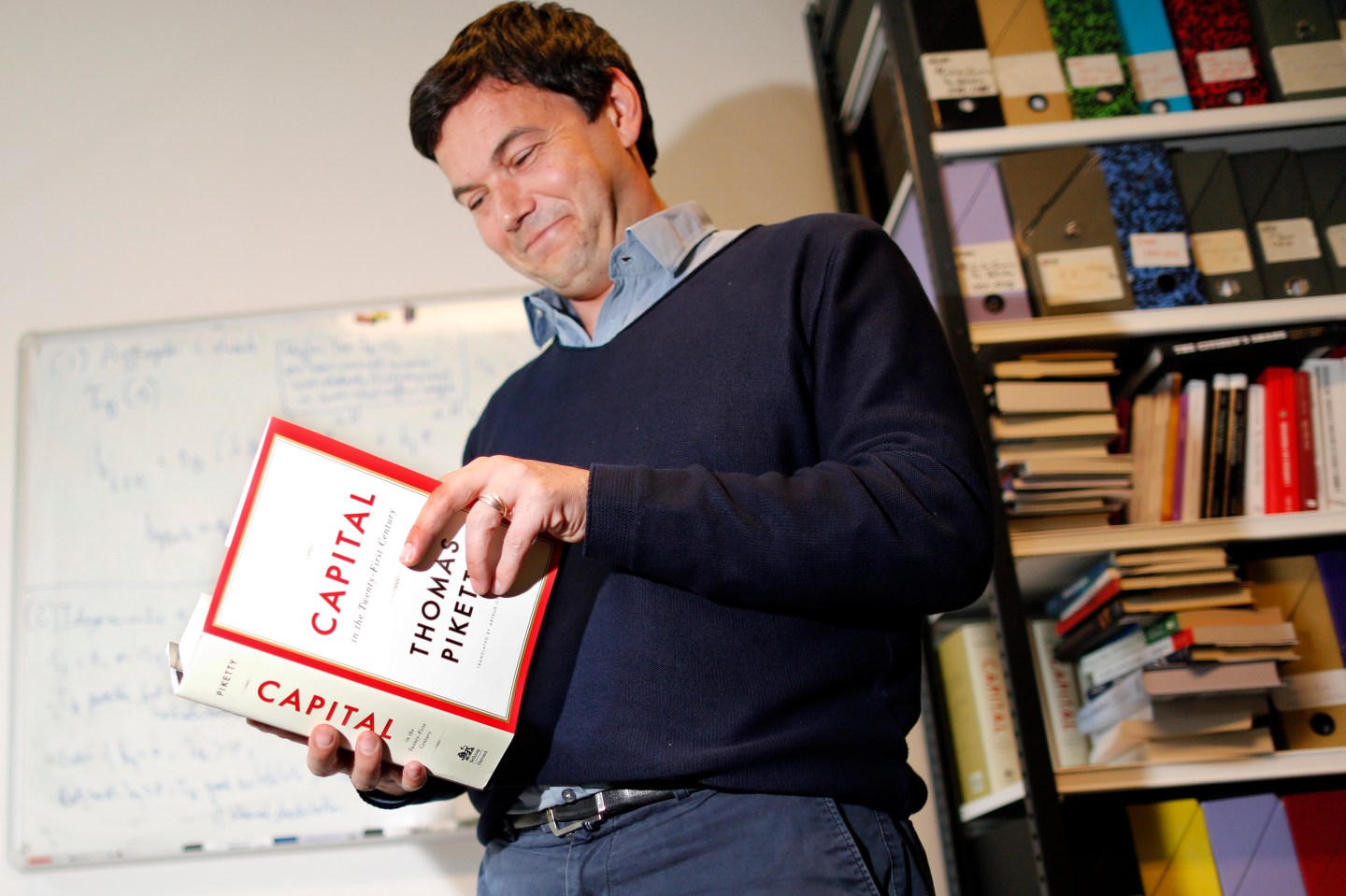 French economist and academic Thomas Piketty, poses in his book-lined office at the French School for Advanced Studies in the Social Sciences (EHESS), in Paris May 12, 2014. The 43-year-old Piketty's book "Capital in the Twenty-First Century" has attracted praise and invective alike on its way to the top of the Amazon.com books best-seller list. Picture taken May 12, 2014. REUTERS/Charles Platiau (FRANCE - Tags: POLITICS SOCIETY BUSINESS EDUCATION) - RTR3OZ0F
Photograph by Charles Platiau — Reuters

It’s not every week that a dense and esoteric book like Thomas Piketty’s Capital in the Twenty First Century captures the public’s imagination.

The surprise bestseller built its success on the general anxiety that income and wealth inequality across the rich world are exploding and that the trend is not good for social cohesion or economic growth. The book has accomplished many things, from codifying research that helps us understand the nature of income inequality over the past hundred years and beyond, to predicting that income and wealth inequality, already at historically high levels, will continue to grow worse. As a solution, Piketty suggests a global tax on capital, or wealth, and the creation of a system to redistribute it to avoid the repercussions of too much inequality.

Piketty’s success has motivated dozens of enterprising economists and journalists to challenge various aspects of the book. The latest challenge comes from a 26-year-old graduate student at M.I.T., Matthew Rognlie,who published a paper last month with the Brookings Institution that argues that Piketty did not take the effects of depreciation into account enough in his analysis of the growing importance of capital. Rognlie also showed that when you do properly take depreciation into account, the decline in the share of income going to workers versus capital owners can be explained completely by the rise in the value of real estate.

The business media has covered Rognlie’s paper widely. It makes for good copy when an economist who hasn’t even gotten his PhD writes a paper that, according to The Economist, “several reputable economists regard . . . as the most serious and substantive critique that Mr Piketty’s work has yet faced.”

At the same time, we should put into perspective the practical implications of Rognlie’s critique. He isn’t the first economist to call into question Piketty’s assertion that the very nature of capitalism will lead wealth inequality to grow much worse than it is now, creating a permanent, dynastic, global aristocracy, or an “endless inegalitarian spiral,” as Piketty himself puts it. Rognlie’s analysis might be better regarded as an addition to a broad body of work suggesting that housing policy in America is holding back growth and exacerbating inequality.

As Rognlie admits in his paper, economists like Edward Glaeser have been arguing that real estate, namely the restrictions local governments put on building more housing in and around economically vibrant areas, has long been slowing economic growth and hurting economic mobility. Building restrictions in vibrant cities and their nearby, exclusive suburbs prevent upwardly mobile people from relocating to places that offer the most economic opportunity.

Where industry is booming, in cities like San Francisco, New York, and Washington, D.C., housing is increasingly unaffordable. Those who were lucky enough to buy real estate in these areas in recent years have seen their wealth explode, but renters and others trying to move there, and up the economic ladder, are struggling.

Meanwhile, recent data from online real estate firm Zillow offers evidence that the real estate market is compounding economic inequality in other ways. Its most recent report showed that the percentage of American homeowners who are underwater, or owe more on their homes than they are worth, stood at 16.9%. Though that rate remained flat from the previous quarter, Zillow found that a homeowner was much more likely to be underwater if their home was in the bottom third of real estate by value. Furthermore, the percentage of homeowners who are underwater increased in almost half of the largest 50 metro areas, the same areas that are struggling economically.

As it stands, homeownership is not a great way to climb up the economic ladder. That’s because working class people can often only afford to buy real estate in neighborhoods where home values are volatile. Investing in such homes can make you financially less stable, rather than the opposite. This is what we’re seeing today, as shown by Zillow’s data, and this dynamic has been exacerbated by the lasting effects of the housing bubble.

This might lead us to believe that we could stem the rising tide of inequality simply by weakening real estate regulations—force localities to allow more building and eliminate policies like the mortgage interest deduction, which drives up the price of housing. Then again, economists have been arguing for decades that such policies are harmful to the economy. And yet the middle class loves them, even if they’re actually broadly harmful.

Piketty’s suggestions that we enact a broad, global tax on wealth might seem far fetched, but it isn’t more outlandish than believing that homeowners will suddenly welcome affordable multifamily housing in their leafy, conveniently located suburbs.

Meanwhile, Rognlie suggests in his paper that since “housing has relatively broad ownership,” we should not worry about its effects on wealth inequality. Zillow’s data, on the other hand, argues we should pay attention to the extreme wealth inequality between housing markets and not assume that all homeowners are benefitting from the growing importance of real estate together.