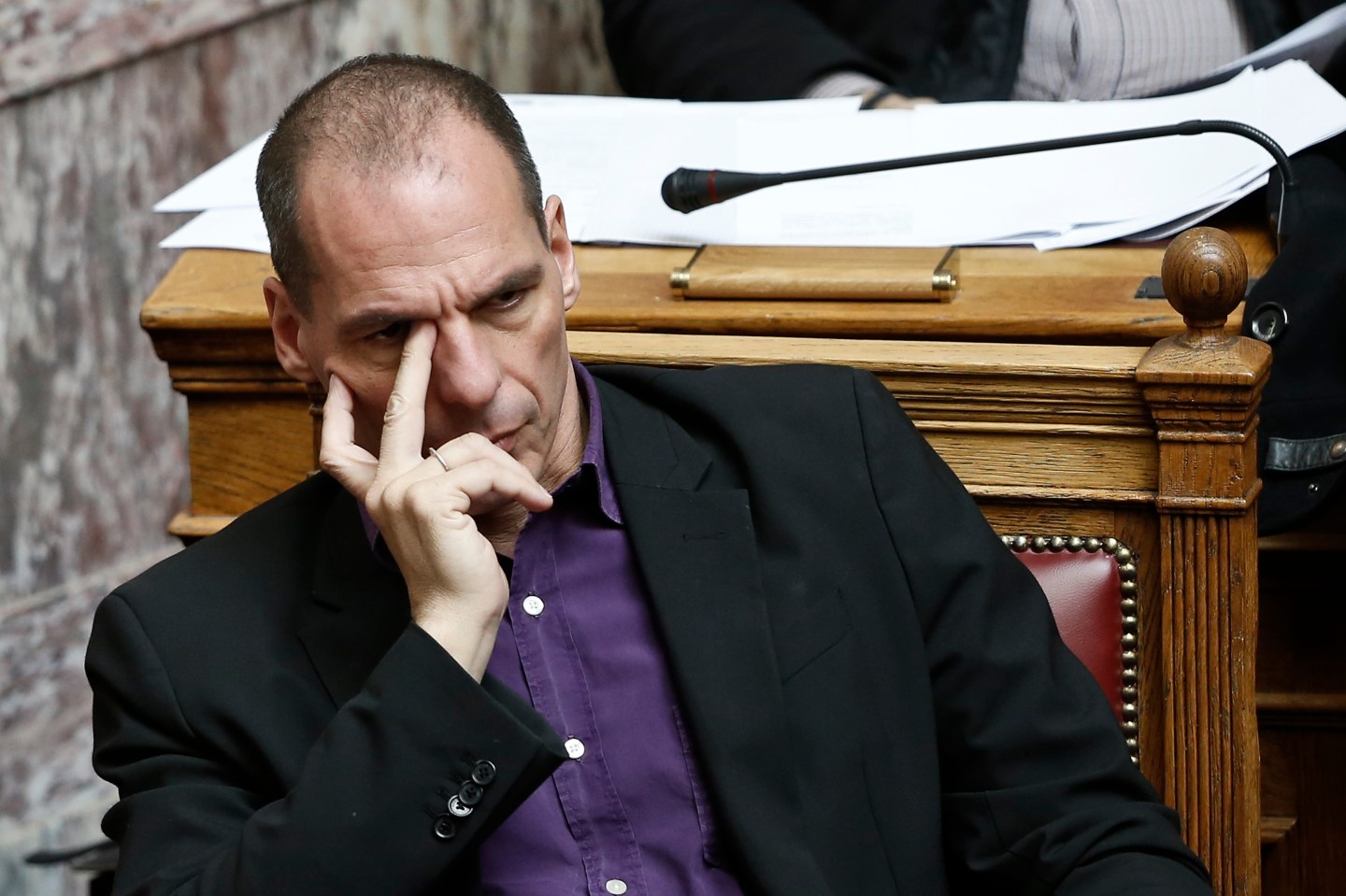 Greek Finance Minister Yanis Varoufakis attends a parliamentary session in Athens March 18, 2015. With incendiary interviews, an undiplomatic demeanour, a celebrity photo shoot and an obscene finger gesture, Varoufakis is becoming part of Greece's debt problem rather than the solution, or so his euro zone partners believe. Many Greeks regard their new finance minister as a breath of fresh air, a man who has told his colleagues in the Eurogroup a few home truths about the futility of forcing austerity policies on an economy that has endured a depression for five years. But his readiness to break the conventions of European discourse has caused consternation, and not just among the buttoned-up finance chiefs and bureaucrats who populate the Eurogroup. REUTERS/Alkis Konstantinidis (GREECE - Tags: POLITICS BUSINESS) - RTR4TV0J
Photograph by Alkis Konstantinidis — Reuters

Greece will pay a loan tranche due on April 9 to the International Monetary Fund on time, its deputy finance minister said on Friday, seeking to quell fears of default after a flurry of contradictory statements on the issue in recent days.

Greece is fast running out of cash and its euro zone and International Monetary Fund lenders have frozen bailout aid until the new leftist-led government reaches agreement on a pa ckage of reforms.

That prompted the interior minister to suggest this week that Athens would prioritise wages and pensions over the roughly 450 million euro ($489 million) payment to the IMF, though the government denied that was its stance.

Euro zone officials then said Greece told them it will run out of money on April 9, which the finance ministry denied saying.

“We strive to be able to pay our obligations on time, Dimitris Mardas told Greece’s Skai TV. “We are ready to pay on April 9.”

Athens has not received bailout funds since August last year and has resorted to last-ditch measures such as borrowing from state entities via repo transactions to tide it through the cash crunch.

The government is hoping approval of its latest reforms package will unlock remaining aid of 7.2 billion euros under its EU/IMF bailout and lead to the return of about 1.9 billion euros in profits made by the European Central Bank on Greek bonds.

Mardas said state revenue in March had topped targets without providing figures, adding that progress had been made in talks with the country’s official international on its latest the reforms list.

German Chancellor Angela Merkel has said Greece would receive fresh funds only once its creditors approve the comprehensive list of reforms Athens has presented.