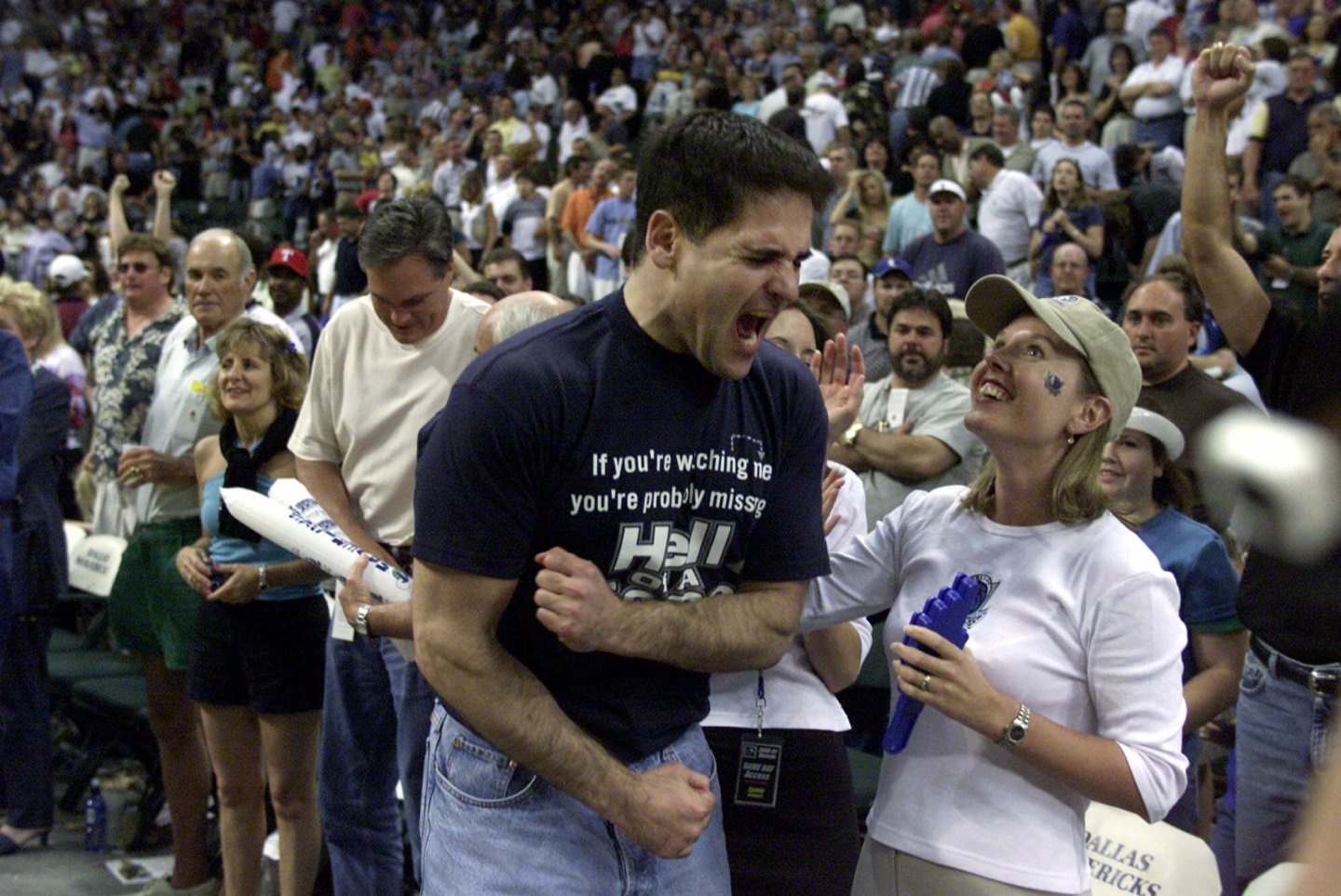 Dallas Mavericks owner Mark Cuban, left, celebrates his team's 94-91 victory over the Utah Jazz with his girlfriend, Tiffany Stewart, Saturday, April 28, 2001, in Dallas. (AP Photo/Donna McWilliam)
Photograph by Donna McWilliam — AP
By John Schmoll
Tycoons aren’t born, they’re made through determination and a relentless pursuit of growth, improvement and innovation. Our review of several modern day business and finance tycoons reveals that successful business innovators have more than brilliant minds and a strong desire for autonomy.

All four of the mentioned tycoons on our list share a defining characteristic that shaped them into the successful business moguls they’ve become – when faced with initiative-crushing defeat from first job bosses, they bounced back.

Mark Cuban is a true maverick, and not just because he owns an NBA team with that name. Today he is known and respected in many arenas – as the owner of the NBA’s Dallas Mavericks, as an Internet mogul, and as the star of the hit show Shark Tank. It wasn’t always that way. Cuban’s bright ideas got him off to a bad start at his first job converting paper transactions to digital ones for Mellon Bank in 1980. He suggested ways the company could make more money, started a networking group called the ‘Rookie Club,’ created a company newsletter and began making project updates. His boss did not appreciate his initiative.

When Cuban’s entrepreneurial spirit was rewarded with disdain, he didn’t fall in line like a good yes man. Instead, he left the bank job and moved south to Dallas where he realized his dream of starting his own computer software company that he later sold and used to build the foundation of his current fortune. Cuban continues to inspire entrepreneurs today to diligently pursue their dreams by challenging the NBA to rethink the home court experience it delivers to its fans.

Cuban continues to apply lessons learned from his first job to his current job as owner of the Dallas Mavericks. He’s always looking for ways to improve what his company offers its customers. “I have always tried to create the best possible experience for our customers in all of our businesses, the Mavs included,” Cuban says. “To do that you have to put yourself in the shoes of the customer and learn what makes the experience the most amazing, differentiated experience they could achieve for their entertainment dollar.”

After a failed attempt at fulfilling his mother’s dream of raising a doctor, Carl Icahn dropped out of medical school and in 1961 began working as an entry-level stockbroker for Dreyfus & Company. He was diligent at his work and used his insight into financial transactions to expand the concept of convertible arbitrage, which he then used to build the foundation of his considerable financial empire. By 1968, Icahn had secured a seat on the New York Stock Exchange and launched his brokerage firm, Icahn & Co., Inc.

Icahn gained stature and respect in the finance and business industries after venturing into a variety of senior level positions at companies like RJR, Nabisco and Texaco. Today he is the president of Icahn Enterprises, LP, a versatile and publicly traded company. Icahn carries such weight in the finance industry that his trading activity has garnered its own moniker – the Icahn Lift, which refers to the escalation in the stock price that occurs when he starts buying shares in a company. Icahn exerts influence on the finance industry today not just with his buying behavior but by encouraging increased shareholder activism.

The man known for ‘breaking the bank of England’ got his start in the finance industry by writing to every managing director in every merchant bank in London until he was offered an entry level position by Singer & Friedlander. Having described that experience as “lonely, forlorn and…unhappy,” all Soros wanted to do from that bank job was make enough money to retire on ($100,000) so that he could devote his time to personal interests. He learned how to make money at that first job and became very good at it. As he says, “I got sucked in to making money. One thing led to another and I got caught in it.”

George Soros is known around the world, especially in financial circles, for risking $10 billion on a single currency speculation shorting the British pound. In a single day, that trade generated a profit of nearly $2 billion. He didn’t make money only for himself. Soros also raked in returns of more than 30 percent per year as manager of the wildly successful Quantum Fund.

While Soros more than fulfilled his initial ambition of making money, he ultimately reached a point where he felt he had made enough. “When my personal wealth was about $30 million,” Soros says, “I thought, why should I keep on making money?” Finally making good on his desire to make enough money to pursue personal interests, Soros founded the Open Society Institute in 1993, dedicating his efforts to the development of open societies around the world. To date, his foundation has given more than $8 billion to support the advancement of human rights, freedom of expression and more in 70 countries.

Portrait of Peter Lynch, of Fidelity Magellan Funds, sitting at his desk

Peter Lynch is widely considered as one of the greatest investors of all time. Interestingly, his path to greatness began not behind a trading desk, but on the greens of a local country club as a caddy to many successful businessmen and investors. The relationships he formed there would not only pique his interest in the stock market, but develop connections that he would later capitalize on to get his start in the investment industry.

His first job was as an investment analyst with Fidelity. There were, as Lynch recalls, “75 applicants for three jobs at Fidelity, but I caddied for the president for eight years. So that was the only job interview I ever took.” Lynch would go on to work his entire career for Fidelity, most notably as the manager of the Fidelity Magellan Fund from 1977 to 1990, during which period he grew the fund’s assets from $20 million to $14 billion and beat the S&P 500 Index benchmark in 11 of those 13 years.

His success as an investor can be traced back to the relationships he forged and the lessons he learned during his first job as a caddy on a golf course.

What lessons can we learn from these business tycoons?

Having considered the early careers and successes of these four business tycoons, there are a few lessons that individual investors can apply to their own experiences. From Cuban and Soros, we see that a willingness to take risks and commitment to one’s personal philosophy pays off in the end. From Icahn we learn that applying personal insight to the details of one’s work can help an investor to recognize profit-making opportunities others may overlook. From Lynch we see that relationships can be critical in opening doors to career opportunities.

As a group, these tycoons teach us that we can shape our own investing journeys by gleaning wisdom from the successful habits of others.

John Schmoll writes for Credio, a personal finance site designed to help you make smart financial decisions. John is also the founder of FrugalRules.com, a personal finance blog dedicated to raising financial literacy and promoting freedom through frugality. In addition to being a Dad, MBA grad and professional blogger, John has more than 10 years of experience working within the financial services, insurance and banking industries. John has written extensively on finance, investing and credit card debt. His writing has appeared on sites such as US News & World Report and Yahoo Finance. When he is not busy talking about all things finance, John runs his owns marketing business with his wife.