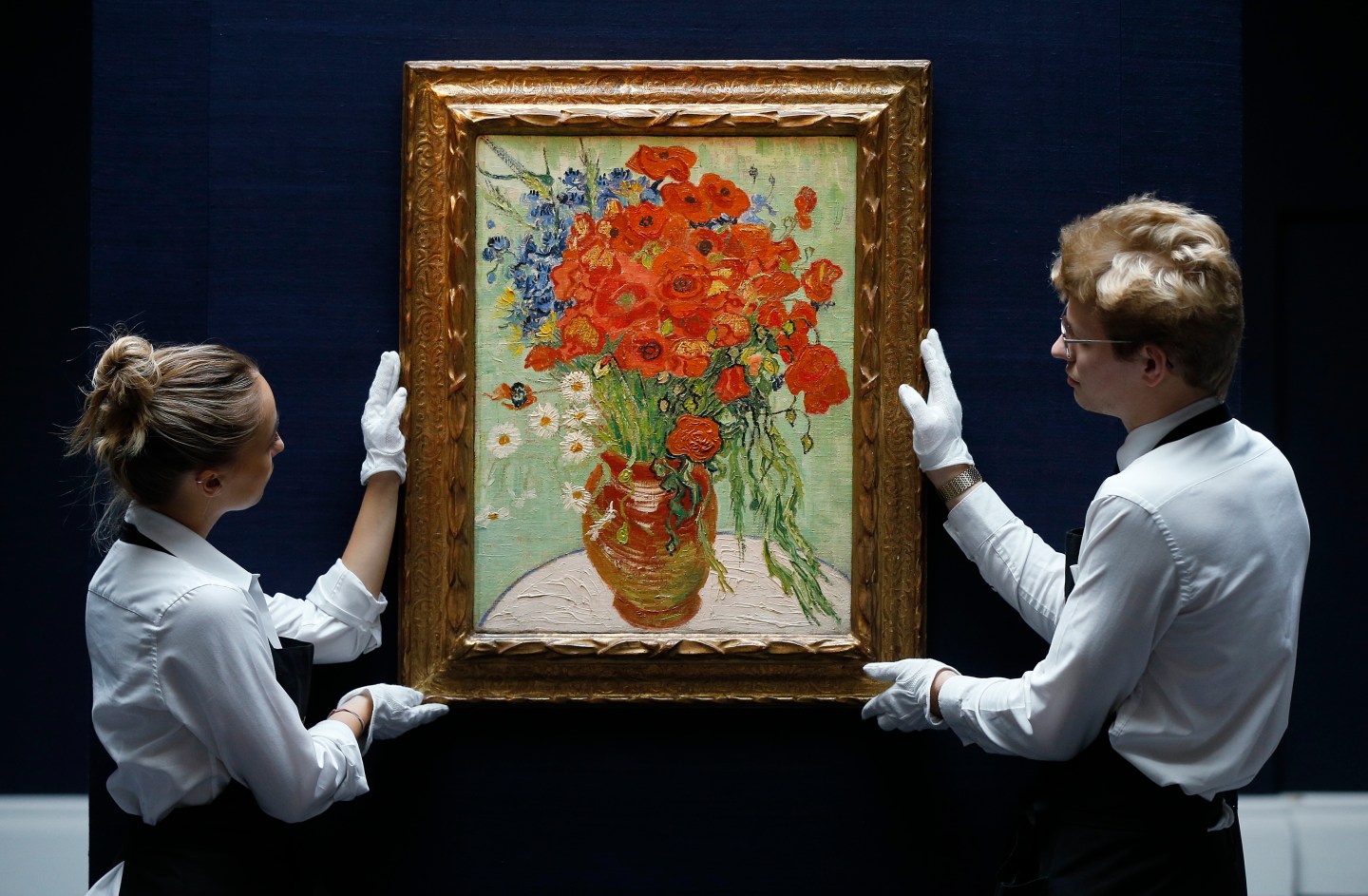 Two staff members pose in a gallery with "Still Life, Vase with Daisies, and Poppies" by Vincent Van Gogh from 1890 at Sotheby's auction house in London October 10, 2014. The artwork is estimated to sell for in excess of U.S. $ 30 - 50 million (18.6-31 million British pounds) when it is auctioned on November 4 in New York. REUTERS/Suzanne Plunkett (BRITAIN - Tags: ENTERTAINMENT SOCIETY) - RTR49PDJ
Photograph by Suzanne Plunkett — Reuters

Going, going, gone! Sold to the highest bidder at the auction, on the phone or on a new eBay platform that will stream Sotheby’s New York auctions live beginning next month.

The first auctions on the platform will begin on April 1 with photographs and a themed New York sale that will include the 13 letters of the 1970s Yankee Stadium sign that could fetch up to $600,000 from the collection of baseball great Reggie Jackson.

Online art sales are not new. Sotheby’s and its rival Christie’s conduct them. But the platform will bring Sotheby’s vast inventory to a new audience in the hopes of boosting sales and prices.

“What this partnership is about is leveraging eBay’s audience and ability to target that audience and find clients that have the means to participate in a Sotheby’s auction,” Josh Pullan, senior vice president, director of e-commerce at Sotheby’s, said.

Online sales of art and antiques are estimated to have reached 3.3 billion euros ($3.5 billion) or about 6% of global sales in 2014, according to a report commissioned by the Netherlands-based European Fine Art Foundation.

Most of Sotheby’s New York auctions will be streamed on the platform except for high-priced evening sales of contemporary, modern and Impressionist art and other specialist categories.

Sotheby’s has seen a nearly 25% rise in online bidding in 2014 over the previous year. In an auction of Picasso Ceramics, 75% of the lots offered attracted online bids.
[fortune-brightcove videoid=3819609143001]

The platform includes photographs, commentary and audio/video components. It is designed to emulate the auction catalog in a digital format and to replicate the experience of seeing art in a museum before taking bidders to the live auction where they can bid in real time.

The premier tier of inventory for art and collectibles, she added, was previously only available in the live-sale format at auction houses.