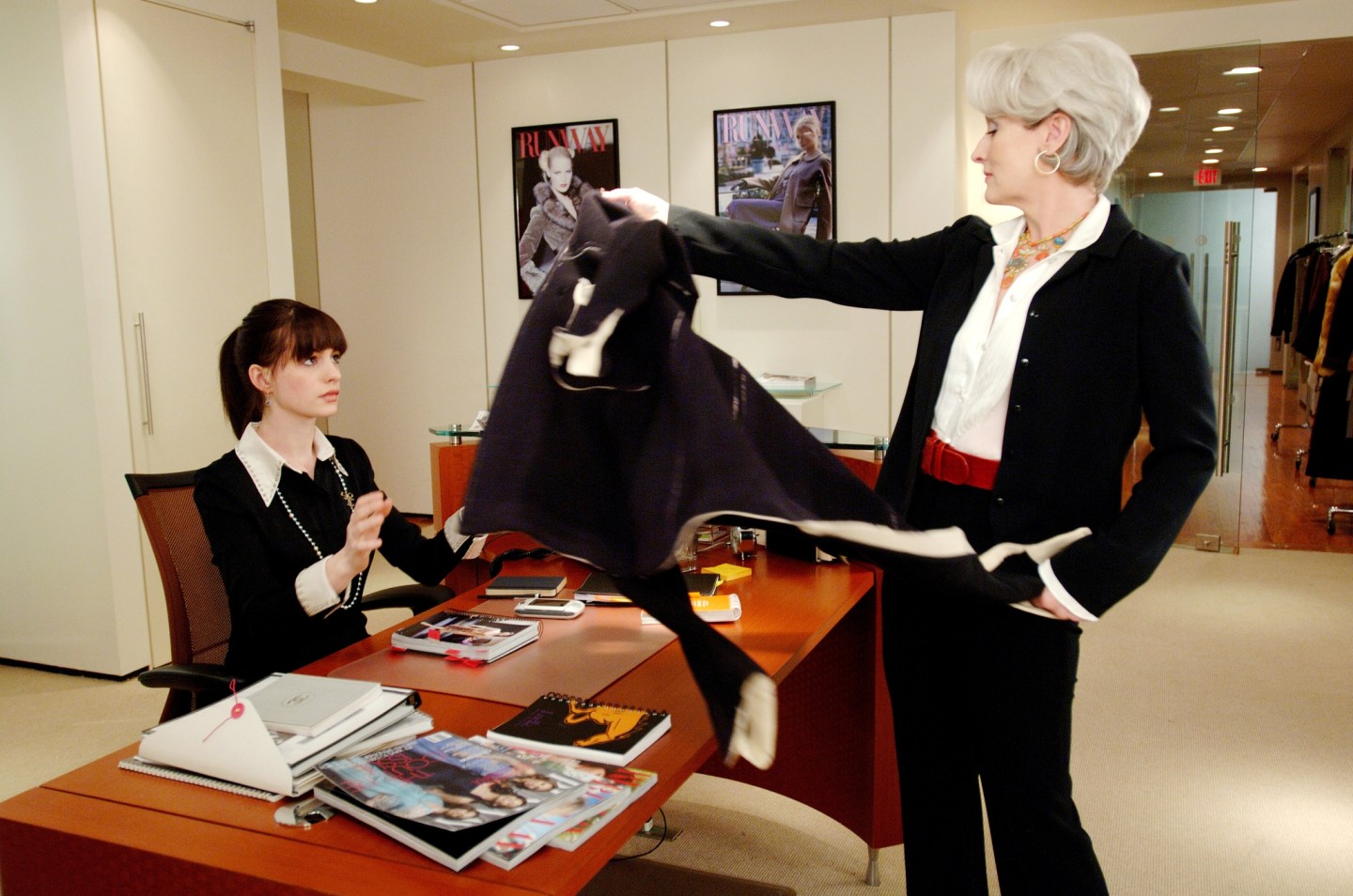 Imperious fashion magazine editor Miranda Priestly (Meryl Streep) dumps her coat on the desk of new assistant Andy Sachs (Anne Hathaway). PHOTOGRAPHS TO BE USED SOLELY FOR ADVERTISING, PROMOTION, PUBLICITY OR REVIEWS OF THIS SPECIFIC MOTION PICTURE AND TO REMAIN THE PROPERTY OF THE STUDIO. NOT FOR SALE OR REDISTRIBUTION.
Photograph by Barry Wetcher — Twentieth Century Fox

Congratulations, you got the job! Now you can begin the process of finding out what kind of people you’re really working for.

Yes, the interview went well. Yes, the person conducting it seemed sane and rational. But now that you’ve dropped anchor, you can get acquainted with the initially well-concealed but ultimately painful reality that you’re working for a bad employer.

A high turnover rate, a staff that complains nonstop, and bouncing paychecks are all signs that even the novice will spot. But what are some of the more obscure ones?

Fortune has done some of the legwork for you, to help you determine the nature of your employer while it’s still early in the game. We asked people from all across the professional spectrum to give us the telltale signs of a bad employer. Here’s what they said.

Brenda Christensen, president of Stellar Public Relations in San Francisco, said that a new boss had promised to call her with the start date of a job in a new city, to give her time to relocate. However, he didn’t call until three days before he expected her to show up.

“He seemed quite perplexed that I couldn’t pull an ‘I Dream of Jeannie’ head boink or a Samantha nose-twitch and magically appear at his doorstep on that appointed day,” she said.

Samuella Becker, CEO and founder of Tigress PR in New York City, had the same problem with an employer who wouldn’t move her start date even though she needed a biopsy to rule out breast cancer.

“I had the surgery on a Friday and started my new job as planned on a Monday, with stitches, sutures and still some pain and tenderness,” she said.

Caitlin Pyle is the founder of Orlando, Florida’s Proofread Anywhere. Before going into business for herself, she worked at a legal services company with a sadistic bent.

“Whenever someone would make a mistake, it was common practice for whoever found the mistake to take a screenshot of our system screen and e-mail it to the entire office
as a lesson,” she said.

Lori Nash Byron owns Famous in Your Field marketing and PR company in Ann Arbor, Mich. A previous workplace taught her to get out when coworkers habitually engage in deceit.

“The person who handled phone sales used a fake name exclusively with customers, which became downright embarrassing when the customers actually came to our office,” she said. “Other staffers, including the company president, used fake names with customers, prospects, advertising reps and even government sales tax auditors.”

Lunch is for layabouts

Mike Collins is the owner of the Wealthy Turtle personal finance blog. Using his foolproof method, he can spot a bad employer at 20 paces.

“Go to the parking lot at lunchtime and see how crowded it is,” he said. “If the lot is jam-packed, it likely means everyone is too busy to take lunch, or that executives expect you to work through lunch all the time.”

Don’t want no more of the crying room

Maggie Edinger of Prosek Partners communications consultancy in New York City once worked at a major cable network with a unique attribute.

“During my first week on the job, one of my new co-workers showed me what she referred to as ‘the crying room,’” she said. “This was in fact a room where people would go to cry when something particularly heinous happened in the office.”

Chris V. Nicholson, head of communications and recruiting for the San Francisco investment management firm FutureAdvisor, said you can judge a workplace by how long it takes to get simple things done.

“When it’s strangely impossible to get something done that you have easily accomplished before in other environments, then you are in a deeply inefficient workplace,” he said.

The tip of the iceberg

“If a new hire overhears a racist or sexist slur, it is likely indicative of a climate in which there are barriers to women’s and minorities’ advancement,” said Caren Goldberg, Ph.D., an Industrial Psychology Professor from Vienna, Va. She also said that sometimes, just meeting the recruiter will suffice.

“Recruiters serve a signaling function,” she said. “If the recruiter acts unfriendly or unprofessionally during the interview, it should raise some red flags about the level of professionalism in the organization as a whole.”

Check out the BEST companies to work for on our list here.