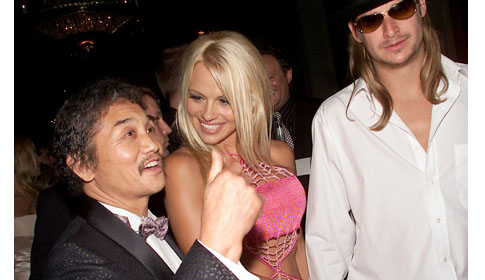 Rocky Aoki had an amazing life. For one, he dreamt up Benihana, the iconic teppanyaki restaurant where Americans go to celebrate birthdays and chefs flip shrimp tails into their shirt pockets. But the globe-trotting restaurateur also raced boats, cars and hot air balloons. He produced Broadway plays and founded a porn magazine. He fathered seven children with three women; and when he died in 2008, married to a fourth (his third wife), he left behind the sort of combustible family dynamics that gave rise to the epic, ongoing battle over his fractured restaurant empire. We unfold this extraordinary saga in “The Crazy, Bitter Battle Over Benihana,” in Fortune’s March 15 issue—but there’s more. Much more. Here are another 12 striking details about the incredible Rocky Aoki.

Rare is the photo of Aoki above the teppan table. According to his authorized biography, he could prepare only French toast. At Benihana, Aoki hired single, highly trained Japanese chefs. His employees had to complete a three-year apprenticeship program in Japan, as well as a special six-week course in English, American manners and Benihana showmanship to make the cut.

Aoki opened the first Benihana in 1964 with $10,000 he made selling ice cream from a Mr. Softee truck in Harlem. He had a pure, simple vision: he served three Middle American entrees—chicken, shrimp and steak. By 1975, he’d opened 25 restaurants and told People magazine that he dreamed of becoming a “Japanese Colonel Sanders.”

He’s in the Wrestling Hall of Fame.

A one-time member of the Japanese Olympic team, Aoki moved to the U.S. to wrestle in 1960. He won three consecutive AAU titles and was inducted into America’s National Wrestling Hall of Fame in 1995.

His wife caught him cheating when she met his girlfriend in the hospital.

Aoki had a complicated family life: his first wife met the woman who would become his second (and with whom he already had one child) at his hospital bedside in 1979, where Aoki was recovering from near fatal injuries sustained in a powerboat accident. Aoki divorced, and shared the story widely. The anecdote is even included in the comic manga version of his biography, Mr Benihana: The Rocky Aoki story. He would eventually divorce his second wife, too.

He was a deep-sea treasure hunter.

Rocky Aoki with hisco-pilots after a powerboat race.

In 1983, Rocky reportedly invested $3.5 million in a pair of ultralight submarines for the purpose of looking for “booty and bones” in waters off the coast of Japan. The expeditions were to be filmed for Japanese and British television.

He held a 34-year record for the longest balloon flight.

In November, 1981, Aoki and three other men made a harrowing and record-breaking 5,208 mile balloon ride across the Pacific. The Double Eagle V balloon set sail from Nagashima, Japan; the balloon picked up ice and floated at low altitudes across the ocean. It crash-landed 84.5 hours later in the mountains of Northern California during a driving rainstorm. In an effort to slow the balloon’s descent, the crew had thrown equipment overboard; Aoki was knocked unconscious in the landing. The whole crew was fished out the tree the following day and received by well-wishers and a mariachi band in Albuquerque. "If you are afraid to die, you are probably afraid to live," Aoki said at the time.

The Double Eagle V’s record was finally broken this January when an American and Russian flew across the Pacific.

He founded a social club for the "in crowd."

He won a world title in backgammon—only four years after learning to play.

Aoki picked up backgammon in 1970 after being invited to play by Prince Serge Obolensky, a Russian prince on the board of Hilton Hotels who was considered the father of modern backgammon. Aoki threw himself into it—he read manuals, hired experts to teach him, and played late into the night, most nights at Club Genesis. Within a few years, he was an expert himself—he won a world title in 1974 and regularly played celebrity charity matches against competitors like Lucille Ball. He continued to play at least weekly until his death.

He regularly raced in Cannonball Run.

Aoki participated almost annually in the famous road race. In 1985—when the 31-state cross-country contest was legally sanctioned and renamed “One Lap Around America”—Aoki drove a 1959 Rolls Royce that he’d souped up with two telephones, two stereos, a TV, bathroom facilities, a microwave oven and two tuxedoed chauffeurs.

He could have given Ron Popeil a run for his money.

In the early 1990s, Aoki launched Rocky Aoki’s Ultra Herbal Power Slim, diet pills that he sold through a multi-level marketing company. He also peddled $150 at-home teppanyaki tables and told the Guardian in the ’90s that he planned to sell a hemorrhoid-shrinking device.

The U.S. once celebrated "Benihana Day."

In April 1984, mayors in 49 Benihana-blessed cities across America planted trees and held festivities to celebrate the restaurant chain.

His kids are pretty famous, too.

Among Aoki’s seven kids are Steve, the globe-trotting DJ and Grammy-nominated music producer and Devon, a model/actress who was "discovered" by Kate Moss and had roles in Sin City, 2 Fast 2 Furious and D.E.B.S.