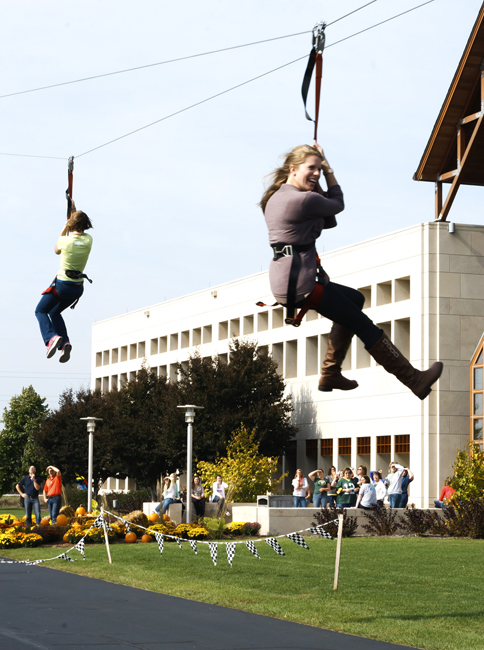 Acuity’s home office in Sheboygan, Wisc., already includes what the property and casualty insurance company says is the tallest flagpole in the United States, at 400 feet high. And when a 240,000-square-foot expansion of headquarters is completed in 2016, employees will get to ride on a 65-foot Ferris wheel—indoors.

“Acuity really put us on the map with its flag pole since you can see it as you drive on I-43,” says Sheboygan mayor Michael Vandersteen. Yes, these outside landmarks are eye-catching. But Acuity chief executive officer Ben Salzmann portrays them as gifts to the community and are a way for the company to “institutionalize” its place in it — including the spelling bee and 4-H banquet that Acuity hosts for the county every year.

Not all of those gestures have gone off without a hitch. The current flagpole is Acuity’s fourth; one earlier 150-foot version topped over due to the stress of high winds and another swayed so wildly even without a flag that the company removed it.

Founded in 1925 by farmers in Wisconsin looking to insure against the hazards of horseless carriages, Acuity, with $1.1 billion in annual revenue, makes an impressive debut at No. 3 on this year’s list of Fortune‘s 100 Best Companies to Work For, alongside global companies like Google and Boston Consulting Group.

How does it compete? On top of perks like unlimited education reimbursement, compressed workweeks, a 10% company contribution to employees’ 401(k) funds, and healthy medical plans, Salzmann says Acuity has instilled loyalty among its employees by empowering them and giving them a say in the company’s future. Quarterly town hall meetings keep employees up to speed on the company’s performance. It also sponsors a “lunch with an officer” program, in which every employee gets a face-to-face meeting with executives. The company lets employees decide which organizations receive annual charity donations—it gave away just over $1 million in the last year—and invites them to take part in strategic planning. For all those reasons, workers have raved, and annual full-time voluntary turnover is a ridiculously low 2%.

Yet the best example of employee enthusiasm and loyalty can be found on YouTube in a short video bearing the title ACUITY Zombie Apocalype. It’s the collaborative work of 40 employees who dressed as the undead for a four-minute explainer about why they love their jobs. The video’s tagline? “Acuity is a great place to work now … and after the zombie apocalypse.” It took one day to film and two weeks to produce, all during working hours.

In addition to welcoming oddball initiatives, employees say their suggestions are taken seriously and their contributions are rewarded on more individualized bases. Stephanie Schreiber, general manager of commercial lines underwriting, says she recently noticed that her department was getting rather big—Acuity has hired 124 employees in over the last 12 months—and “it was harder for us to get to know everyone,” Schreiber says, so she suggested a department-wide cookout so workers would have a chance to get to know each other. Her manager obliged. “That’s something very simple,” she says.

Check out Acuity’s perks on our 100 best companies to work for list here.

A shorter version of this story appeared in the March 15, 2015 issue of Fortune.