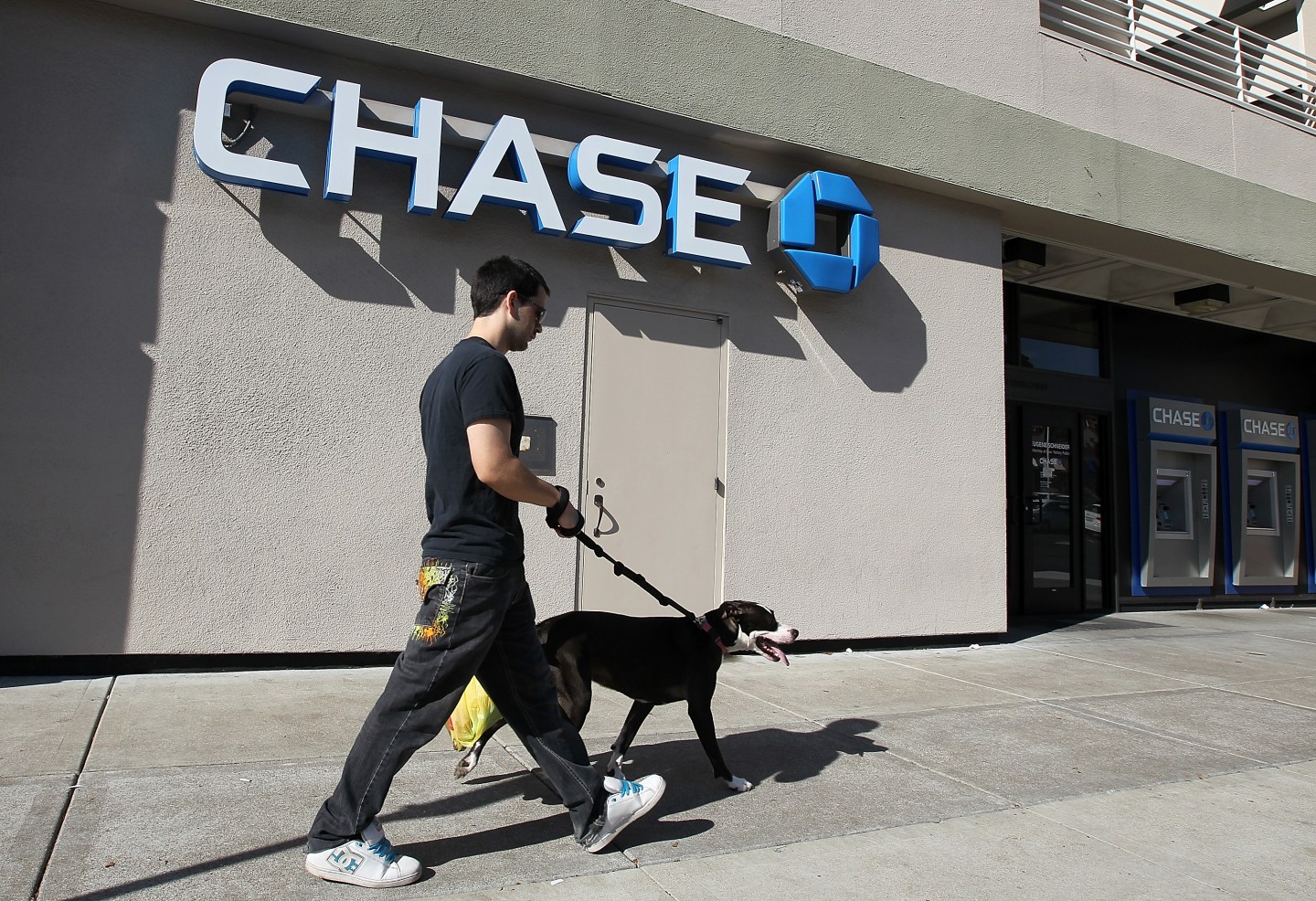 OAKLAND, CA - OCTOBER 13: A man walks his dog in front of a Chase bank office on October 13, 2011 in Oakland, California. JPMorgan Chase & Co. a nearly 33 percent decline in third quarter profits with earnings of $3.1 billion compared to $4.71 billion one year ago. (Photo by Justin Sullivan/Getty Images)
Photograph by Justin Sullivan — Getty Images

JPMorgan Chase’s CEO Jamie Dimon wants investors and regulators to know that his bank is not about risky whale-sized derivatives trading. What is JPMorgan Chase really about? Serving regular Americans, who love dogs.

On Tuesday, at JPMorgan’s annual investor day, Dimon stressed how dog-friendly the bank’s branches are. “Around the country, people bring in their dogs and sit around for social reasons,” said Dimon. “We give out little doggie bones.”

The bank’s event was packed with six hours of presentations from top executives and included plenty of PowerPoint. There were 78 slides on the company’s consumer banking operation alone. But Dimon’s dog biscuit statement got more responses on social media than just about anything else that was said during the day:

@carney @matt_levine @ReformedBroker this is american banking at it’s best! free coffee, pens, and dog treats for everyone

Turns out JPMorgan (JPM) is indeed pretty dog friendly. In fact, a lot of banks are competing to be America’s friendliest bank to man’s best friend.

Dimon’s “doggie bone” statement, though, is only mostly accurate. Not every branch is giving out treats. There are two Chase bank branches within a quarter mile of my midtown Manhattan office. Both say customers are welcome to bring in their dogs to make deposits, get money orders, or socialize. But neither one has doggie treats. That could be because there aren’t a lot of people looking to socialize with their dogs in midtown Manhattan. The people I talked to at all three branches seemed to know that dog treats were available at other branches. An employee at the Chase branch at 96th and Broadway, on Manhattan’s Upper West Side, told me about the dog treats when I asked if I could bring in my dog. (Full disclosure: I don’t actually own a dog.)

A reporter at Fortune who does have a dog and is a Chase customer says she regularly gets dog treats when she goes in to a branch, but she has to ask for them. (Her dog now wants to go banking all the time.)

Rover.com lists Austin first on its list of America’s most dog-friendly cities. An employee at a Chase bank branch in an office building in downtown Austin says it has dog treats, but that I would need to use the entrance in the back of the building. The guard at the front entrance, which is also used by other tenants, does not allow dogs in the building. One Austin dog owner, though, seems happy with her Chase experience.

I’m not sure if being dog friendly and handing out treats gets banks customers, but a lot of banks seem to think that it will. The trend appears to have been started by Commerce Bank, which, according to Wikipedia at least, gave out lollipops as well, though not for dogs. TD Bank (TD), which bought Commerce in 2007, mentions that it has dog biscuits available on the about page on its website. I did not find any similar language on JPMorgan’s website. The Wells Fargo (WFC) branches I called told me they offer customers dog treats.

The one exception among all these dog-loving big banks is Citigroup (C). An employee at the Citibank branch six blocks south of my office told me that, other than for blind customers, dogs are not allowed in its branch. I got the same message from other Citi branches. One asked me how big my dog was, which was hard to answer because I don’t have a dog. A staffer at a Citi branch in San Francisco, which is also listed on Rover.com as a dog-friendly city, told me that dogs are allowed in the bank as long as they are leashed. No treats.

Jamie Dimon has been talking about dogs quite a bit lately. On the bank’s most recent earnings call, Dimon said JPMorgan would do just fine as long as the firm “stops stepping in dog shit, which we do every now and then.” I believe he was speaking metaphorically. Then again, maybe this has something to do with all the dog socializing going on at JPMorgan’s branches?

JPMorgan has another kind of canine connection. The Oscar-winning film Dog Day Afternoon is based on a 1972 bank robbery of a Chase branch in Brooklyn. The movie has nothing to do with actual dogs.