36 hours later, Greece starts to backtrack on its promises 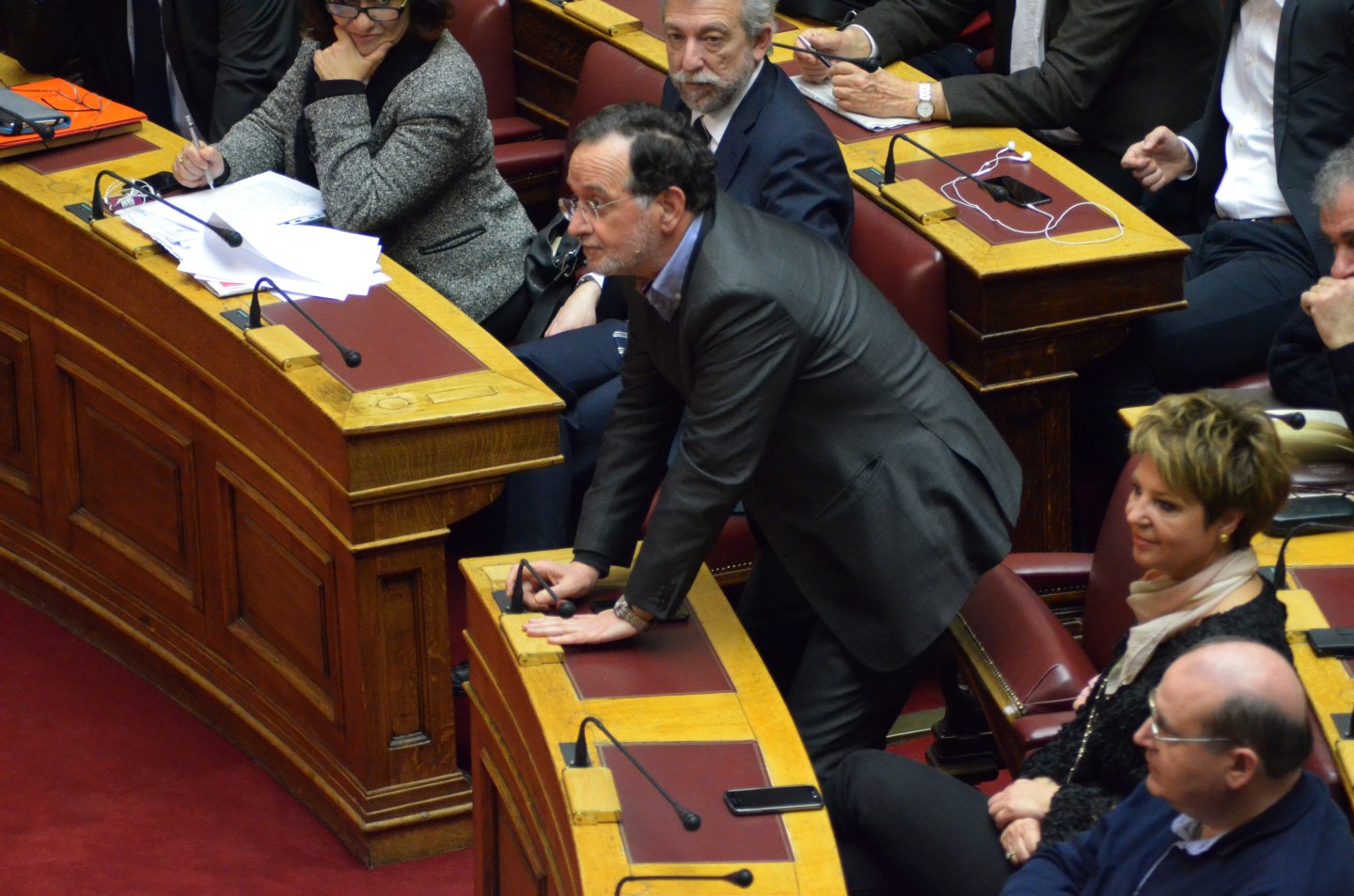 ATHENS, GREECE - 2015/02/18: MP with SYRIZA political party Panagiotis Lafazanis votes Prokopis Pavlopoulos as the New President of the Greek Democracy.Legislators of the Greek parliament voted for the new President of the Greek Democracy. From the 295 present 233 voted for the Center Right Moderate candidate Prokopis Pavlopoulos that was nominated by SYRIZA political party. (Photo by George Panagakis/Pacific Press/LightRocket via Getty Images)
Photograph by George Panagakis — Pacific Press LightRocket via Getty Images

This has to be close to a new record, even for the Greek crisis.

Yesterday, the Greek government and the Eurozone, as is the way, papered over their differences with some vague promises of willingness to work together. Today, the fragile peace is already unraveling.

The simple truth is: Syriza came to power on a promise that Greeks could have the euro but not the bailout. No-one in any position of power on the other side of the negotiating table accepts this. The diplomatic skirmishes of the last two weeks have merely bought Athens two months in which to decide whether they are going to accept both, or neither.

Already on Tuesday, two of the three institutions for policing Greece’s bailout had voiced reservations that the promises of good behavior from Athens weren’t likely to hold.

While the Eurozone and European Commission gleefully accepted the letter as a “valid basis” for further negotiations, the party-poopers at the European Central Bank and the International Monetary Fund both publicly said they didn’t like the lack of detail in the plans, and they really didn’t like what little detail was in them.

“The commitments outlined by the authorities differ from existing program commitments in a number of areas,” ECB President Mario Draghi said in a letter to Eurogroup chairman Jeroen Dijsselbloem.

“I would also again urge the Greek authorities to act swiftly to stabilise the payment culture and refrain from any unilateral action to the contrary,” Draghi said.

IMF Managing Director Christine Lagarde, meanwhile, fretted that there were no “clear assurances” on reforms ranging from pension and VAT reform to opening up closed professions.

Tellingly, both letters were published, rather than leaked, giving the impression of a choreographed response that makes the boo-boys in Brussels and Berlin look like the (relatively) good guys in this particular leg of the blame-shifting game.

Some might argue that this is just to be expected from two bitter and selfish participants trapped by the mistakes of the ruinous bailout program they handed down to Greece three years ago, too timid to let Athens seek a different way out of its crisis.

But the Greeks took less than 36 hours to prove their fears right.

Reuters Wednesday reported Energy Minister Panagiotis Lafazanis, a veteran of the hard left and a highly influential figure in the Syriza party, as saying Greece will stop the privatization of its dominant electricity utility, the Public Power Corporation, and power grid operator ADMIE.

That’s a clear breach of the promise Finance Minister Yanis Varoufakis made Monday to carry on privatizations that were already underway. (PPC has already launched a tender to sell a 66% stake in its power grid operator ADMIE, and both Chinese and Italian grid operators have expressed interest.)

But it’s also clearly in line with Syriza’s election campaign promises to halt all privatizations.

In short, the gulf between what the creditors want (full implementation of the bailout in return for more loans) and what Athens wants (to rip up the bailout and start again) is effectively as wide as ever.

The contradictions between the two will become increasingly obvious as the clock ticks down over the next two months. The clock might tick down even faster if Greeks continue to pull their deposits from local banks. But at the end of April at the latest, Athens has to flesh out the proposals it sent in yesterday in a way that satisfies the creditors, or start thinking about a future outside the Eurozone.