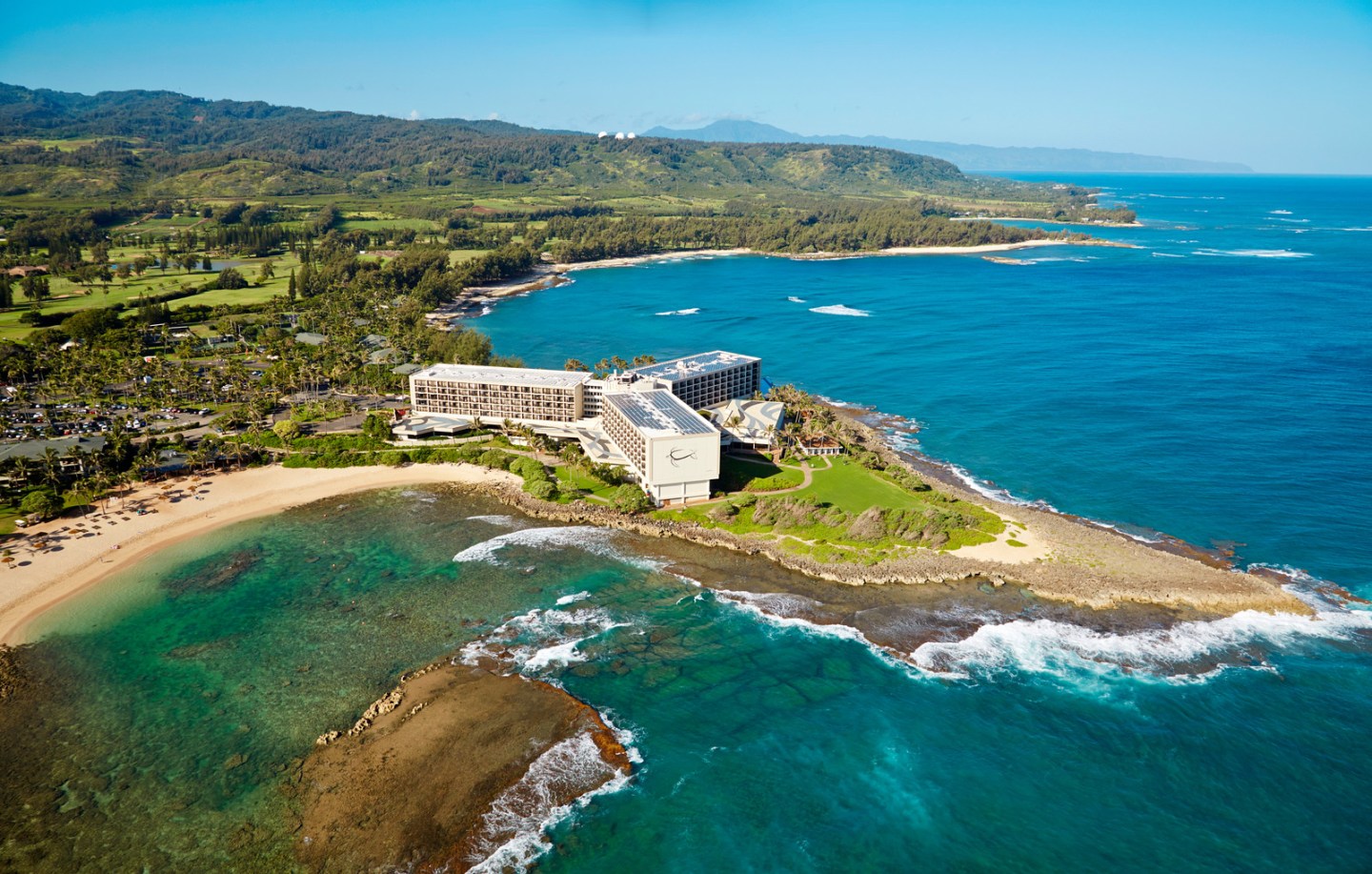 One of the updates during Turtle Bay’s recent $45-million renovation on Oahu’s surf-haven North Shore was to rename the concierges. “We use the term ‘Guidepost,’” explains their leader, Rockwell “Rocky” Canon. “We perform as a concierge without sounding or looking like one.”

Born and raised on the North Shore, “surfing in the winter and paddle racing in the summer,” Canon knows his way around the waves. He started at Turtle Bay as a surf instructor in 2010 and quickly became a guest favorite for his engaging personality. “When the family of hotel had their family come down, I was the one teaching their surf lessons. So when the idea came up to overhaul the concierge experience they felt like I had done that already with surf school experience and could help apply it to everything else at hotel.” Outside the hotel, here’s where you’ll find him.

Surf Break: My favorite surf break is Pipeline in the core of the North Shore. The waves are as tall as three, four stories high and break only about 100 yards from the beach. It’s a pretty awe-inspiring wave and even if you don’t surf, watching experts surf this wave is pretty amazing. Surfers from around the world come to challenge it because if you make the wrong move you can get badly hurt, but make the right move you can have the wave of your life.

Hidden Beach: You park on the roadside and walk five minutes through a forest to get to the beach at Kewala Bay on the western end of Turtle Bay’s thousand acres. It’s totally hidden from the road and is on conservation property for eternity, so there’s never going to be any buildings built there. It’s one the only beaches you can swim safely at year-round on the North Shore. The 40 seat turtles that live in the bay are pretty docile, too; you can paddle out and see them.

Toughest Dinner Reservation: It’s pretty hard to get into Haleiwa Joe’s because they don’t take reservations. It’s a local hotspot right on the boat harbor here with tons of fresh fish and a mix of Hawaiian, Asian and American styles. The space is laid out in an L-shape. One side is the bar and the whole other part is the restaurant, so you’ll have a game on the bar and it will fun and festive, while around the corner there’s dinner in a quiet dining room with a view of harbor.

Favorite Food Truck: Shark’s Cove Grill is really good. The truck is parked right at Shark’s Cove, and the ocean view from their picnic tables is pretty awesome. They do healthier versions of a plate lunch: seafood, brown rice instead of white and a salad made with fresh greens from the North Shore. Their ahi skewers are unreal. Once in a while they’ll have shrimp and my favorite fish, striped marlin.

Farmers’ Market: Every Thursday is the Haleiwa Farmers’ Market. It’s part farmers’ market, part crafts showcase, with live music in the open-air pavilion. All the fruits and vegetables are grown on the North Shore: lettuce, kale, microgreens, tomatoes, papayas, mangoes, avocadoes… Last week I got an awesome freshly baked loaf of wheat bread. There are probably close to 40 or 50 vendors. It’s a place you can definitely roll up with an empty stomach.

Locals’ Secret: Typically, east-northeast winds make the famous part of the North Shore spectacular for surfing. But when the south-southwest Kona Winds come, usually November to February, the entire North Shore starts to open up. For surfing it opens up a lot of spots that aren’t usually available, and the coast expands from the Seven-Mile Miracle to the 27-Mile Miracle.

Must-Have Souvenir: You have got to bring back a real pair of rubber slippahs, our version of flip-flops. They’re slippers, but we spell and speak like it you with Boston accent. They’re only four bucks in the store, but they’re like gold around here. There’s a brand called Local—I’m looking out my door at a pair right now—and another brand called Surfah. Growing up you either had both or either one. My friends would mix and match: one side Local, one side Surfah.

Best Room in the House: Our one-bedroom beachfront cottages are really private and situated so you have the ocean footsteps from your door. The only view when you walk out your back door to the little porch, the ocean is the only thing you see. It’s pretty special.

Favorite Hotel in the World: Hilton Hawaiian Village. “They have penguins!”

Next Vacation: “South Africa for safari not surfing. I refuse to surf in cold water.”

Most Outrageous Guest Request: Waves in July. “The ocean is like a lake in the summer.”

A Great Concierge Is: Vigilant.

We asked Rocky Canon to plan us a single, singular day on the North Shore…

It would begin with a sunrise helicopter tour of Oahu on our custom MD-500 Magnum P.I. replica, complete with a landing on top of Kualoa Ridge with amazing views. Once landed on the grassy ridge, a nice light breakfast would be brought along to have on the mountain ridge as the sun warms up the day.

Our chopper would then fly you back to Turtle Bay Resort, where the Hawaiian Water Patrol, an elite team of surf rescue specialists on jet skis, accompanied by pro surfer Makua Rothman would be waiting for your personal tour of the North Shore by sea.You would see the views only few people in the world get to see, with big waves breaking nearby but in complete safety in the hands of the best water safety experts on the planet. Makua would even go catch a few waves for you to watch.

If you’re a surfer, the Hawaiian Water Patrol team would take you to some of the best waves only realistically accessible by boat or jet ski. After you’ve had your fill of waves and spectacular views of the ocean, the jet skis would take you out to another vessel where you would meet up with expert shark diver Kimmy Werner for an unforgettable shark dive experience.

The jet skis would then buzz you in to Haleiwa Joe’s right on the boat harbor for a custom lunch. After lunch you would be transported by luxury vehicle back to Waimea Valley for a private guided hike to a waterfall with Hawaiian culture expert Hoku Haiku. Then back Turtle Bay for an exquisite seaside couples massage. After some relaxation time at the spa being tended to hand and foot, you would enjoy a private sunset horseback ride to the beautiful, secluded Kawela Bay where a custom, catered dinner will be waiting along with live music by Na Hoku Hanohano and Grammy Award winner John Cruz.