Greece to ask for bailout extension – but asking isn’t getting 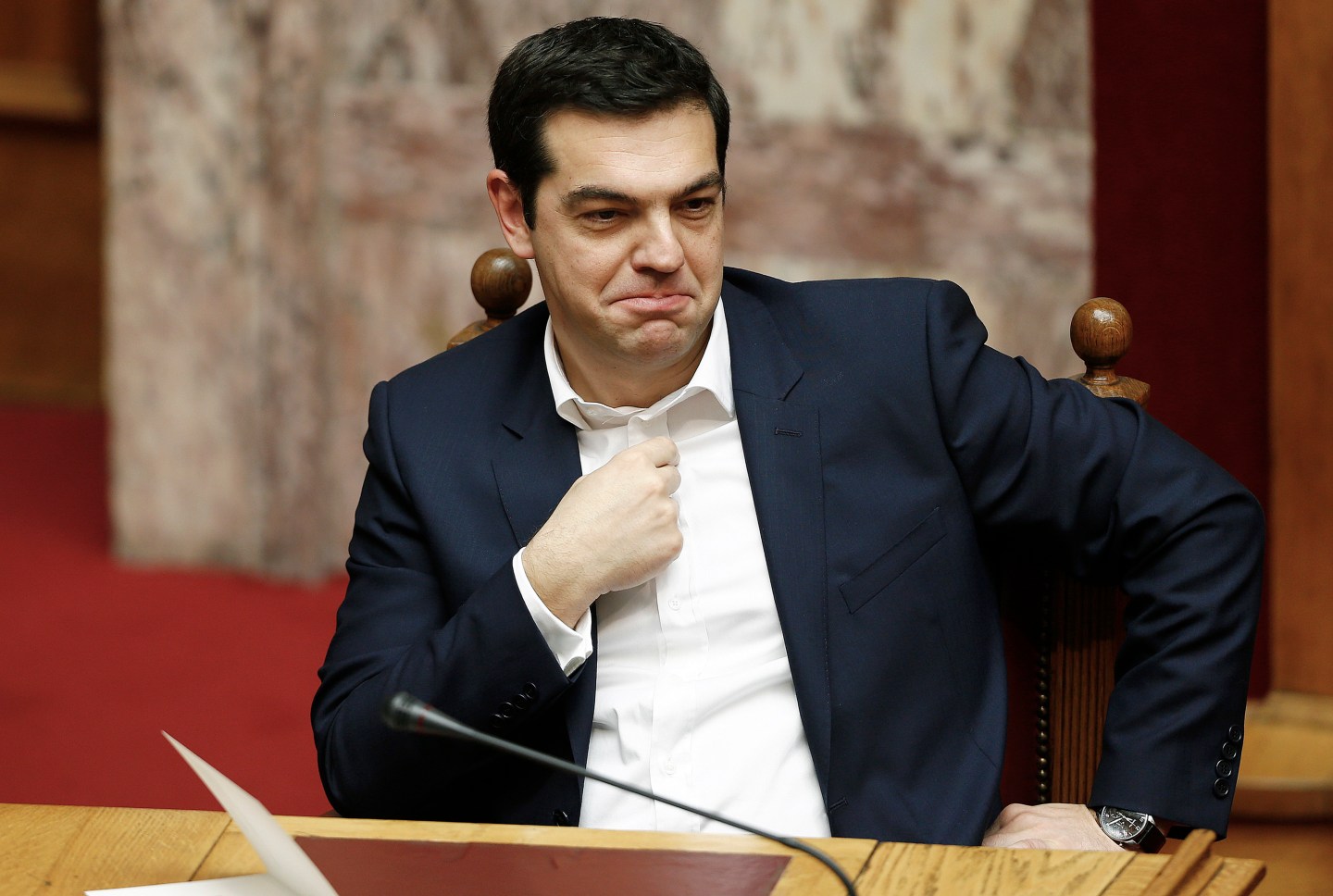 Alexis Tsipras, Greece's prime minister, sits and waits ahead of the swearing-in ceremony for the new government held in the Greek Parliament building in Athens, Greece, on Thursday, Feb. 5, 2015. Greece held fast to demands to roll back austerity as the European Central Bank turned up the heat before Finance Minister Yanis Varoufakis was to meet one of his main antagonists, German counterpart Wolfgang Schaeuble. Photographer: Yannis Behrakis/Pool via Bloomberg *** Local Caption *** Alexis Tsipras
Photograph by Yannis Behrakis — Bloomberg/Getty Images

It’s a feature of the Eurozone negotiating ritual that the news is almost never as good or as bad as it seems.

Never as good, because generally, behind the high-flown language, there is a shabby compromise waiting to have its inconsistencies and shortcomings exposed by time; never as bad, because the endless dramas and compromises really do overshadow a belief, still profoundly held by most on the Continent, that they are better off together.

It’s against this reality that Wednesday’s news of a Greek request for an extension to its loan agreement should be measured.

At first sight, the request suggests that the Greek government, led by the radical left-wing Syriza party, has accepted the weakness of its negotiating position and realized that it has no short-term alternative to the Eurozone’s painfully conditional loans. That realization should allow a deal that allows Greece to stay in the currency union and gives Athens some modest leeway to make it more palatable to its voters.

But, as non-Greek officials were quick to point out after Monday’s acrimonious meeting of finance ministers, asking for an extension isn’t the same as getting one. Athens has to explain how it will comply even with a slightly amended or relaxed version of the bailout. And that is still a big problem, mainly because what the Greek finance minister is telling his partners in Brussels is still not what the Greek government is telling fellow Greeks.

Varoufakis told a press conference on Monday night he would gladly have signed a draft solution proposed by European Commissioner Pierre Moscovici that would have offered a four-month “bridging period” to a new deal, but prohibited the government from reversing any of the reforms imposed so far under the bailout deal (and obliged it to carry on honoring all its debts).

But back in Athens Tuesday, PM Alexis Tsipras vowed to roll back deregulation of the labor market, one of the main reforms of the bailout. He also said he will present a new bill stopping banks from foreclosing on loans against primary residences, according to the Greek newspaper Kathimerini. (Eurozone officials grumble privately that the government is already pressuring the banks to be too easy on their bad loans.)

Then there’s the question of how the new government’s performance will be monitored. One of the key demands of Athens is for an end to the humiliating visits of the ‘Troika’–technocrats from the ECB, the IMF and the European Commission. But Athens’ implementation of the program has consistently lagged the program’s timetable, and it seems unlikely that its record will improve with reduced oversight. (Athens also ignores the fact that ‘technocrats’ are responsible for implementing political agreements the world over.)

Under Moscovici’s proposal, the Commission alone would have sent “technical assistance to Greece to strengthen and accelerate the implementation of reforms,” but only “when considered useful.” It’s hardly surprising that that formulation, which aggrandized the role of Moscovici’s own staff and marginalized the other partners, was rejected outright by the Eurogroup and the ECB. It didn’t even spell out who would decide whether or not a visit would be “useful”.

But despite the differences, there is room for an agreement–if there is the political will. Specifically, the creditors look likely to agree to Syriza’s demands that the budget target for this year is relaxed. The original target was for a primary budget surplus of 3% of GDP this year, rising to over 4% in the medium term, whereas Varoufakis wants it capped at 1.5%. And as long as Athens presents detailed and credible plans for shoring up tax collection (Varoufakis estimates tax arrears have reached €70 billion, around 28% of GDP), then the government will surely get the leeway for measures aimed at relieving the pain of the poorest.

But any deal agreed in the short-term is destined to be just that: short-term. It doesn’t make the underlying disagreement over whether or not Greece is bankrupt or solvent go away. The second bailout in 2012 managed to kick the can two and a half years down the road. Any deal this week will only buy another four months. And then it will start all over again.