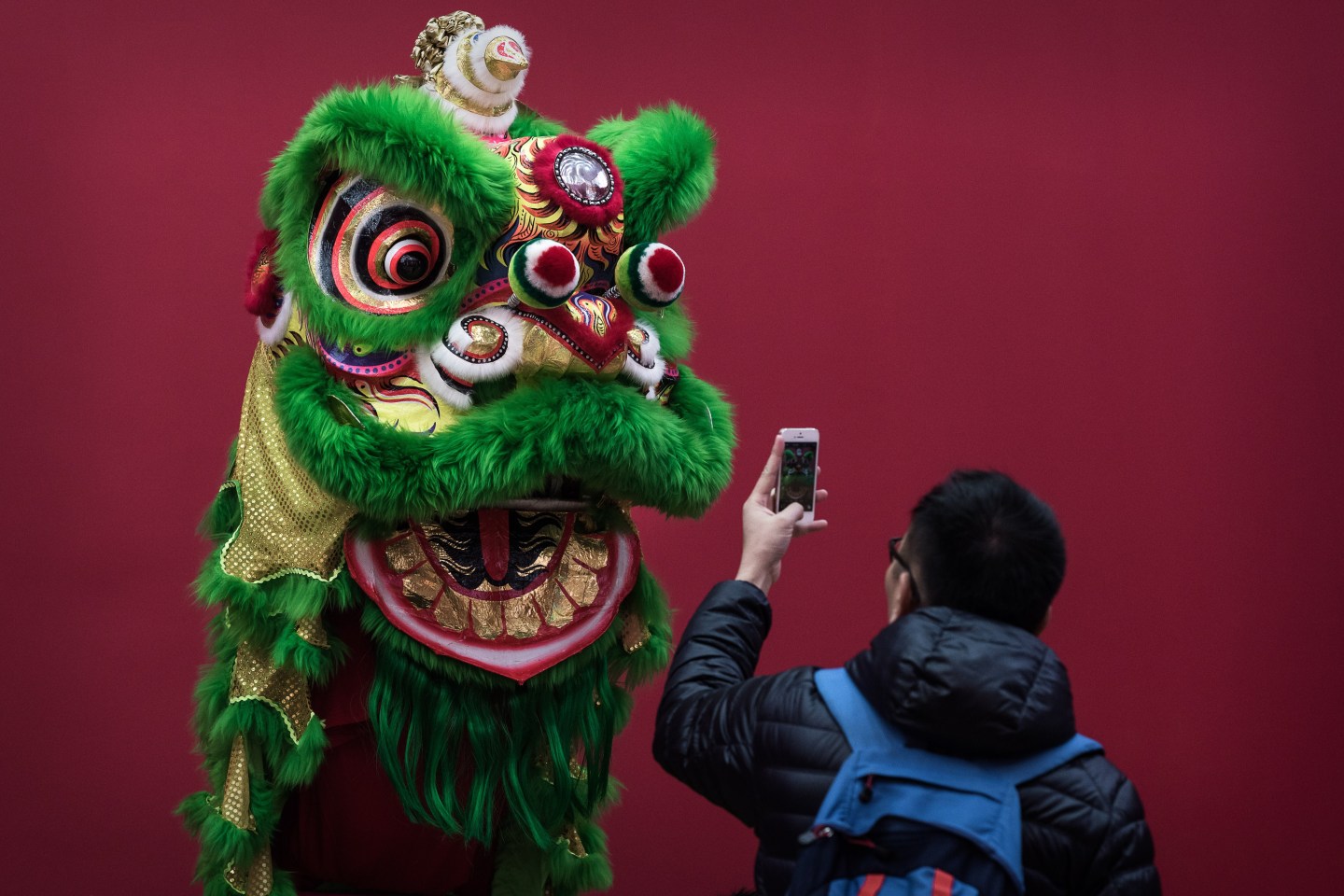 A man takes a picture of a hand-made decorative lion head in Hong Kong on February 9, 2015, during an exhibition about the traditional lion dance which is performed in many countries of Asia during the Chinese New Year. The Chinese lunar new "year of the sheep" begins on February 19. AFP PHOTO / Philippe Lopez (Photo credit should read PHILIPPE LOPEZ/AFP/Getty Images)
Photograph by Philippe Lopez — AFP/Getty Images

The Chinese Near Year begins Feb. 19, and American businesses hoping to reach more customers (Asian and non-Asian alike) are planning to mark the holiday with promotions designed to bring in the money.

Traditionally, gifts of red envelopes filled with cash are given to loved ones on the holiday for good luck. In the Chinese zodiac, each Lunar New Year, which is celebrated by many Asian cultures, is associated with one of 12 animal signs. This is the Year of the Sheep (also referred to as the Year of the Ram or Goat).

To mark the occasion, Panda Express, the nation’s largest Chinese restaurant group, is giving out red envelopes to customers stuffed with coupons for either a free soda or a free order of Firecracker Chicken Breast. Peggy Cherng, co-founder and co-CEO of Panda, will also be passing out red envelopes filled with a fresh $1 bill to every employee at its Rosemead, Calif., corporate headquarters.

Godiva is selling limited edition Year of the Goat gift boxes, with sweets that combine its traditional Belgian chocolate with edible flowers and exotic root flavors. Chase Bank is giving out traditional Chinese calendars and red envelopes to customers who want to give out their own gifts of money.

So what kind of economic year can we expect?

Doris Ingber, an expert in feng shui and 4 Pillars Analysis (a branch of Chinese astrology), says 2015 will be a year dominated by the economy.

“We are at a turning point in the 12-year cycle,” says Ingber, who has offices in New York and Norwalk, Conn. “The energy of wood, which represents the economy, is beginning to flower. Unemployment is down, wages are moving up, and costs have stabilized or lowered.”

Ingber says she’s often called in by businesses for staffing issues, and after the fact, when a company’s strategy isn’t working.

“In China, they look at feng shui and astrology first, before putting together teams of people and designing spaces,” Ingber says. “There’s still a bit of woowoo-ness to this in the United States, so many companies still don’t talk about using it.”

Ingber says she left a career in fashion merchandising in 1999. “I took the sales figures, looked at what went on in the past, and looked at what was coming in the next cycle,” she says. “Now, I’m dealing with the science of intuition, and use software programs for feng shui and Chinese astrology to analyze information.”

Ingber, whose clients include investment advisers, designers who work with commercial and residential properties, healthcare providers and others, says portfolios should remain diversified to produce steady growth. “Be cautious,” she says. “This is not a year for risk.”

She explains that five elements (Wood, Earth, Fire, Metal and Water) affect everyone, and that the energy of each element can relate to industries.

The Chinese astrology expert says Wood industries should do well this year, as the element — which represents growth and change — dominates 2015. That makes this the Year of the Wood Sheep.

Wood industries include architecture, manufacturing with natural products, fashion, food, publications like newspapers, magazines and books, and education. “Those who listen and communicate with their customers will thrive,” Ingber says.

Fire industries, she notes, are a safe bet, and include electricity/power companies, restaurants, the performing arts, entertainment, military and defense companies.

Metal industries are weak, including banking, technology (hardware), automobile manufacturing, engineering, and entrepreneurs or CEOs. “Companies and their leaders need to be more nimble, quick and flexible this year,” Ingber says. “This year’s energy supports those who are humanitarian and lead from a team-building orientation.”

Lastly, water industries are weak now, but are good investments for the future, she says. Service providers, transportation, tourism, and health care practitioners will not have a great year, but if businesses act with long-term gains in mind, they will show great strength in 2019, the Year of the Pig.

Clashing elements this year, Ingber notes, indicate more national and global discord, but conflicts will be less violent than in 2014. Dry, hot areas of the world and summer months will see flare-ups, but Ingber is optimistic that treaties and mergers will come out of the conflicts.

Politics will take center stage, affecting the economy and vice versa. The key to settling conflicts include bi-partisan alliances, global cooperation, and team-building in the workplace. The stock market will perform similarly to last year, she adds.

While some industries may be predisposed to do better than others this year, everything depends on the individuals in the teams that leaders choose, she adds.

“I’d want people in sales and marketing to have fire in their chart,” she says. “A CEO will need to have metal. The designer should have wood. In a year that’s all about money, the opportunity for prosperity is there for everyone, if we take advantage of it.”

Meanwhile, here are Ingber’s tips for creating prosperity in this Year of the Wood Sheep:

* Home, food, clothing and comfort are a priority… surround yourself with beautiful, quality things, or make sure that what you produce is done with quality materials;

* Be responsible in your decision-making… be the shepherd; and

* Focus on charity and humanitarian acts… the sheep will reward you.