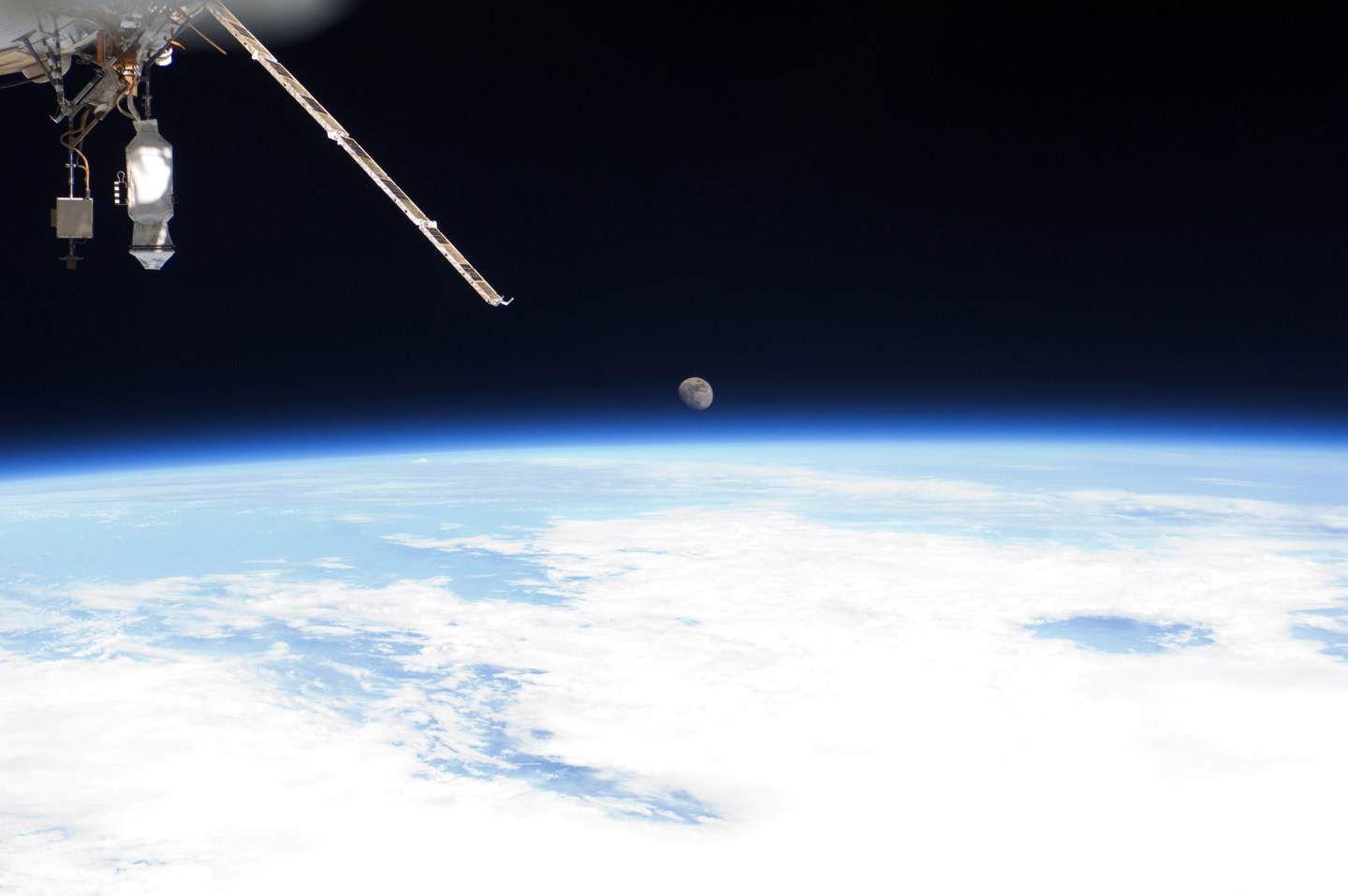 IN SPACE - JULY 12: In this handout image provided by the National Aeronautics and Space Administration (NASA), Earth's horizon and the moon can be seen from the International Space Station July 12, 2011 in space. Space shuttle Atlantis is on the last leg of a 12-day mission to the International Space Station where it delivered the Raffaello multi-purpose logistics module packed with supplies and spare parts. This was the final mission of the space shuttle program, which began on April 12, 1981 with the launch of Colombia. (Photo by NASA via Getty Images)
Photograph by NASA — Getty Images

Something’s up with the environment. Sea levels have risen nearly seven inches in the past 100 years, and Arctic ice sheets are shrinking at about 13% a decade, according to NASA. Meanwhile the earth’s surface temperature has been climbing steadily upward, says the University Corporation for Atmospheric Research. But it’s also the era of using big data to find ways to solve environmental problems. Crunching data already helps with reducing traffic jams and lowering crime rates. So why not climate change? Here are five big data projects that could make a difference.

Lake Urmia, a large salt lake in Iran, is a deep teal blue in a satellite video from 1984. A few years later, a similar image shows a much smaller lake with a green hue. By the time the video ends in 2012, the lake is a phosphorescent streak of brown. Google Earth Engine, a service from Google, compiles publicly available satellite imagery like the images of Lake Urmia for researchers to spot environmental damage and fix it. Using Google Earth Engine Brazilian scientists have been able to track deforestation in the Amazon. According to Rebecca Moore, a manager at Google Earth, the biggest challenge of working with outside researchers is they typically don’t appreciate the scope of the data. “They are thinking too small,” she said. “We have to say, you can have an analysis for the entire continent for 40 years.”

Researchers at work on the Madingley Model

Red, yellow, and green dots grow and shrink on a graph representing animal life on the African Savannah. The red dots are carnivores, the yellow, omnivores, and the green, herbivores. The graph is an early prototype by Microsoft Research to create a simulation of all life on earth. The hope is to create tool - called the Madingley Model - that will predict how environmental changes will impact the mortality of different animals. So far, Microsoft has working models of the carbon cycle showing animal life on land and in the sea. It is working on another focused on the ocean, particularly plants that are a major food source for fish. “Climate change has many interrelated parts,” said Drew Purves, head scientist for the group handling the project for Microsoft. “We need predictive models of what will happen to the forest and oceans in the future.”

For a data scientist, data.gov is like walking the floors of a library packed with the climate data. Think a live feed of when and where earthquakes happen, fertilizer prices from the 1960s, and time-lapse maps of the Great Lakes shaded blue and green to show their changing temperatures throughout the year. This site is a repository of 400 government data sets from various agencies that researchers can use for free. The information can be quite valuable. In 2006, a small company wanted to build a tool for farmers to see the impact of climate change on crops. “They spent five or six years collecting federal datasets,” said Fabiene Laurier, director of national climate assessment at the White House. “The work was so valuable Monsanto bought them.”

A high resolution satellite photo of an agricultural fire in Sumatra, Indonesia

Animated thin blue lines swirl in eddies and rivulets to show which way the wind is blowing around the globe. Orange dots point out fires in Southeast Asia while a thick haze of red boxes highlight poor air over China. This map is a tool designed by Global Forrest Watch to help track down illegal forest fires. Since the late ‘90s Global Forest Watch has been trying to map the world’s forests and provide up-to-date information on where deforestation occurred. However it would take at least three to five years to publish reports. Last February, Global Forest Watch launched a map that uses satellite data to track forest change. Not only does the map provide information on forest fires around the world, it also tracks the total amount of forest cover on earth. So far nearly half a million people all over the world use the service including the Indonesian government and major corporations like Nestle and Unilever.

True fact: people won’t reduce their energy consumption for public good. But they will do it to keep up with the Jones. Tell people their neighbors are saving energy, and they’ll reduce their consumption, says a study by Dr. Robert Cialdini. Opower has turned this into a business. Opower works with utility companies to analyze data on people’s power usage. Then it sends out personalized reports which let customers know how much energy they use compared to their neighbors. Since it’s inception in 2007, Opower has saved nearly 6 billion kilowatts of energy, enough power to run a city of one million for a year. “Behavior nudging helps reduce user consumption and are friendlier than mandatory blackouts,” said Rick McPhee, head of engineering at Opower.