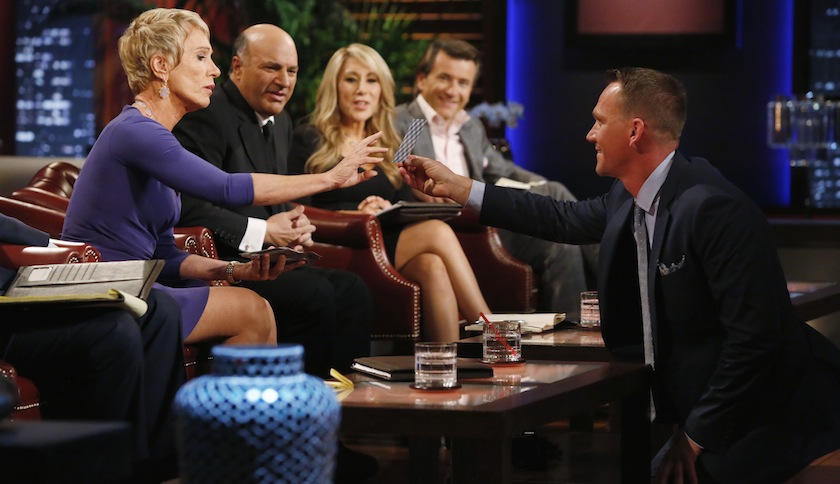 SHARK TANK - "Episode 610" - For the first time in "Shark Tank" history, all six Sharks (Mark Cuban, Barbara Corcoran, Lori Greiner, Robert Herjavec, Daymond John and Kevin O'Leary) appear together in the Tank to discuss their favorite memories of 100 episodes. The Sharks reveal why they participate year after year on the show and what "Shark Tank" means to them. The business moguls top off the segment by celebrating the milestone with a 100th Episode cake and champagne toast, on "Shark Tank" airing FRIDAY, NOVEMBER 14 (9:00-10:01 p.m., ET) on the ABC Television Network. Also in the episode, a mother and son from St. George, UT suggest a healthier way to get things moving along when you do your business in the bathroom; a man from Orlando, FL has an easy-to-use alternative to using plywood for storm protection; a brother and sister from Brooklyn, NY are looking for manufacturing help and distribution outlets for their organic mini-popcorn; and a chef from Portland, OR pitches her dairy-free line of plant-based cheeses. In a follow-up segment, Scotty "Scotty Claus" Martin from Torrance, CA gives an update on Living Xmas, which allows you to rent a live Christmas tree for the holiday season and enjoy it year after year -- a business venture that Mark Cuban invested in during Season Five. (Photo by Kelsey McNeal/ABC via Getty Images)
Photograph by Kelsey McNeal—Getty Images

In the world of startup funding, spotting a winner is no simple task. Much of it comes down to chance. How would the judges of ABC’s Shark Tank respond to pitches from some of the most successful entrepreneurs in recent history when they were just starting out? Here’s how we imagine the conversations might have gone.

Hello Sharks! My name is Steve Ells and I’m the founder and head chef of Chipotle Fresh Mexican Grill. I’m asking for $100,000 for 10% of my company so I can expand. Chipotle serves the best burritos in Colorado, using the freshest ingredients and with an open kitchen for people to see into.

Barbara Corcoran: I’m going to stop you for a second, what do you mean by “fast casual”?

Well, yes, but we may also do tacos at some point.

Barbara Corcoran: So a store serving expensive burritos and tacos at a million dollar valuation? I’m going to have to pass.

My name is Elon Musk and I’m about to revolutionize the auto industry, first in the United States and then all over the world. My Tesla cars will drive entirely powered by batteries, with zero emissions or fossil fuels. I’m seeking $5 billion for 20% of my company.

Daymond John: We already have the Chevy Volt and the Toyota Prius on the road and the audience for this type of car is pretty small, right?

Yes, but my electric car will be different.

It will cost almost $100,000 and there will be no dealerships where you can purchase them.

That’s right. And you’ll need to refuel them at special filling stations that I will also need funds from you to build, all over America.

Kevin O’Leary: But what powers the car?

Well, it’s a special kind of battery that no one really makes a lot of yet. I’m also going to need some cash from you to make those too. But we’re only going to sell around 30,000 cars, tops, during the first few years, so that shouldn’t be a problem.

Daymond John: I feel like you’re playing a joke here.

Good afternoon, Sharks! My name is Travis Kalanick and my new app is going to change the way people get around their cities in over 180 countries around the world. Uber is going to replace half of the taxis and limousine companies in existence overnight.

That’s right. It’s an app on your phone and it lets you order a car service from anywhere you are at any time.

Kevin O’Leary: How will you get all the cars and drivers to work for you?

That’s the beauty of it. They won’t work for us. They’ll work for themselves and split the revenues. We’re even going to let random drivers who aren’t professionals operate on our platform!

Barbara Corcoran: Let me see if I understand this. Taxi and limo drivers are going to agree to work for you but not really be considered as working for you? And you think people are going to want to get picked up by unlicensed strangers?

Daymond John: So what you’re saying is you invented a hitchhiking app?

Well, that’s not how I would put it exactly...

Barbara Corcoran: So you’ll be competing with every transportation company in the world?

Yes. And we’ll also be having knock-down, drag-out fights with politicians and lobbying groups  in almost every state and city, not to mention the fact that we’ll be responsible for the safety of millions of drivers and passengers everywhere we go.

Kevin O’Leary: What did you say your valuation would be?

We think we’ll be worth $40 billion within our first 36 months.

Portrait of Jeff Bezos, founder and CEO of internet based company Amazon.com

I’d like to introduce you to Amazon.com, which I think will be the largest retailer in the world. My name is Jeff Bezos and I’m asking the Sharks to back my company with $500,000 for a 5% stake.

There aren’t any. I would prefer to talk about revenue.

Right, well that’s what I’m going to do. We’ll sell billions of dollars worth of merchandise every month. Profits will come later.

Barbara Corcoran: When is later?

We’ll still be generating losses 18 years down the road. But we’ll be sure to add new services along the way that people will be excited about.

Mark Cuban: But aren’t you worried about running out of money?

No. Investors will keep giving us money because we’ll keep growing and showing increased sales. Other retailers we compete with who have to actually earn profits will go out of business and we’ll keep getting bigger.

Lori Greiner: Jeff, I actually think you’ve just discovered the holy grail of capitalism. Why hasn’t anyone else ever done this?

Because this is an Internet company, and the rules are different. The standards by which other businesses are judged won’t apply to me.

Mark Cuban: Actually, I kind of think this could work.

Did I mention drones?

Daymond John: I need to see some proof that an eternal funding machine like this can last as long as you think it could. So for that reason, I’m out.

Hello Sharks. My name is Marcus Goldman and this is my son-in-law, Samuel Sachs. We’ve launched an investment bank on Wall Street that will cater to large corporations, heads of state, and even royalty as we help people turn their piles of money into even more money.

We’re convinced that with a small amount of startup capital, we’ll be on our way toward world domination in no time.

Mark Cuban: I’m intrigued, but aren’t there lots of other investment banks on Wall Street? How can you be sure that yours will survive and thrive?

That’s a great question, Mark, and we’re glad you asked it. We’re only going to hire the very best and brightest. The smartest, most driven and determined bankers, analysts, and traders coming out of the top institutions of learning. They’ll close major deals and bring in windfalls of cash for the firm. We’ll make the most indispensable among them partners and pay incredible salaries to keep them.

Robert Herjavec: That sounds good on paper, but...

You didn’t hear the best part. Many of them will leave the firm over the coming decades and become instrumental members of the Federal Reserve, the Treasury Department, and even end up advising presidents in the White House as well as governments in Europe, Asia, and Latin America. We’ll have a network of influential government officials and bankers the likes of which the world has never seen.

We’ll serve counterparties on both sides of every transaction and have an angle that allows us to win regardless of any potential outcome. In short, we’ll be in the room for every major financial and economic decision undertaken anywhere there is money on the line.