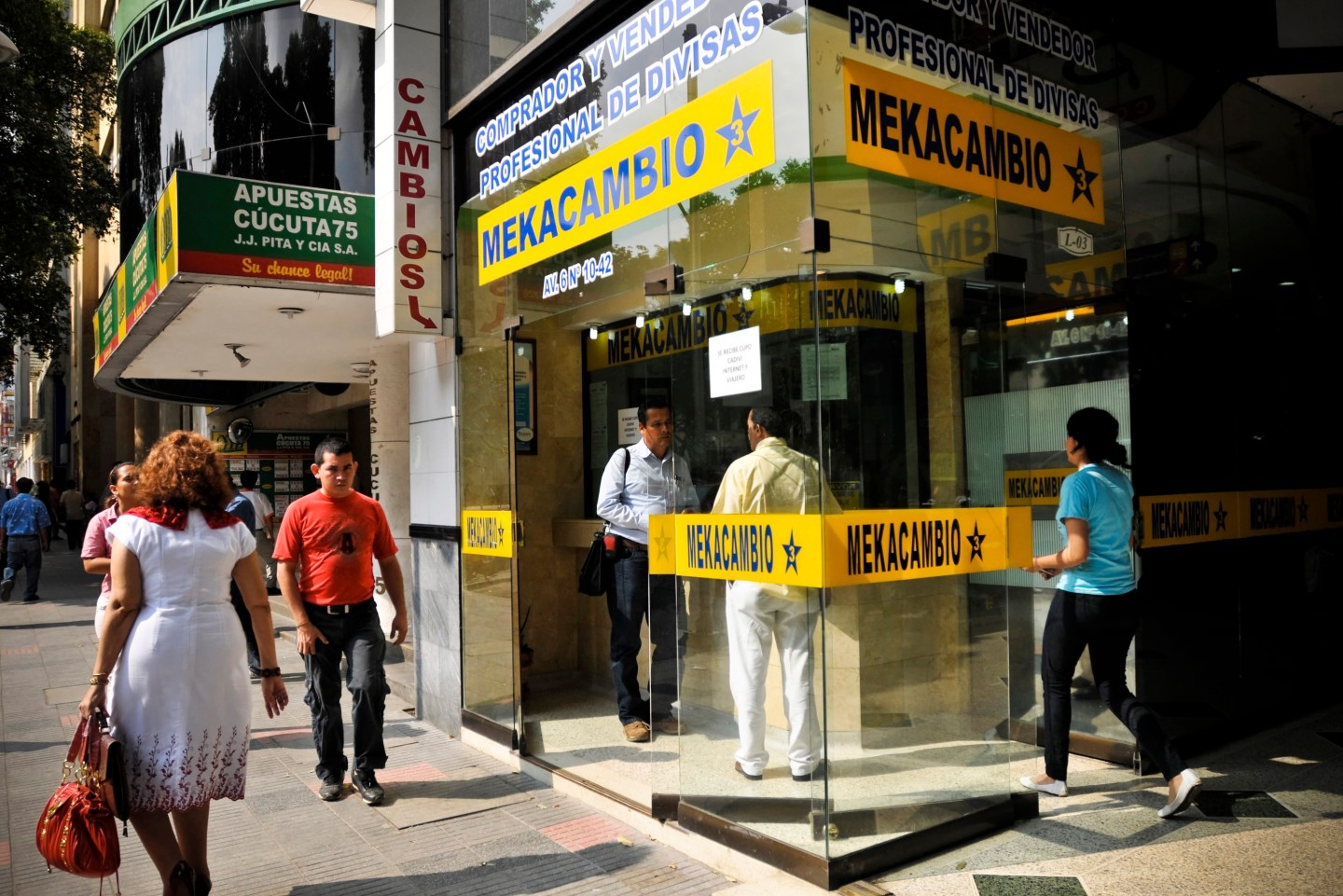 Customers trade Colombian pesos and Venezuelan bolivars at Mekacambio, a currency exchange house, in Cucuta, Colombia, on Monday, March 14, 2011. Long trips to the border to swap an increasingly devalued bolivar for U.S. dollars or pesos shows the desperate measures that Venezuelans are taking to obtain foreign currency after President Hugo Chavez imposed controls in 2003. The government shut an unregulated market that operated as an escape valve last year and companies wait for dollar bond sales to be able to repatriate earnings. Photographer: Meridith Kohut/Bloomberg via Getty Images
Photograph by Meridith Kohut — Bloomberg via Getty Images

In Venezuela, a 36-pack of Trojan condoms now costs $755 at the official exchange rate. That’s the price being asked on the MercadoLibre website, where Venezuelans go to buy goods in short supply.

The huge markup is due to the collapse in oil prices, which has had disastrous consequences in Venezuela, Bloomberg reports.

The South American country relies on crude-oil exports for 95% of its foreign-currency earnings and has seen a 60% fall in those exports over the past seven months.

As a result of the government’s policy of slashing imports to make up for the deficit, consumer goods have become scarce and expensive, and people are forced to queue for hours to get basic products such as meat, sugar, medicine and now contraceptives.

For those with access to American dollars, condoms can be bought on the black market for around $25. But this is only the lucky few.

Bloomberg reported last year that Venezuela’s prostitutes more than double their earnings by moonlighting as currency traders in ports like Puerto Cabello. They are the foreign exchange counter for sailors in a country where buying and selling dollars in the streets is a crime–and prostitution isn’t.

But the lack of access to contraceptives threatens a much broader section of society, and could deepen the country’s social problems. Venezuela has one of South America’s highest rates of HIV infection and teenage pregnancy. Because abortion is illegal, the disappearance of condoms and other forms of birth control like the pill may force more women to clandestine abortion clinics, increasing the risk of maternal deaths.