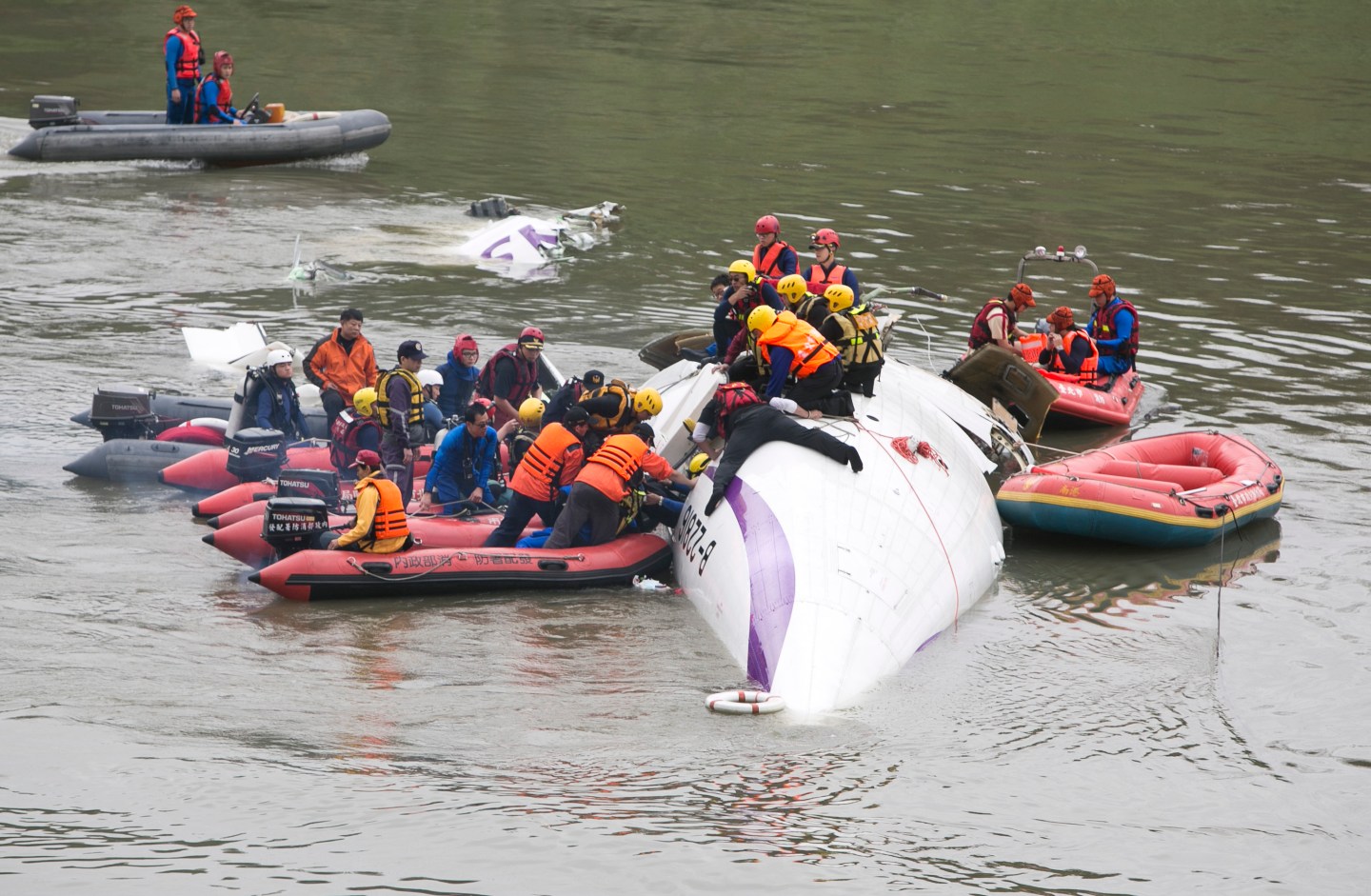 TAIPEI, TAIWAN - FEBRUARY 04: The rescue crew pulls out a passenger from a TransAsia Airways ATR 72-600 turboprop airplane that crashed into the Keelung River shortly after takeoff from Taipei Songshan airport on February 4, 2015 in Taipei, Taiwan. Over 50 people were onboard the aircraft when it clipped a bridge and crashed into the river. Twelve deaths have currently been reported. (Photo by Ashley Pon/Getty Images)
Photograph by Ashley Pon — Getty Images

The TransAsia Airways flight carrying 58 people that crashed into a river near Taiwan’s capital on Wednesday was captured in frightening footage instantly passed around the world.

Questions instantly arose about the safety record of Taiwan’s third-largest carrier, as today’s accident marks the airline’s second fatal crash in seven months. The company’s shares fell nearly 7% in response to the news, although they’re still 20% above the level they hit after the last crash.

As of Wednesday night, Taiwanese authorities said at least 19 people had died when the ATR 72-600 turboprop made by France-based ATR crashed into a river. In a July TransAsia crash, 48 people died and 10 more on board were injured when another ATR 72 barreled into a residential area after an attempted landing on Taiwan’s Penghu Island.

The latest downing of a plane, coupled with the frightening footage, should drive Taiwanese regulators to scrutinize the airline’s safety procedures because it doesn’t appear the ATR turboprop’s safety records differ substantially from its competitors’.

According to statistics compiled by Airsafe.com, the ATR 42 and ATR 72 crash rates of about 0.69 times per one million flights don’t fall far outside the ranges of airplane models from Boeing and Embraer. ATR says its regional plane is so popular—it has sold it to 180 operators in 90 countries—that one takes off somewhere in the world every 15 seconds.

Last year the rate of airplane accidents was the lowest recorded total since 1973, according to the Bureau of Aircraft Accident Archives (BAAA), even though the casualty total was higher than the previous nine years because of large fatalities in the Air Asia plane downed en route to Singapore, and Malaysia Airlines losing two Boeing 777s–one apparently shot down over Ukraine and one in still-unclear circumstances.

TransAsia is the third largest airline in Taiwan, competing against rivals China Airlines and EVA Airways, and received approval in 2013 to launch a low-cost airline in market.

Before the airlines crash last year, Taiwan’s last recorded fatal incident happened in 2002 when a Boeing 747 broke apart in mid-air and killed all 225 people on board, according to BAAA.

TransAsia, which was listed on the Taiwan stock exchange in November 2011, remains a much smaller player than rivals China Airlines and EVA Air.

The airline, which also has Airbus A320s and A330s, mainly operates services from Taiwan to other Northeast Asian destinations in China and Japan. It also has services to South Korea, Macau, Thailand and Cambodia.

Its ambitious management has, in the past, expressed hopes of eventually becoming a larger carrier with services to Europe or the U.S. using aircraft such as the Airbus A380, according to Reuters.