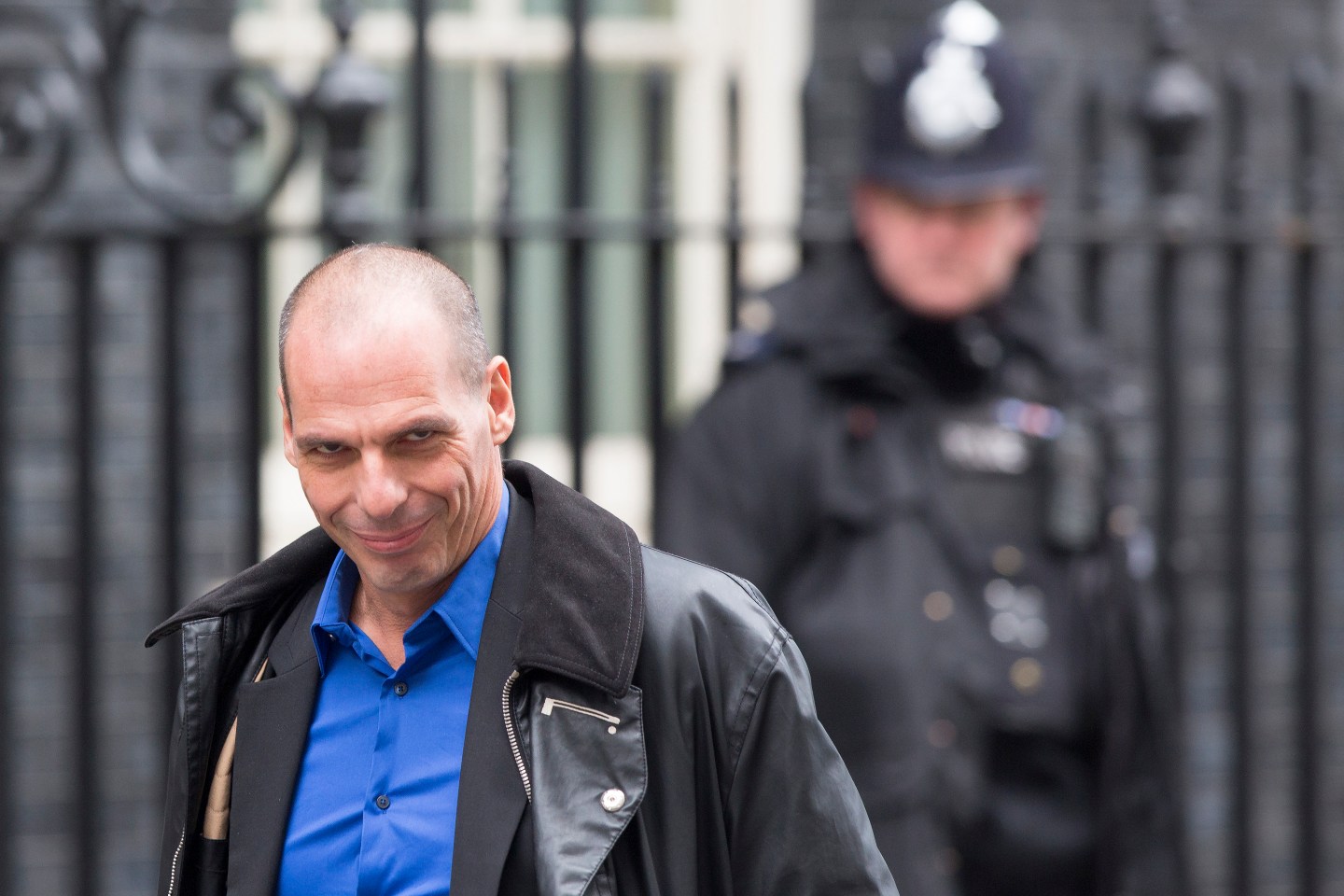 Confidence is flooding back to Greece’s financial markets after the new left-wing government abruptly dropped its call for a partial write-off of its debts, played down suggestions that it would impose fresh losses on private bondholders and set out its ideas on how to keep the country in Eurozone.

Finance Minister Yanis Varoufakis told the Financial Times that the government would no longer ask for half of Greece’s €315 billion to be written off, but would rather seek to replace existing loans with a “menu of debt swaps.”

The Athens stockmarket was up 8.3% by mid-morning, and the yield on its three-year bonds had fallen from over 20% to 17.66% as the prospect of a default and an exit from the Eurozone receded.

But it’s probably too early to hang out the flags. There’s a lot in the Greek proposals that Germany won’t like, and which the European Central Bank in particular will loathe. And there is nothing about the government’s commitment to reforming the economy, which is far more important to ensuring a future in the Eurozone than any tweaks of the debt burden.

Varoufakis said the bulk of the country’s official debts should be transformed into bonds linked to nominal GDP growth, ensuring that the country only pays back when it can afford to.

In addition, he said that Greek government bonds currently held by the European Central Bank should be replaced by “perpetual bonds”, removing the need for big redemption payments over the next couple of years, freeing up more government resources.

“There will be a deal within a very short time that makes it perfectly clear to everyone that Greece can play within the rules, and in a way that will put away the crisis once and for all,” Varoufakis told the U.K.’s Channel 4 news late Monday.

The proposals do put Greece back on the right side of the red line drawn by Germany and other Eurozone creditors, who have refused point blank to accept any “haircut” on their claims.

But they ask impossible concessions from the ECB. First, it’s hard to see Frankfurt agreeing to hold Greek bonds forever in return for what is likely to be a minimal interest payment. The Greeks can argue that the ECB has already effectively suspended the law on it not lending to governments with its new quantitative easing program, but the Greek plan would expand and set in stone forever emergency privileges that Greece has enjoyed at the ECB for the last three years.

The ECB still holds around €25 billion worth of Greek debt, people familiar with the situation say. It has another €120 billion or so in bonds from Italy, Spain, Ireland and Portugal, who would also love to be spared ever repaying them. The ECB also lends about €50 billion to Greek banks through its regular operations, despite the fact that those banks have virtually no investment-grade collateral to offer.

But Athens wants more. The newspaper Kathimerini reported that Varoufakis wants to increase the government’s borrowing through short-term Treasury bills (capped by the bailout agreement to €15 billion) to €25 billion. As these bills are routinely bought by Greek banks and immediately deposited at the ECB as collateral for more loans, it’s to all practical purposes direct funding of the government’s deficit by the ECB.

And just in case there was any doubt as to how the Syriza party really sees the role of the Frankfurt-based central bank, Giorgios Katrougalos, vice minister of the interior, told the German newspaper Bild-Zeitung that “The ECB should initiate the redistribution (of wealth) and start printing money.”

So far, there is no sign that the proposals will get any traction. The only movement visible among the creditors is a report that European Commission President Jean-Claude Juncker is preparing a new format for engaging with Athens, abolishing the monitoring missions by the hated “Troika”.

Those regular visits have symbolized Greece’s humiliation of his country at the creditors’ hands, but Prime Minister Alexis Tsipras is going to need more than just cosmetic adjustments to keep his credibility at home. A proper resolution is still some way off.