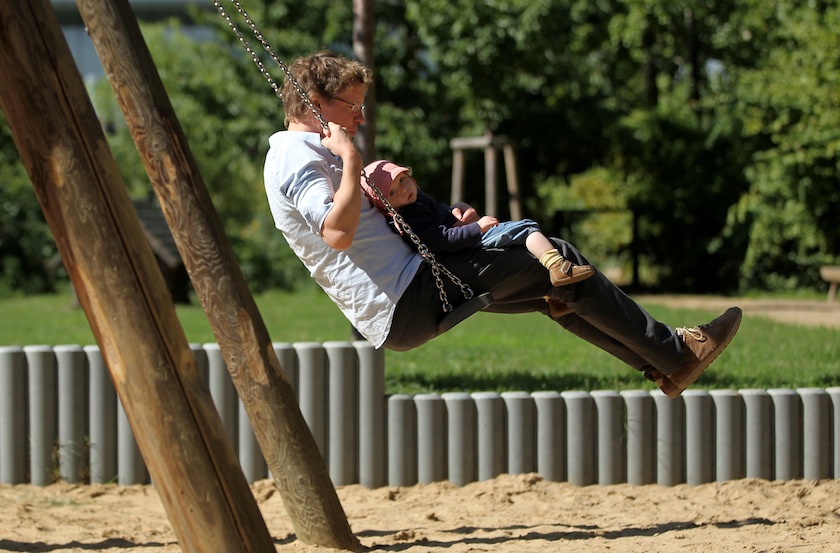 The debate over our country’s lack of a paid maternity leave policy has taken center stage. Last week during his State of the Union address, President Obama vowed to make it (and other forms of paid leave) a priority of the last two years of his presidency. Many people have, rightly, rallied around the idea.

It’s no secret that women make, on average, less than men. One of the biggest reasons behind the gap is the different choices men and women tend to make regarding their personal lives. Whether at the blue collar or the executive level, when women make the choice to have children, statistics show that it often negatively impacts their career paths and their earning abilities.

For women to achieve more in the workplace, mothers need more flexible schedules and to be able to leave the workforce and come back without being punished.

But to even the playing field—and reduce the weight women bear when it comes to balancing children and work—freeing up working dads also has to be part of the fix.

According to one study cited in an eye-opening piece by the New York Times’ Claire Cain Miller last year, a mother’s future earnings increased an average of 7% for every month of leave the father took.

Yet the article also reported that paternity leave at U.S. companies is on the decline, with the share of companies offering it dropping by 5 percentage points from 2010 to 2014. And while 89% of all fathers took some time off after their children’s births, most of them took a week or less.

What gives? Some of the decline can be blamed on a powerful stigma that persists surrounding fathers who take time off. Cain Miller wrote about a San Francisco lawyer whose firm offered four weeks of paid leave to fathers—but when he took it, his partners questioned his commitment.

Even in Scandanavian countries—paternity leave pioneers that mandated employer policies as early as the 1970s—the Times and others point out that it took a while for men in these countries to actually take it, and in many cases, they did so only after the government added incentives (like the families would lose the leave if the men didn’t take it).

New American Foundation president and CEO Anne-Marie Slaughter thinks lessening this stigma is key to achieving, or even coming close to, full equality in the workplace. She talks of the need to “re-socialize men” and shift the perception of caregiving so that it’s as valued as climbing up the corporate ladder. We need to “make caregiving cool for guys,” she says.

Slaughter thinks policy can help here: Offerings like universal childcare and flexible parental leave for both parents will go a long way, she says. Workplaces can help, too, she says, by creating corporate cultures that are more flexible and value caregiving.

Workplaces cultures indeed make a huge difference. Consider the experience of my colleague, a man in his early 40s with two young kids. He worked at a different media company at the time, but in both cases, the births of his children were celebrated in the office. When his son was born, his department threw him a “shower” in the office, presented him with a Bugaboo stroller, and his boss gave him a gift certificate for food delivery for two weeks while he and his wife adjusted to being new parents. By the time his daughter was born, he’d moved to a new division within the company. There, too, his colleagues feted him before his daughter’s birth and his boss, the CMO of the division, was wholly supportive of the two weeks he took off. He checked in when he could during that time, he says, but “everybody understood.”

Both times, his bosses were women. The CMO had two kids. The executive who gave him the Bugaboo stroller and the food delivery? She had five.

We may be a long way from in-office showers and Bugaboos for everyone, but there’s a lot of momentum behind increasing paternity leave policies: in addition to the President Obama’s plan, Kirsten Gillibrand introduced legislation in 2013 to require that employers offer new parents three months of partially paid leave. California’s 2004 paid parental leave law, followed by New Jersey and Rhode Island, is open to both mothers and fathers.

By far the best example of this is in Silicon Valley, where workplace benefits are younger and more progressive. Google gives 12 weeks of paid paternity leave. Facebook and Reddit give 17. Change.org recently retooled its policy to give 18 weeks of paid parental leave to any employee who becomes a new parent—mother or father, biological or not. And at these companies, men are more than okay with it; it’s “cool” to take it.

One clear path to more equality in the workforce and more women in leadership roles is having fathers share in early childcare duties. More generous policies are part of this. So is getting rid of the stigma, one Bugaboo at a time.