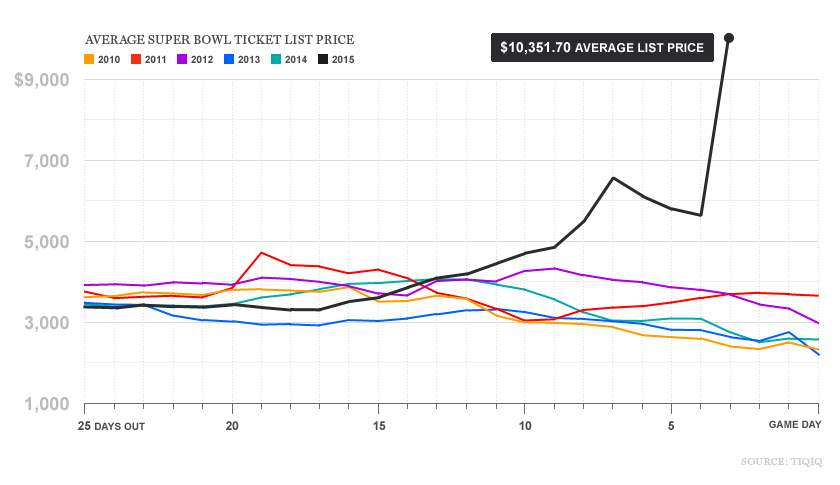 With the Super Bowl in Arizona this weekend just hours away, something strange is happening with ticket prices: They’re far higher than they’ve been in the past five years.

TiqIQ, a ticket broker that crunched the numbers since 2010, found that the average list price as of Friday morning was $10,352, or more than three times last year’s average of $2,754.

The reason: Many brokers sold tickets that don’t have, a common practice in the business, said Chris Matcovich, vice president of data & communications for TiqIQ. Their thinking was that they could find cheaper tickets on the resale market and turn a profit. But demand is high this year. As result, the last minute scrambling is sending prices soaring.

Matcovich called it an example of greedy brokers getting their hands “caught in the cookie jar.”

Other factors contributing to the skyrocketing price of a ticket include that the teams playing – the Seattle Seahawks and New England Patriots – have particularly loyal fans. There’s also the fact that both teams have loyal fans among the snowbirds who winter in Arizona to escape the chill. Then, of course, there’s a lot that can be chalked up to an ever-improving economy and more people being flush with cash.

In the end, soaring prices will likely mean some people who bought tickets from brokers – or at least thought they did – will never get what they paid for.

Football fans who bought tickets directly from the NFL for face value paid anywhere from $800 to $1,900. The NFL allots each participating Super Bowl team 17.5% of the total inventory, which is then raffled among the season ticket holders. The host team – the Arizona Cardinals, in this case – receives 5%. Another 34.8% of the tickets are spread among the other NFL teams while 25.2% goes to the NFL for sponsors and comp tickets.

Cross-checking TiqIQ’s prices with other resale ticket companies illustrate the booming prices this year. For instance, a Stubhub search shows the least expensive ticket is going for $8,049. The highest price? Over $65,000.