Does it cost more to keep unauthorized immigrants in the U.S. — or deport them? 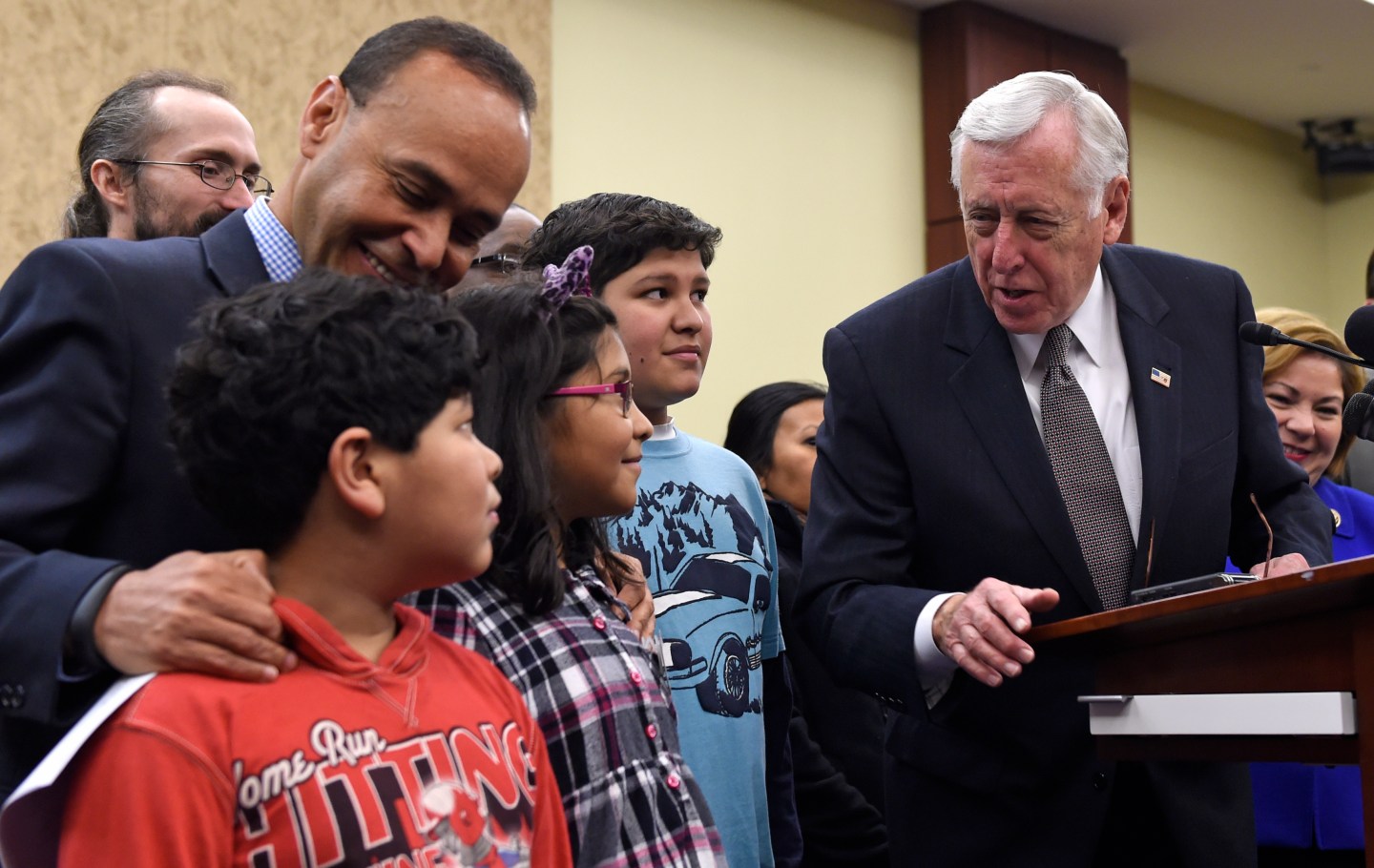 With the new GOP-controlled Congress in session, the battle over immigration is once again in the spotlight.

Earlier this month, the House passed a bill along party lines that would de-fund the president’s recent executive actions to delay deportation of up to five million undocumented workers and grant them work permits.

The measure also blocks a 2012 order from the president that protected immigrants brought to the United States illegally as children — and it attempts to reverse a series of White House memos that said terrorists and criminals should be deported first.

Why? In order to emphasize Republican efforts to focus on border security as the spear point for immigration reform rather than a path to citizenship — efforts Obama says he will veto.

“We know that unemployment is higher than reported and that wages are lower partly due to illegal immigration” said Ira Mehlman, media director for the Federation for American Immigration Reform, a group that opposes the executive orders.

“Our view is that immigration reform should have better enforcement at our borders and limited immigration at non-discriminatory levels,” Mehlman said.

But that kind of thinking is short-sighted, said Ediberto Román, a professor of law at Florida International University.

“Conservative pundits all too often sound alarms over an effort to take over America and of undocumented immigration’s alleged horrific impact on the U.S. economy,” said Román, who authored a book released last year on immigration. He said these claims have no evidence to support them.

Here, then, are the pros and cons of immigration reform by the numbers.

Arguments for a path to citizenship:

On its website, the White House says that by 2023, the U. S. economy will lose some $80 billion in economic output by not allowing a path to citizenship for the estimated 11 million undocumented workers.

The country will also have $40 billion in higher deficits in the next 10 years. And during that same decade, the Social Security Trust Fund will lose out on some $50 billion.

“The president’s executive order is an overdue acknowledgment of the facts on the ground,” said Joseph Lake, a U.S. analyst for research group the Economist Intelligence Unit. “Most undocumented immigrants are woven into the fabric of American life in a way that will be impossible to unwind,” Lake said.

According to a 2013 study by the social action group Center for American Progress, if the undocumented immigrants currently living in the United States were provided legal status, the 10-year cumulative increase in the gross domestic product (GDP) would be $832 billion.

Meanwhile, the cumulative increase in the personal income of all Americans over 10 years would be $470 billion, according to the report.

A 2014 study by the Center for Immigration Studies (CIS), a group that promotes tougher immigration laws, concluded that in New Hampshire the vast majority of job creation went to immigrants and not to native residents.

And according to a 2011 report by FAIR, undocumented immigrants cost U.S. and state governments $113 billion a year in welfare programs. The report argues that immigrants use more welfare programs than people born in the United States.

“The more illegal aliens we have taking advantage of welfare funding, the more strain there is on our economy,” said Ron Washburn, a professor of legal studies at Bryant University.

Reform is needed, said Villanova School of Business Economist David Fiorenza, if only to keep state budgets out of the red if the economy hits another rough patch.

“Places such as California are, or will see, more pressure on their budgets to provide services to undocumented immigration,” Fiorenza said.

FAIR’s Mehlman also said that undocumented workers are helping to keep overall wages down because they continue to work at much cheaper levels than a native-born citizens.

FAIR also points to rises in crime from undocumented workers as an economic and societal threat.

That drew a strong response from FIU’s Román.

“There is simply no basis to conclude that immigrants are more likely to foster a terrorist or criminal element than the native population,” he said. “These claims are made with little or no evidentiary support, yet they have captured the public imagination.”

Another set of numbers fueling the immigration debate, say experts, is the shortage of workers in the United States.

“Where I get concerned in the longer run is that the nation is becoming more reliant on immigration versus the natural population growth to supply labor,” said Scott Clemons, Chief Investment Strategist at Brown Brothers Harriman.

“We are borrowing labor force from other countries,” Clemons said.

Officials from high tech industries say the United States does not allow enough legal immigrants in with H-1B visas.

“We continue to notice one thing over and over again with the customers we see that really highlights a big issue around the immigration reform topic,” said Matt Faustman, CEO of UpCounsel, which provides legal services for businesses.

“Everyone, big and small companies, is looking for foreign talent,” he added.

The scarcity of labor also dominates industries that rely on less-skilled workers. Farmers in states like California have complained they don’t have enough labor to pick fruits and vegetables, while crop pickers fight for issues like overtime pay and health care.

“If we want farm workers here we need to organize them in a better way,” said Fariborz Ghadar, founding director for the global business studies at the Smeal School of Business at Penn State University. “They do pay taxes and contribute to the economy but don’t always get the benefits,” he said.

FAIR and CIS call for stricter border controls before anything else is done.

Business organizations like the Chamber of Commerce have called for immigration reform, saying immigrants are good for the economy while advocating a tough but “fair process for undocumented people who are living in our country today to earn a legal status.”

Experts remain cautiously optimistic some sort of reform will get done.

“We need more clarity on immigration policies,” said Brown Brothers Harriman’s Clemons. “Democrats and Republicans would agree the immigration process at present is muddy and unacceptable,” he said.

One figure that should focus politicians and lobbyists as they battle it out over immigration reform: experts say that expelling immigrants could cost an estimated $8,318 to deport each of the 11 million undocumented people now in the United States.