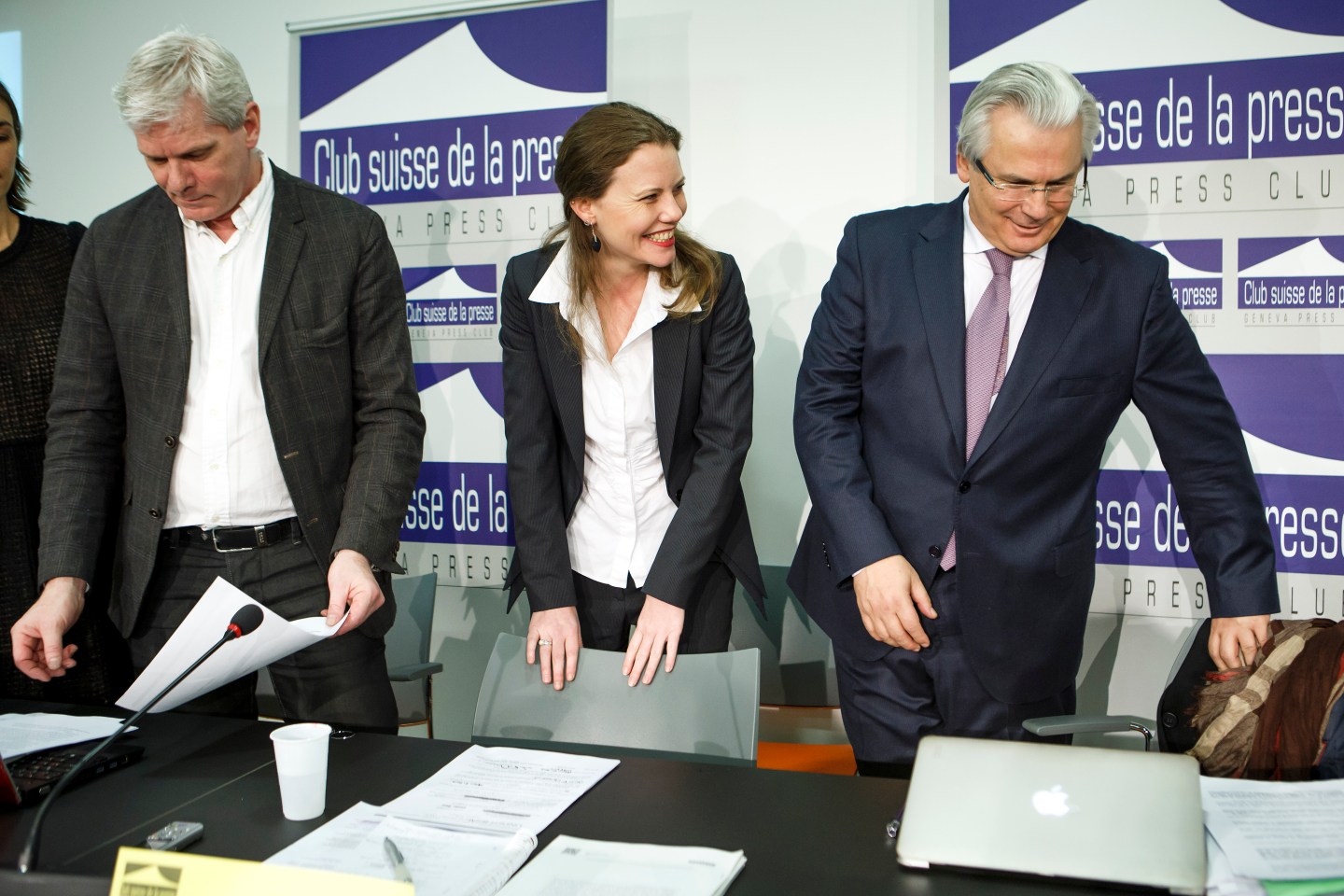 Kristinn Hrafnsson, left, spokesman for the WikiLeaks organization, Sarah Harrison, center, journalist with WikiLeaks, and former Spanish judge, Baltasar Garzon., right, Director of WikiLeaks founder Julian Assange's defence team, arrive for a press conference, at the Press Club, in Geneva, Switzerland, Monday, Jan. 26, 2015. The secrets-spilling group WikiLeaks has criticized Google for failing to inform it about U.S. search warrants issued against three of its staff. The warrants issued in March 2012 required Google to hand over the phone numbers, IP addresses, credit card details, contents of all emails and other information for Sarah Harrison, Kristinn Hrafnsson and Joseph Faerrell. They were disclosed to WikiLeaks in December. Google didn't immediately respond to requests for comment. (AP Photo/Keystone,Salvatore Di Nolfi)
Photograph by Salvatore Di Nolfi — AP

(REUTERS) – WikiLeaks criticized Google Inc on Monday, alleging that the company waited 2-1/2 years to notify members of the anti-secrecy group that it had turned over their private emails and other information to the U.S. government.

In a letter to Google, lawyers representing WikiLeaks said they were “astonished and disturbed” by Google’s actions relating to search warrants it received from federal law enforcement officials and asked for a full accounting of the information Google gave the government.

The revelation follows leaks by former National Security Agency contractor Edward Snowden detailing controversial U.S. government surveillance practices and assurances from technology firms like Google that they would do their utmost to safeguard users’ personal information.

“While it is too late for our clients to have the notice they should have had, they are still entitled to a list of Google’s disclosures to the government and an explanation why Google waited more than two and a half years to provide any notice,” read the letter from the Center for Constitutional Rights on behalf of WikiLeaks and addressed to Google Executive Chairman Eric Schmidt and General Counsel Kent Walker.

WikiLeaks, founded by Julian Assange, landed in the public spotlight in 2010 when it published a trove of classified government information, including leaked U.S. diplomatic cables.

Google, whose online services include the world’s No.1 Internet search engine as well as the popular Web email service Gmail, notified three members of WikiLeaks on December 23, 2014 that it had provided “all of their email content, subscriber information, metadata and other content” to law enforcement officials more than two years earlier, according to the letter.

Google provided the information in response to warrants for an investigation concerning espionage, conspiracy to commit espionage and the theft or conversion of property belonging to the U.S. government, among other items, the letter said.

Google said in a statement on Monday that it has a policy of informing users about government requests “except in limited cases, like when we are gagged by a court order, which sadly happens quite frequently.”

Google (GOOG) noted that it has pushed to unseal all the documents related to the investigation.

WikiLeak’s letter drew a comparison to social media service Twitter Inc, which it praised for fighting the government in order to notify subscribers about such court orders.