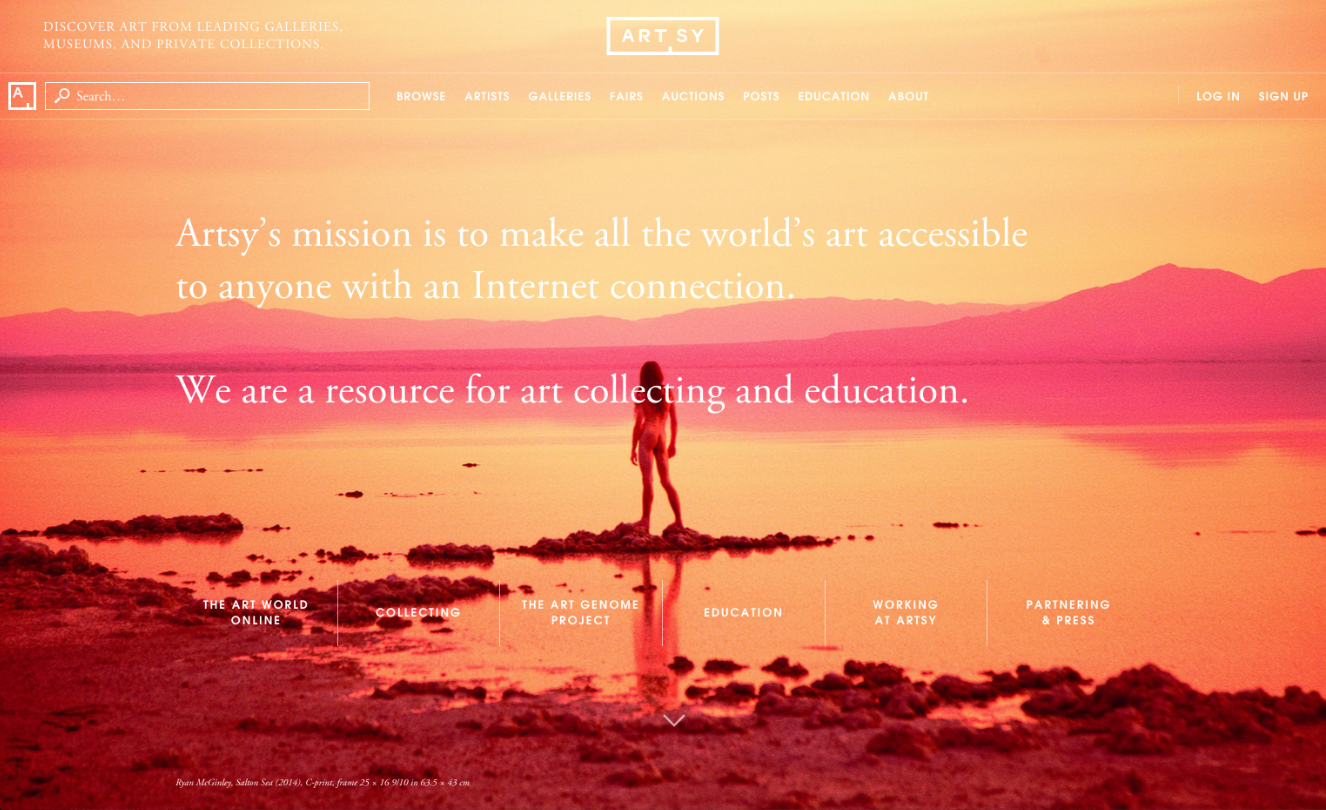 The art industry is an old-school, relationship-driven one, and it won’t be easily turned on its head by software from outsiders. To make its bid for attention work, Artsy, a resource for art collectors and galleries, is practicing another fine art: patience. For the past five years, the New York company has been carefully working itself into the insular art world. If it succeeds, it will be positioned as a crucial middleman in a $66 billion industry. If not, well, someone else will.

To do that, Artsy has built up a public database of 230,000 images of art, raised $25.9 million in venture funding, and expanded its team to 90 employees. More importantly, it has won over many galleries and art collectors.

On Thursday, the company revealed some of its progress. Since opening its online platform to galleries in 2012, more than 2,500 of them have published artworks on Artsy. So have 400 museums and foundations, including the Guggenheim and the New Museum. The company has a long way to go before it reaches ubiquity—there are about 150,000 galleries in the world. Still, the Artsy app has been downloaded by collectors 300,000 times. Last year, potential buyers inquired on $5.5 billion worth of art using Artsy—four times as much as the year prior. The company doesn’t track how many of those inquiries result in purchases.

Commerce is what will make Artsy into a thriving business, but it’s also the company’s biggest challenge. Artsy currently makes money two ways. First, it charges the galleries a monthly subscription fee to access to the platform. (Thirty-seven art fairs were on Artsy in 2014, including Art Basel, the Armory Show, and Frieze. Art Basel does not pay Artsy, the company clarified.) Second, it takes a small commission on benefit auctions, such as the Whitney Art Party and Brooklyn Museum Artists Ball.

Both of the fees Artsy charges are quite low. The galleries pay between $375 and $1,400 per month for the software. Artsy CEO Carter Cleveland says the business model is intentionally designed that way.

“We’re consciously leaving a lot of money on the table,” he says. “It’s likely those galleries would pay more. We have a history of undercharging for things, and once we are proving a certain amount of value, we can start to charge more.”

Other companies, such as Saatchi Art, are taking on the art world with a more combative approach with hopes that artists will eventually circumvent galleries altogether and sell their art directly to collectors. But it remains to be seen whether the art world wants to be democratized in that way. Artsy is taking a more collaborative approach that includes a lot of hand-holding.

“Part of the role we need to play is not just efficiently connecting buyers and sellers, but also educating galleries about the best way to take advantage of the Internet,” Cleveland says, acknowledging the size of the challenge. “Some galleries have a more natural talent for this, but others are really struggling.”

This article has been updated to show that the fee Artsy charges galleries is monthly, not yearly, and that Art Basel does not pay Artsy. The article was updated a second time to show that no art fairs pay Artsy.