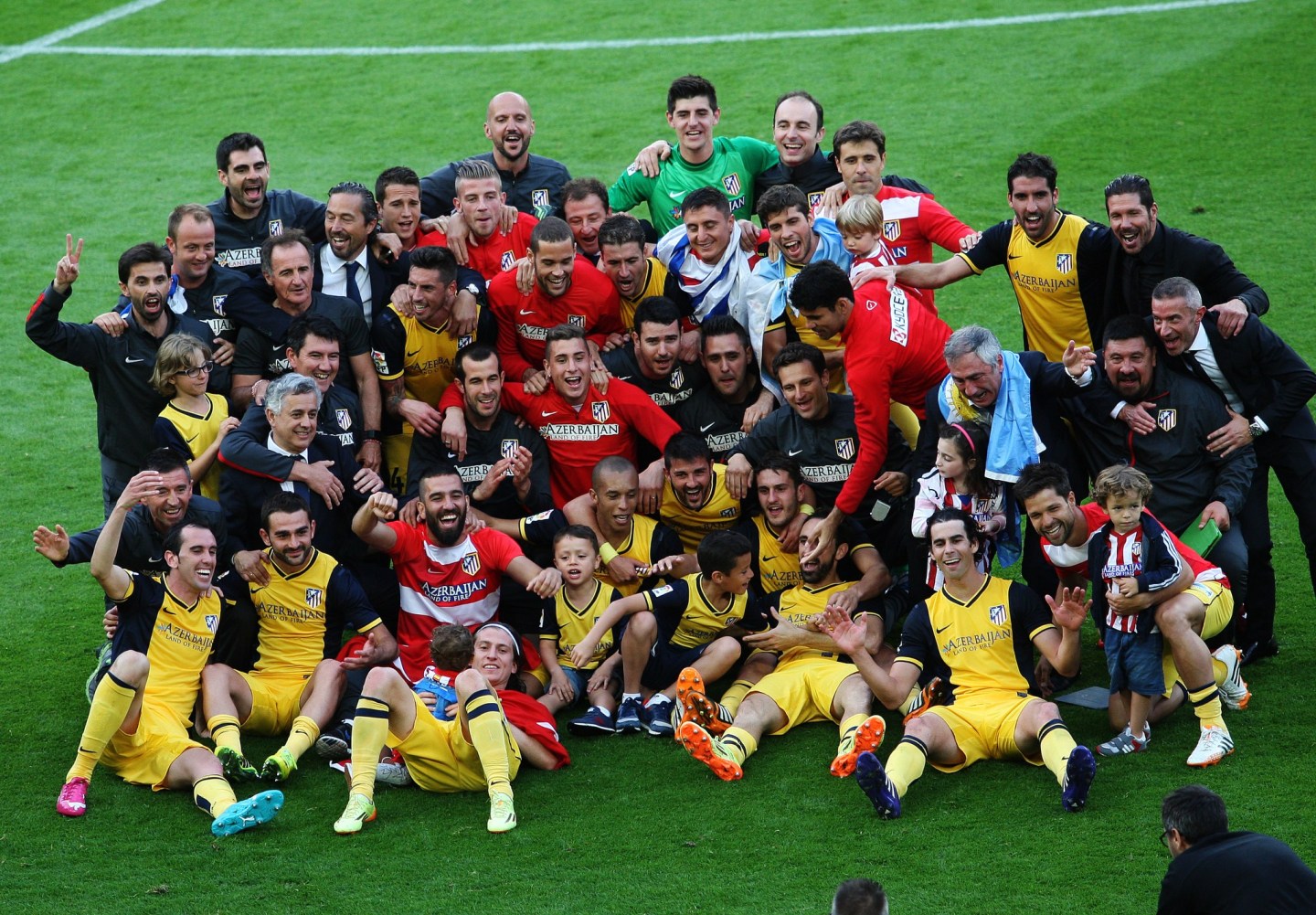 Atletico de Madrid's football players and staff pose as they celebrate their Spanish league title at the end of the Spanish league football match FC Barcelona vs Club Atletico de Madrid at the Camp Nou stadium in Barcelona on May 17, 2014. Atletico Madrid claimed their 10th Spanish league crown today but first in 18 years after coming from behind to draw 1-1 away at title rivals Barcelona. AFP PHOTO/ QUIQUE GARCIA (Photo credit should read QUIQUE GARCIA/AFP/Getty Images)
Photograph by Quique Garcia — AFP/Getty Images

One of China’s biggest property and entertainment groups is to invest €45 million ($52 million) in Spanish soccer club Atletico de Madrid, a move that signals the arrival of a new force in European soccer in more than one respect.

The investment by Wanda Group, owned by Wang Jianlin, is the first big move into top-tier European soccer by China’s mega-rich, who have been slow to join the U.S., Russian and Arab investors that have thronged to the English Premiership in particular in recent years. Forbes estimates Wang is China’s second-richest man with personal wealth of over $18 billion.

It may also signal the first real threat in years to Spain’s traditional soccer duopoly of Real Madrid and FC Barcelona, as Wang’s money will help the club cement its recent success on the field.

Despite working on budget less than a third of Real’s, Atletico won the Spanish championship, or ‘La Liga’ for the first time since 1996 last season, and also came within minutes of winning the UEFA Champions League, before losing to their cross-town rivals.

It was the first time in 10 years that La Liga hadn’t been won by one of Spain’s two blue-bloods, whose revenues have traditionally dwarfed those of all other clubs in Spain.

But the financial gulf between Atletico and Europe’s richest clubs was underlined when it sold its star striker, Diego Costa, to London’s Chelsea F.C. in the summer for some €40 million. Unconfirmed reports suggest that the club only received a third of that because the majority of Costa’s economic rights were held by outside ‘investors’.

Wanda will get a 20% stake in return for its €45 million, and said it will invest another €20 million a year by 2017 as part of what it styled as a project to encourage grass-roots soccer in China.

There were no details as to how much of Wang’s money will flow into Atletico’s transfer budget, but Wanda said it a statement that it will “invite” the club every year for promotional tours in China, which will doubtless help its merchandise and sponsorship revenue.

What is clear, is the degree to which Wang’s Wanda is branching out from its traditional business as a Chinese real estate developer (the group’s property arm listed in Hong Kong last year, raising $3.7 billion in one of 2014’s biggest initial public offerings).

In recent years, Wanda Group has not only started getting involved in real estate projects outside China (it bought the Madrid landmark Edificio España tower last year for €265 million and has a long list of other projects in Spain). It has also expanded into the broader world of leisure and entertainment, buying theater chain AMC and U.K.-based yacht-maker Sunseeker.