The Ferrari FF: A sports car that can kick snow and ice 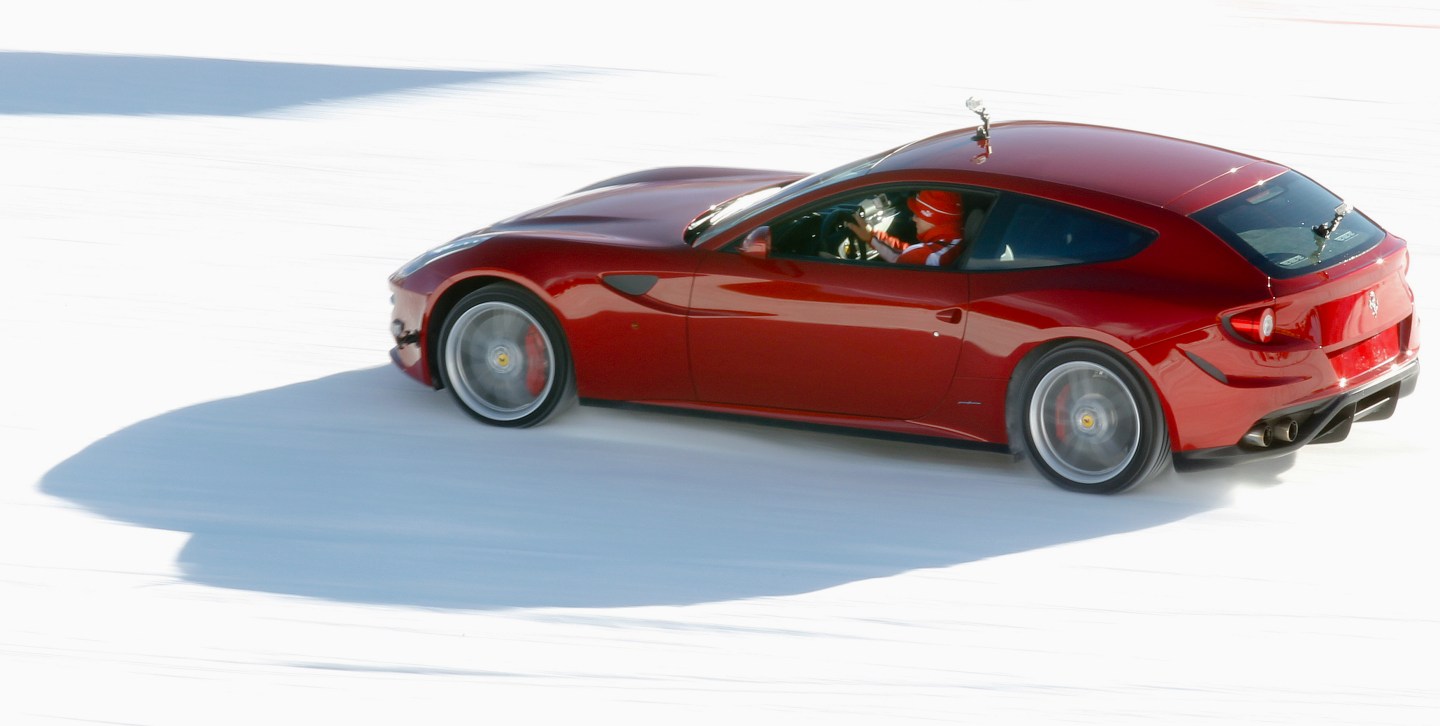 When I pulled into my NYC parking lot in the Ferrari FF, the manager introduced himself to me. It was the first time that has ever happened! He admired the vehicle and told me that he would take good care of it. I handed Alex the keys and a hefty tip. He got into the car and within seconds called out, “Excuse me, how do I get this car into reverse?” Ahhh…the mechanics of a great sports car. You push a button on the center console perfectly placed to meet your hand.

The FF—an acronym for Ferrari Four (four seats and four-wheel drive) is the company’s most powerful and versatile four-seater it has ever produced, as well as Ferrari’s first four-wheel drive car. That’s a long time coming, considering that Ferrari North America celebrated its 60th anniversary in 2014.

The first time I drove a Ferrari was ten years ago. It was a Ferrari F430 around the spectacular Ferrari-Maserati test track in Fiorano, Italy. My Italian racecar instructor took me on a get-acquainted loop around the track and accelerated (to a blur) from 0-62 in four seconds. It sucked the wind right out of me. And just as I regained my composure to let out a slow scream, he dove into a half doughnut around a curve to demonstrate the vehicle’s gripping power. Intoxicating! It was then, and it is now.

Yes, even a Ferrari with four-wheel drive is a racecar at its roots. Our FF was appointed with buttery leather seats cocooned into a streamlined cabin centered by the trademark prancing yellow horse in the wheel and signature yellow tachometer. The FF even has a screen for the front seat passenger so he or she can watch your speed limit. Everything is within easy reach—the shifting toggles are on the sides of the wheel and one can also switch on the fly from city driving to snow, rain or track.

However, this time I was not slicing through wine country and the cobblestone streets of Italy. Truly, everyone from my dentist to my contractor wanted a ride in it. So, first I took my contractor for a spin on the West Side Highway. I wanted him to see the interior – because I want him to renovate my kitchen to look a Ferrari. Kemal was impressed with the nuances, like the way that the steering wheel is flat on the bottom making it easier to slip into the car, the comfortably slanted arm rests, the repetition of curvaceous shapes in the cabin and the sound of the engine. Who can resist that gutsy, primal sound that draws happy smiles from people on the streets and high fives on the highway? By the time Kemal got out he wanted to buy one for his son. No joke!

Next up, Long Island for lunch with my family of four. I had dreams of stretching the FF out on the Meadowbrook Parkway. That was not happening. First of all there were too many police around; secondly my family is too skittish and then, there was that problem of traffic. Bummer.

Ok, so here’s the scoop on the back seat. Yes, this vehicle can fit four people and their luggage. No doubt about that. My son is almost 6 feet tall and folded himself in quite well; my daughter is a pixie so the back seat was a breeze for her. Long journeys for the back seat…I don’t think so. The word on back seat suspension was bumpy. But, hey, this is not what we need from one of the world’s finest sports cars. What we do expect is a very well appointed four-wheel drive sports car with a V12 engine that can kick snow and ice and still bolt from 0-60 in 3.7 seconds. We do not want a Ferrari to look or feel like an SUV.

That said the FF acted like an SUV at Costco for hefty holiday shopping. And I killed it! My test car fit three people (including me) and over $700 worth of groceries in the trunk and back seat. Ahhh…La Dolce Vita!