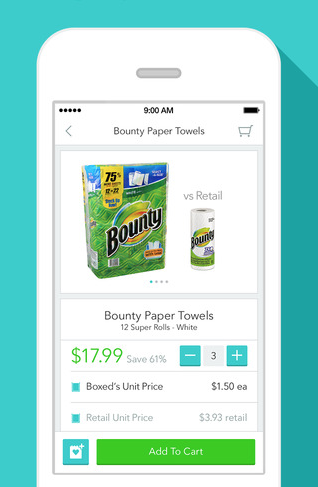 The Boxed mobile application for Apple's iOS.
Courtesy of Boxed

Boxed, a mobile application for wholesale shopping, has raised $25 million in a Series B round of funding. GGV Capital and Digital Sky Technologies led the round with participation from Founders Fund, AME Cloud Ventures, Vaizra Investments, and all prior investors, the company told Fortune. The New York startup has now raised a total of $33 million in venture funding; it will use the new capital to build out its fulfillment capacity and increase its assortment of goods offered.

With a team of just under 30 employees and three warehouses, Boxed has been operating since 2013, when it launched in the Northeast. Now the company delivers bulk goods, ordered with a swipe of the smartphone, to the continental United States. The company wouldn’t release customer numbers, but CEO Chieh Huang said millions of people have tried the app.

A similar company, Jet.com, was featured on the cover of Bloomberg Businessweek last week. That company, which hasn’t yet launched, is headed by Marc Lore, who founded Quidsi, better known as Diapers.com. Quidsi sold to Amazon (AMZN) in 2010, and Lore has raised $80 million to take on Amazon again with Jet. The new company plans to launch in the coming month.

Both Boxed and Jet aim to mimic the big box club retailers like Sam’s Club and Costco (COST) online. The opportunity is a big one. While Sam’s Club and Costco have their own mobile apps, they haven’t made much of a splash in mobile. Sam’s Club, for example, does around $50 billion in annual sales, but only 1% of that is online.

The startups taking slightly different approaches. Jet acts as a platform for third party sellers, similar to Amazon. The site will carry millions of items from a variety of retailers. Meanwhile Boxed acts as a retailer itself, owning its inventory and selling a limited number of items, all sold in bulk.

“We are only first party so we can control speed of delivery and whole experience,” Huang says. “Jet is more of the Walmart going after Amazon and we’re a wholesale kind of experience. We go after discounts because you can only buy the massive pack. You can’t buy a box of 10 granola bars, but you can only buy the 96-pack.” That style of shopping saves money but he acknowledged it is “not for everyone.”

Where Jet was founded by an e-commerce veteran, Boxed’s founding team is made up of ex-gaming industry vets. Huang sold his gaming startup, Astro Ape, to Zynga (ZNGA) in 2011. With Boxed, he’s taking what he learned about making addictive mobile games and applying it to mobile shopping, which is an area he believes lags on optimization. (The company has also applied a number of techie upgrades on the traditional warehouse including Google Glass, iPads and customer service robots.)

Lastly, Boxed differentiates itself by not charging an annual membership fee. (Sams’ Club and Costco charge a respective $45 or $55 per year; Jet will also charge a fee.) Boxed also stocks more green and organic items not sold at the big club retailers. Where 60% of the customers at wholesale club retailers are baby boomer or senior citizens, Boxed’s customers are millennials and late Gen-Xers, Huang says. “Our customers don’t have the time, means or patience to go into a brick and mortar warehouse—if there’s one in their area,” he says. For the last year Boxed has largely remained in the top 100 apps in the lifestyle category, according to App Annie, an app analytics service.

To help it fend off competition, Boxed has a long list of e-commerce experts in its stable. In addition to its new investors (which have backed Airbnb, Flipkart, and Groupon) prior investors include Greycroft Partners, which invested in Trunk Club and The RealReal; Signia Venture Partners; and First Round Capital, where partner Josh Kopelman founded Half.com. ENIAC Ventures, Social Starts, BoxGroup, former Facebook COO Owen Van Natta, and former Zynga executive David Ko were also early investors in the company.