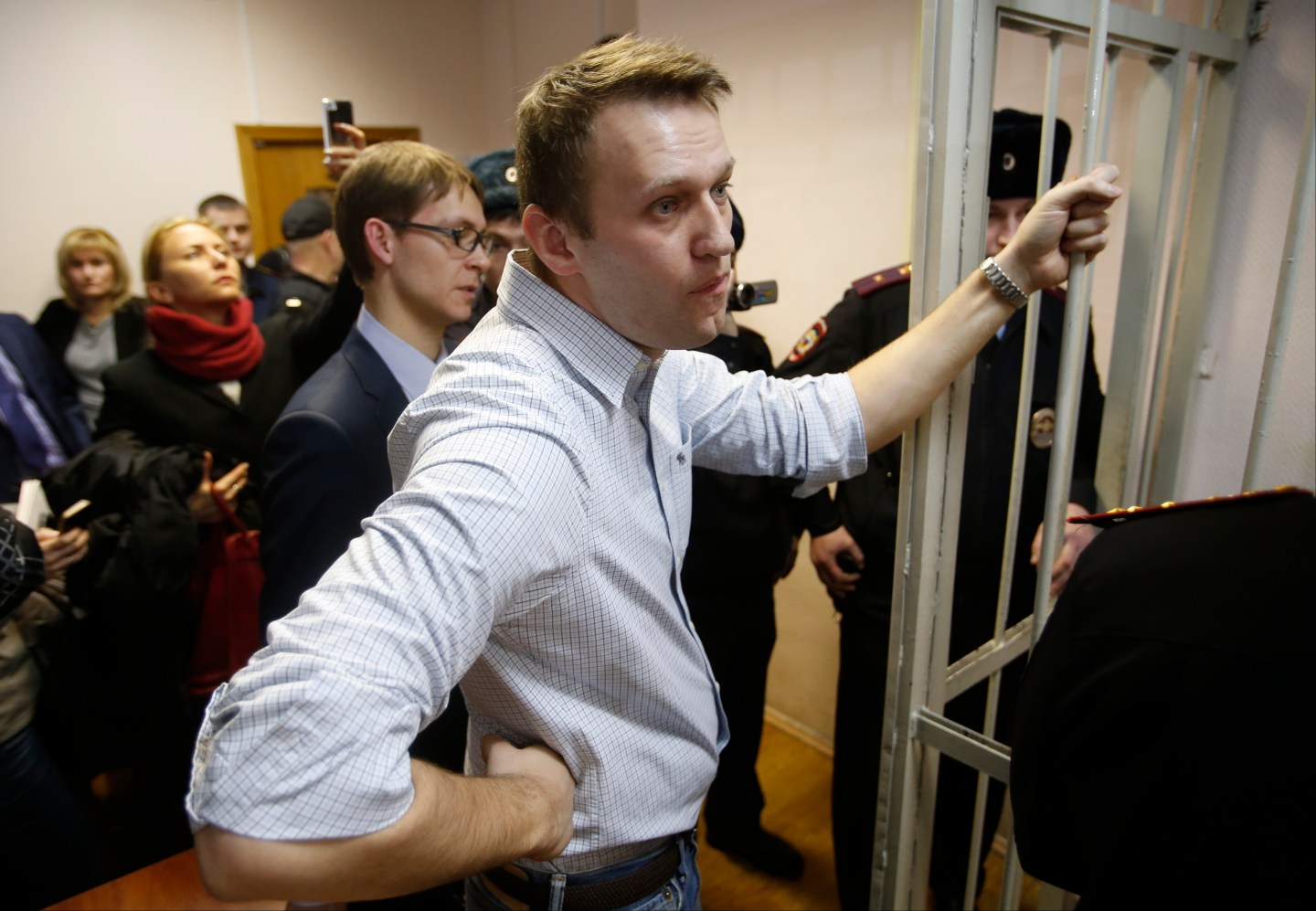 Russian opposition activist and anti-corruption crusader Alexei Navalny, 38, stands at a court in Moscow, Russia, Tuesday, Dec. 30, 2014. Alexei Navalny, the anti-corruption campaigner who is a leading foe of Russian President Vladimir Putin, has been found guilty of fraud and given a suspended sentence of three and a half years. (AP Photo/Pavel Golovkin)
Photograph by Pavel Golovkin — AP

A Russian court gave Kremlin critic Alexei Navalny a suspended sentence on Tuesday for embezzling money, but jailed his brother for three and a half years in a case seen as part of a campaign to stifle dissent.

As hundreds of his supporters gathered in front of the Kremlin, Navalny broke house arrest to join the rally but was swiftly detained and driven back home by police.

Navalny led mass protests against President Vladimir Putin three years ago, when tens of thousands took to the streets in Moscow and St Petersburg to protest against corruption in his government and inner circle.

Opposition figures say jailing Navalny risked a new wave of protests so he was being punished through his brother instead. The EU said the verdict appeared to be politically motivated and a German official said the ruling was a blow to civil society.

The Navalny brothers, Alexei and Oleg, were accused of stealing 30 million roubles, around $500,000 at the current exchange rate, from two firms including an affiliate of the French cosmetics company Yves Rocher between 2008 and 2012.

Tuesday’s ruling will come as a relief for Navalny’s supporters after prosecutors asked that he be imprisoned for 10 years. The Kremlin denies allegations that it uses the courts to persecute opponents.

Officials have taken few steps to investigate Navalny’s corruption allegations. He claimed there was mass embezzlement, including in state bank VTB and pipeline monopoly Transneft, run by close allies of Putin.

“Aren’t you ashamed of what you are doing?” Navalny told the court and judge Yelena Korobchenko. “Why are you putting him (my brother Oleg) in prison? To punish me even harder?”

“The authorities are torturing and destroying relatives of their political opponents. This regime doesn’t deserve to exist, it must be destroyed,” Navalny told reporters outside the court as he was escorted in a car for prisoners.
[fortune-brightcove videoid=3958889807001]

Russian state television channels were not covering the sentencing or mentioned it very briefly, while most Russian print media or radio stations had it among their top stories.

Putin’s spokesman Dmitry Peskov declined to comment and said the president would find out about the verdict from media. Russian media quoted a source in the prosecutors’ office as saying it may appeal Tuesday’s ruling to seek a tougher sentence for Alexei Navalny.

Putin’s popularity has soared over the past year after Moscow’s annexation of Ukraine’s Russian-speaking Crimea peninsula and its incursion in east Ukraine, which led to the worst stand-off with the West since the end of the Cold War. This has eroded the popularity of opposition leaders such as Navalny.

However, falling oil prices and Western sanctions on Russia over Ukraine have triggered a deep economic crisis, a rouble devaluation and double-digit inflation, threatening Putin’s reputation for safeguarding Russian prosperity.

Former Finance Minister Alexei Kudrin, one of the most respected Russian economists in the West, said this month Russia was facing a full-fledged crisis, which could lead to mass protests next year.

“The authorities could have easily put Navalny in jail. But they understand that it would have led to a large wave of protests. So they will torture him through other means,” economist and former central banker turned opposition figure, Sergei Aleksashenko, told independent television channel Dozhd.

“The charges against them (brothers) have not been substantiated during the trial,” said European Union spokeswoman Maja Kocijancic.

“The court’s decision is a further blow to critical civil society in Russia,” he said.

“Alexei Navalny is trying to exercise his right (to freedom of opinion) in a peaceful way. He must continue to be allowed to participate in political life.”

Lawyers for Oleg Navalny said they didn’t know where exactly he would be sent to serve his prison term. Billionaire Mikhail Khodorkovsky, a Putin critic, served his 10-year jail term in penal colonies from northern Russia to east Siberia.