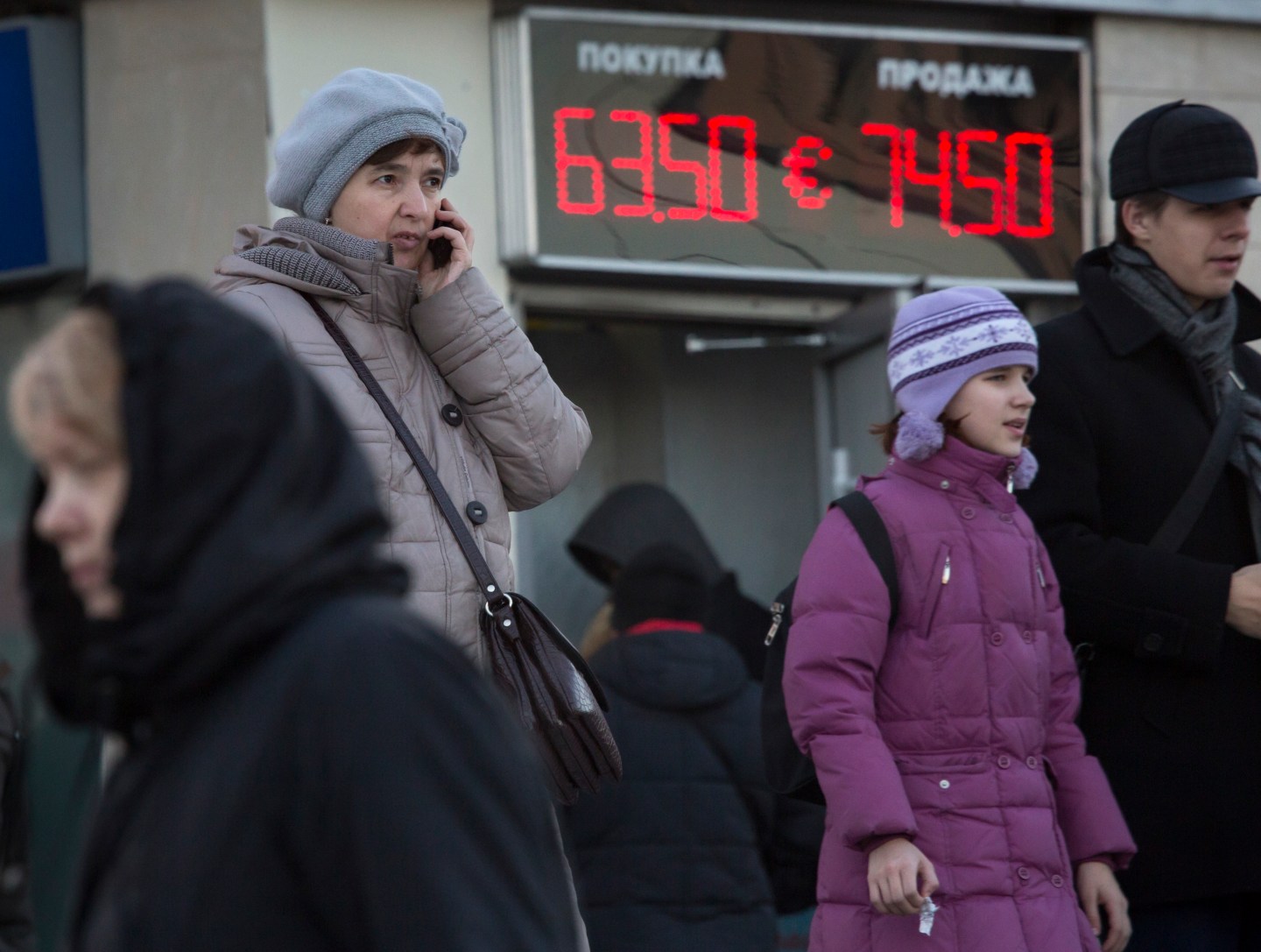 People walk past an electronic display board with figures indicating euro to Russian ruble exchange rate outside a currency exchange office in St.Petersburg, Russia, Monday, Dec. 29, 2014. The ruble has been the worst performing currency this year along with the Ukrainian hryvnia, having lost nearly half of its value against the dollar. (AP Photo/Dmitry Lovetsky)
Photograph by Dmitry Lovetsky — AP

By Elena Fabrichnaya and Alexander Winning

Russia’s economy shrank sharply in November and the ruble resumed its slide on Monday as Western sanctions and a slump in oil prices combined to inflict the first contraction in GDP since the global financial crisis.

The Economy Ministry said gross domestic product shrank 0.5 percent last month, the first drop since October 2009. With oil exports forming the backbone of the economy, analysts said the contraction is likely to worsen.

The slide on the oil market accelerated this month after the exporters’ group OPEC refused to cut output, and prices are down almost 50 percent from a peak in June. On top of this, the sanctions imposed over Moscow’s role in the Ukraine crisis have deterred foreign investment and led to over $100 billion flooding out of the Russian economy this year.

“With the current oil price we expect things to get worse. There is no cause for optimism,” said Dmitry Polevoy, chief economist for Russia and CIS at ING Bank in Moscow. “This is linked to sanctions first of all, oil and the panic we saw on the market in December. The damage to the banking system and consumer sentiment will take a long time to repair.”

The sanctions have severely reduced the ability of Russian companies to borrow abroad, triggering the worst currency crisis since Russia defaulted on its debt in 1998.

The ruble, which had strengthened on Friday, slumped over 6 percent against the dollar in early trade on Monday in thin trade, although it later regained some of the losses.

Overall the ruble’s weakness will inevitably lead to higher inflation next year by pushing up the cost of imports, threatening President Vladimir Putin’s reputation for ensuring Russia’s prosperity.

Government ministries forecast the slump in oil prices will lead to a 4 percent contraction of the economy next year and that inflation could exceed 10 percent.

Falling ruble
The ruble had lost more than half of its value at one stage in December, although it has recovered since then after the government introduced informal capital controls and raised interest rates steeply.

The government issued orders to large state-controlled oil and gas exporters Gazprom and Rosneft to sell some of their dollar revenues to shore up the ruble.

Russians have kept a wary eye on the exchange rate since the collapse of the Soviet Union. Hyper-inflation wiped out their savings over several years in the early 1990s and the ruble collapsed again in 1998.

At 1400 GMT, the ruble had lost over 3 percent against the dollar and was trading at 56.00, hurt by exporters scaling back foreign-currency sales after meeting their end-of-month tax payments.

The Russian currency is much weaker than the 30-35 seen in the first half of the year but well up from an all-time low of around 80 per dollar in mid-December.

The ruble’s slide has prompted huge buying of foreign currency in Russia and heavy withdrawals of bank deposits, heaping pressure on a vulnerable banking sector whose access to Western capital markets is restricted by the sanctions.

On Friday, Russian authorities also significantly scaled up rescue funds for Trust Bank, saying they would provide up to $2.4 billion in loans to bail out the mid-sized lender, the first bank to fall victim to the crisis.