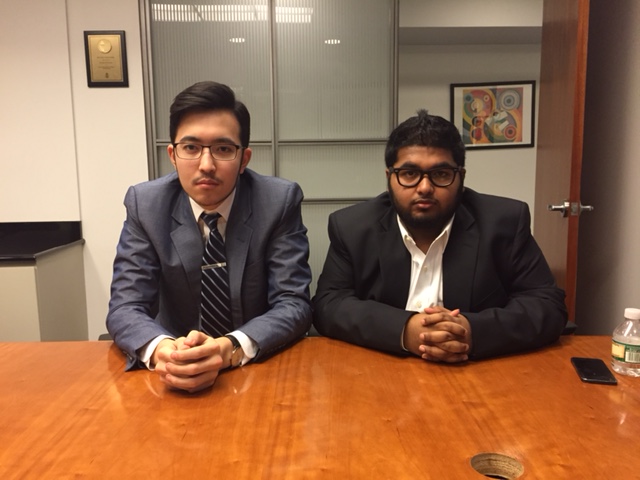 High School students Damir Tulemaganbetov and Mohammed Islam face the aftermath of a story that turned out not to be true.
Photograph by Erica Rodriguez — 5W Public Relations

It was an unusually good year in the market, not just for stocks, but also for hucksters. From a New York City high school senior to a Belizean fisheries officer, 2014 seemed to feature a larger than usual assortment of people claiming they had minted millions in the market. Eventually, all of these claims were debunked. But along the way, bull markets have a way of making, well, bull believable. Here’s a sampling of the year’s best stock market hoaxes.

The teen wolf of Wall Street

New York City "whiz kid" Mohammed Islam, a high school senior, claimed to have made $72 million trading stocks during his lunch hours. The New York Post featured Islam on its cover. CNBC booked him for an interview. He was launching a hedge fund as soon as he turned 18. Jessica Pressler, a writer for New York magazine, said Islam seemed to be the real deal. But a day after Pressler's story came out, it was debunked, and Islam admitted he had duped Pressler.

How much money did Islam actually make in the market? Zero. Wrote Ken Kurson, of the New York Observer, who got Islam and a friend who was in on the fib to fess up, "C'mon, man. This story smelled fishy the instant it appeared and a quick dance with the calculator probably would have saved these young men—and a couple reporters—some embarrassment."

This summer, Wall Street was briefly transfixed by a previously unknown social media company called Cnyk Technology. Cynk's stock soared more than 100-fold in a little less than a month, from pennies a share to $24. That gave the revenue-less company, which had no assets and, really, no product—it said it was developing a Facebook-like site where users could pay to be "friends" with celebrities—a $6 billion valuation.

Cynk CEO Javier Romero, whose stake in the company made him a multi-billionaire, had no record or experience as an executive of a public U.S. company. Since 2009, he had been an officer in the fisheries department of Belize. In mid-July, the SEC halted Cynk's shares, saying the company's stock jump appeared to be the product of manipulation. When the shares began trading later that month, Cynk's stock plummeted.

F-Squared Investments, a little known investment firm based in a suburb of Boston, became one of the fastest-growing firms on Wall Street. It claimed that its sophisticated computer model knew when to buy when the market was rising and when to get out right before stocks were about to drop.

In fact, most of F-Squared's returns were made up, a fabrication hatched by the company's CEO, Howard Present, and an assistant, according to the SEC. F-Squared hadn't actually begun to manage money until February 2009, nearly eight years after it claimed. Its actual returns since then have been unremarkable, especially recently. In December, the SEC charged the company and Present with fraud. F-Squared admitted guilt and paid a $35 million fine. Present, who left the company in November, is fighting the charges.

Steven Kriegsman, president and chief executive officer of CytRx Corp., which was the subject of articles meant to pump the stock on Forbes.com and other financial websites.

Earlier this year, several financial news sites—including Seeking Alpha, Forbes.com, and TheStreet.com, among others—discovered they had been publishing articles by authors who were being paid to promote the companies they were writing about.

In one instance, shares of biotech firm CytRx's soared 50% following a Forbes.com article that touted the company's brain cancer treatment. That article and others came in through the websites' contributor networks, but they were not labeled as advertisements and carried no disclosures that the authors had been compensated by their subjects. In fact, on at least one of the websites—stock blog Seeking Alpha—the articles carried a disclosure stating the author had not received any compensation from anyone outside of Seeking Alpha to write the piece. Seeking Alpha had to admit that some of its disclosures were wrong.

In the end, well over 100 articles were pulled from the several news sites. A number of authors were banned from submitting further contributions to these sites. Many of the articles seemed to have been arranged by an investor relations firm called The DreamTeam Group, which runs a number of its own websites, including Home Run Stocks, Got Stock Tips?, and QualityStocks. DreamTeam appeared to be based in Indianapolis, but the address on its website was actually an abandoned store front in a strip mall.

David Fleet, a house flipper based in upstate New York, had some advice for investors: Don't invest in the market, he wrote in newsletters and advertisements in church publications. Stocks are risky.

Instead, Fleet pitched over 300 investors, many of them elderly retirees, on his real estate business, promising a guaranteed 10% annual return. In all, Fleet raised nearly $17 million. Then, without telling his investors, he took that money and put it into the stock market, where he lost it, proving his initial advice correct. That, of course, didn't win him a reprieve from regulators. In December, the SEC charged Fleet with multiple counts of securities fraud.