Why does this pilot award passengers a bottle of wine after a long flight? 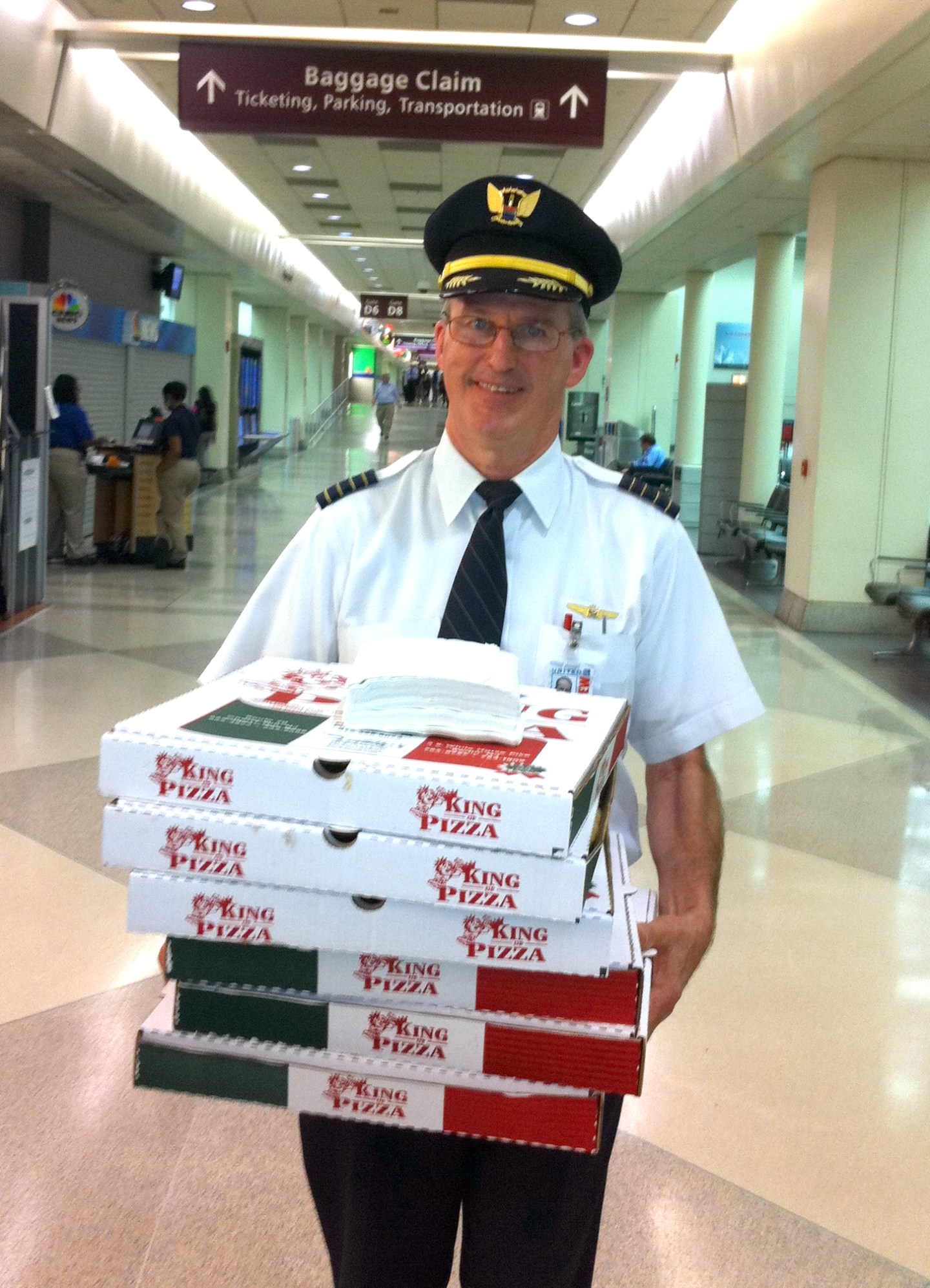 Holiday travel often comes with flights delayed by winter storms, mechanical failures, or schedule snafus. If your flight is hit by a lengthy delay, the pilot you want in the cockpit is Captain Denny Flanagan.

On a recent United Airlines (UAL) flight from Houston to Los Angeles, Flanagan made a gate announcement, introducing himself and sharing flight and weather information. Everyone looked up, expecting bad news, and when there was none, the talk turned to wondering who this captain was. A few minutes later, Flanagan stood at the plane door, handing out trading cards with stats about the Boeing 757 being boarded. After the unusual welcome on the PA, everyone buckled up, ready to depart.

However, when a routine inspection uncovered a small crack in the leading edge of a wing, Flanagan announced a 20-minute delay. That turned into an hour delay for maintenance, and another hour to complete the repair. Most folks got off the plane to try to rebook flights and find food. To the delight of those who stayed on board, Flanagan opened the galley doors and walked down the aisle, handing out free food as he asked the flight attendants to serve drinks.

During this season of holiday travel, when sniffles and delays run rampant, it was like getting an unexpected gift from Santa. “In the service business, the recipe for success is quite easy,” the pilot says. “Choose your attitude for the day, anticipate your customers’ needs, and exceed their expectations. I call the cockpit my sky office, and I’m the CEO. I run the airplane, and I take care of the crew and customers.”

Flanagan, a former lieutenant commander in the U.S. Navy, said he flew C-130 transport aircraft in support of Operation Deep Freeze in Antarctica and P-3 Orions (maritime surveillance aircraft) for 20 years before joining United in 1986. Since the Navy planes had crews of 14, the mission-oriented pilot routinely looked after those under his command.

Flanagan, who still flies in the Naval Reserve, kept that mindset when he became an airline pilot. After 9/11, when the airline industry was hit hard, 3,600 United pilots were furloughed. Flanagan, clearly a go-getter, decided to do what he could to build customer loyalty, hoping that as business came back, the pilots who had lost their jobs could also return to work.

Thus the gate announcements, the trading cards, and other little touches began. Whenever unaccompanied minors are on the plane, Flanagan calls the child’s parents before take-off to let them know all is well. During layovers, he writes thank you notes on the back of his business cards for the next flight, adding passenger names from the manifest after boarding.

“I usually give out 50 cards on each trip,” Flanagan says. “I write them to the passengers sitting in first class, and to those sitting in middle seats in coach. We’ve all been in that middle seat, and when the person on either side of you takes an arm rest, it’s not that comfortable.”

The captain figures if a flight attendant hands the middle seat passenger a note from the pilot, those on either side will take notice and strike up a conversation. Usually, that conversation ends up with people sharing the arm rests.

Many acts can be considered exceptional customer service, but the most meaningful ones are really unplanned acts of kindness. In 2008, a passenger who got one of Flanagan’s notes wrote back, asking if the pilot could get an electric wheelchair to a handicapped boy in Honduras. Flanagan’s calls to colleagues in United Cargo and then-Continental Airlines got the wheelchair delivered, at no charge, on Christmas Day.

During the holidays, Flanagan notices more leisure travelers and first-time flyers. Along with passing out pilot wings to kids in the gate area, he carries canvas bags in his suitcase to give to parents whose gift-loaded paper shopping bags have ripped. Whenever the captain sees military passengers traveling as a group, he gets on the PA at the gate and suggests how nice it would be to exchange seat assignments to make the trip more comfortable for those who are risking their lives to serve.

“I did this with one group of 20 young men and women flying together,” Flanagan recalls. “There was a lot of crying and hoo-rahs, and every one of them got a seat in first class from another passenger.”

Flanagan’s positive attitude and willingness to engage with customers has made him a celebrity among frequent flyers who refer to him as “Captain Denny.” His flight schedule is posted on flyertalk.com, and a number of fans book their flights around it.

A board posting from a user named Goalie: “I met him at his arriving gate during a mutual layover (at IAH). As we were walking from his gate to mine, a woman and her daughter were walking in the opposite direction and in the blink of an eye, he stops, reaches into his pocket, pulls out a pair of wings and gives them to the daughter. And the smile on the little girl’s face was what it’s all about.”

Pat89339 wrote, “For people in the San Francisco area, we are in the planning stages of another dinner (with Captain Denny). I will post more when the date is settled.”

Occasionally dining with passengers — who vie to buy him meals when he’s available on layovers — Flanagan has even been known to buy hamburgers or pizza for all his passengers when flights are delayed longer than two hours. United foots those bills.

In 2010, the airline filmed Flanagan, following him around on a typical day, and turned it into a training video shown to all new hires. While Flanagan is not the only pilot to provide great customer service, you have to wonder why more don’t stand out like him.

Customer service may be innate to Flanagan, but it’s also a skill that can be taught and a behavior easily measured. Flying safely, of course, must be at the top of a pilot’s performance review, but points for customer service should be in the mix, as well. “Captain Flanagan is an outstanding employee, and we support his – and all of our pilots’ – efforts to go above and beyond for our customers to provide great service,” says Jennifer Dohm, a spokesperson for United. “As far as anyone can remember, Denny has always operated this way, and we commend his dedication to creating the most flyer-friendly experience he can for our customers.”

Remember those trading cards Flanagan hands out at the beginning of every flight? He also autographs two of them, and if there’s wine left over in first class at the end of the flight, two passengers with autographed cards get to take home a free bottle of wine.

After the recent delayed flight landed, passengers received e-mails from United’s Proactive Recovery Operations Team, offering $50 off their next flight or extra bonus miles, as a gesture of appreciation.

Being proactive about customer service is essential for any business to survive and thrive, people like Flanagan appear to make exceptional ambassadors for United.

“I like to treat my customers as if they were my family flying with me,” Flanagan says. “I’ve got a blessed life with my wife and children. When I see people in wheelchairs, injured soldiers, and those who aren’t as healthy as I am on our planes, I’m grateful that I’m able to do what I’ve always wanted to do, which is fly airplanes.”

Flying with Flanagan is an experience customers long remember. After all, who could forget flying with Santa’s helper?