Can this app convince regular people to play fantasy sports? 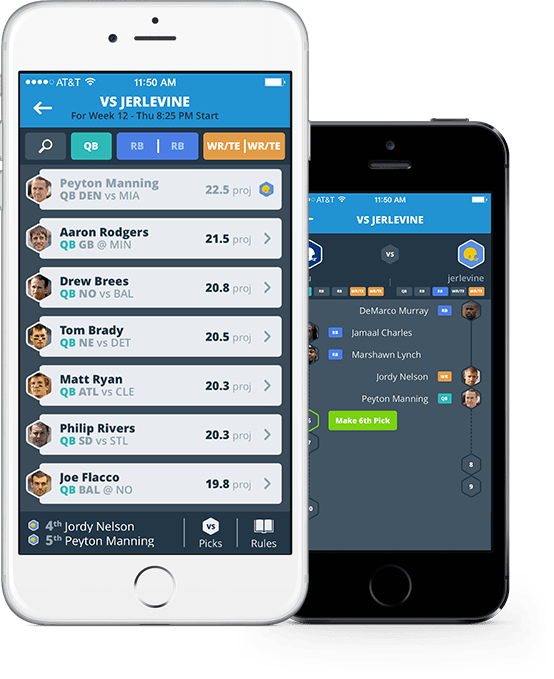 It’s a little ironic that fantasy football, which was hailed in its early days as a way to bring new football fans to the sport, has instead become a sort of haven for wonky data geeks.

On the daily fantasy sites DraftKings and FanDuel, the most successful participants are serious stat-heads who come armed with spreadsheets and conduct careful research to make big money. Each of the sites is growing quickly and inking big partnerships with leagues and teams, and each recently raised a massive funding round: for FanDuel, a $70 million Series D round in September; for DraftKings, a $41 million Series C in August. Each property has over 1 million registered users.

At the other end of the spectrum are a number of new fantasy sports sites that aim to lower, not raise, the barrier to entry. David Geller’s company Daily MVP, which recently landed New England Patriots quarterback Tom Brady as a spokesman, is one of them. “Daily fantasy has taken two directions,” says Geller, who used to run fantasy sports products at Yahoo (YHOO). “The big two require more research and knowledge—it’s based on salary cap—and even if you know what you’re doing, the likelihood of winning is very low. Our view is that it should be fun, a way to engage with the sport, and a social experience.”

Another entrant that is betting big on fantasy newbies is Draft, a mobile game launched this month by Jeremy Levine and Nicolo Giorgi, co-founders of StarStreet, one of the first daily fantasy products. (StarStreet was sold to DraftKings in August for an undisclosed amount.) Levine also has a small venture fund called Bridge Boys, a reference to his roots in Cambridge, Ma., with Jordan Fliegel, founder of the private coaching web site CoachUp. (See previous coverage in Fortune: “Old athletes never die, they just move to your iPhone“)

“If you ask ESPN and Yahoo, they’d say they have been on mobile for years. But that’s only been out of fear of not losing their users,” Levine says. “No one has really built a fantasy game just for mobile, which is crazy.”

FanDuel and DraftKings each have mobile products, but their structure is based on selecting a roster of players within a salary cap. Levine argues that approach to fantasy sports puts too high a bar in front of new users. “Salary cap is definitively not a mobile game,” he says. “To play it, you need to do a ton of research, take a ton of time, look through player lists.” Geller, of Daily MVP, agrees. “At Yahoo we had a sal-cap game and every year we debated whether to kill it, and we finally did,” he says. Indeed, Yahoo no longer offers a fantasy football game based around salary cap.

Draft is indeed simple—so simple as to become, for some, quickly boring. Instead of a league-based approach, the game is structured as a head-to-head matchup (you can face a friend or a stranger) that lasts for one week. The drafting process in Draft follows a “snake” format: you begin the draft and select one player, your opponent chooses two, then you choose two, and so forth. For NFL football, each player selects one quarterback, two running backs, and two wide receivers or tight ends.

In practice, drafting players with Draft is fun and fast—waiting on your buddy to pick is much like playing Words with Friends. Once the game begins, though, there are no bells and whistles. The matchup screen shows each player’s score in a colorful, clean design but without any statistics to explore. There is no way to tell exactly how, for example, Pittsburgh Steelers running back Le’Veon Bell has earned his 13.20 points. But the lack of depth is the point. “If we get this right,” Levine says, “we are building the lowest-barrier, casual [fantasy] game that you can just pop into. Someone who just knows who the big quarterbacks are can do fine, because it’s not about no-name players. You can just pick stars and see who will do better.”

Draft also launched fantasy NBA basketball this week; Levine says more sports are in development. For now, the app is only available for devices that run Apple’s iOS operating system. To date, the company has raised $2.1 million in venture funding from investors such as SV Angel, the San Francisco angel investing firm co-founded by Ron Conway.

Draft has the potential to build a sizable user base without needing to compete with larger, expert-focused competitors, Levine says. And the growing interest in fantasy sports helps all competitors in the category, large and small, he adds. A rising tide lifts all boats. “Once people get really comfortable with us,” he says, “they can go play [more complicated fantasy games].” Draft’s next challenge will be retaining its user base with more features and a deeper experience. As overall knowledge about fantasy sports grows, Draft won’t be so ready to let its users flee for more wonky pastures.

For now, Levine frames Draft specifically as a place where you can trust that you won’t find experts. “When we did StarStreet, we got all the best players playing on there, which is actually a bad thing,” he says. “If you’re a poker player, you don’t want to play against Phil Ivey.” Others may see it differently—sometimes there is appeal in trying your hand against the best. One thing is for certain: the best won’t be on Draft.