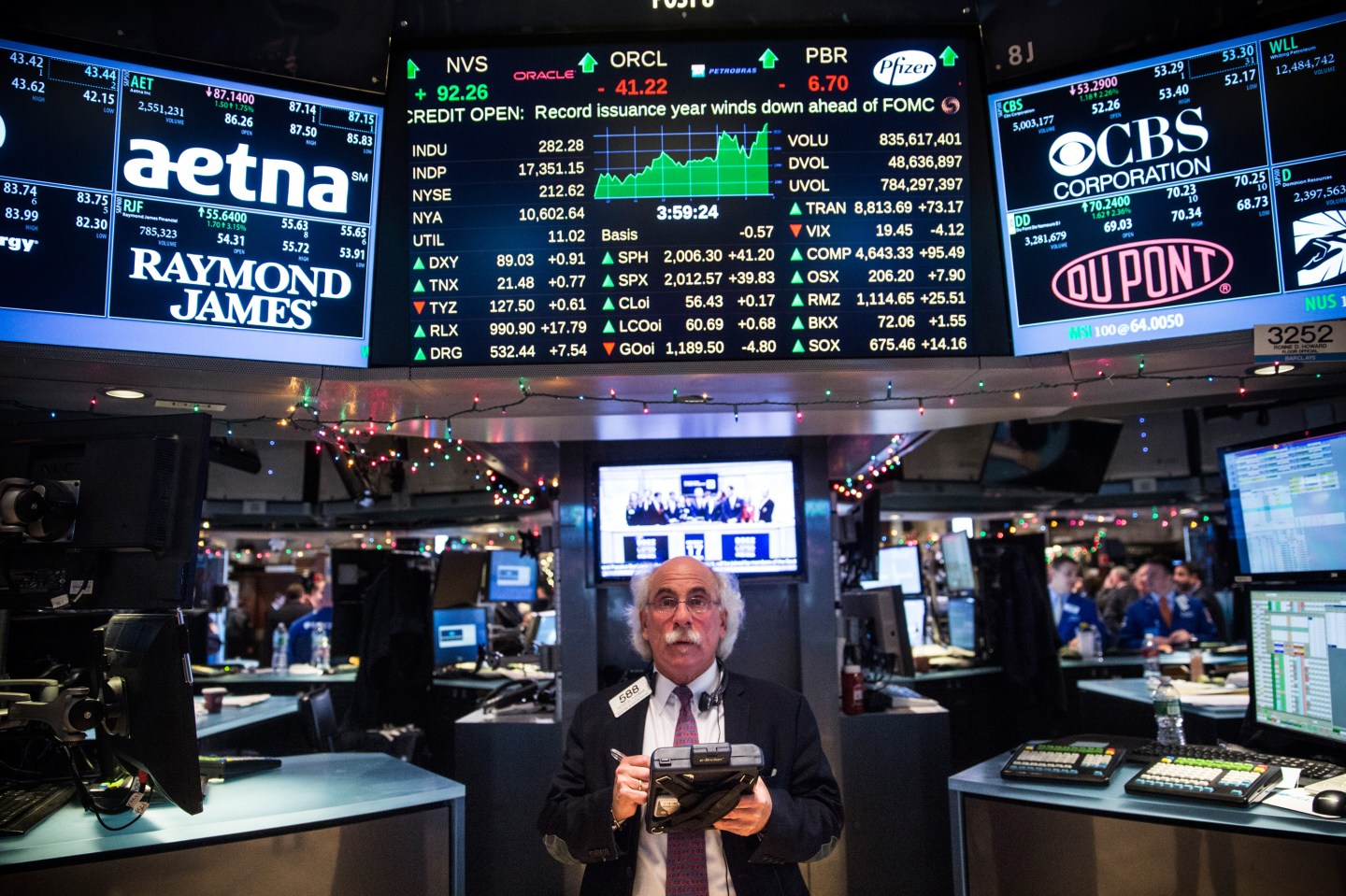 NEW YORK, NY - DECEMBER 17: A trader works on the floor of the New York Stock Exchange during the afternoon of December 17, 2014 in New York City. Stocks rose nearly 300 points, marking the best day for the Dow Jones Industrial Average of 2014, after the Federal Reserve announced it plans to begin raising interest rates next year. (Photo by Andrew Burton/Getty Images)
Photograph by Andrew Burton — Getty Images

By Ian Salisbury and Jacob Davidson

It was a good year to be in the stock market. With the economy finally seeming to hit its stride, the S&P 500 — comprising the 500 biggest U.S. companies — has so far returned about 12%, compared to an annual average of just above 5% over the past decade.

Of course, the spoils weren’t evenly shared. Factors like falling oil prices and America’s continuing infatuation with gadgets and social media meant some stocks were big winners, while others actually left shareholders poorer — on paper — than they were in 2013.

Here’s a selective look at some of the year’s hottest and coldest S&P 500 stocks, with a focus on companies that many consumers interact with every day.

From cramped seats to hidden fees, consumers loathe airlines. But a strengthening economy and the recent sharp drop in oil prices — fuel typically accounts for a third of airline operating costs — mean airline investors have been flying high.

To cap it off, in December, a woman gave birth to a healthy baby boy on a Southwest flight from San Francisco to Phoenix in December. “I can’t think of anything else that’s going to top that,” Captain John Gordy told ABC.

Chances are you’re loving low gas prices. But chances are you also aren’t stuck with a fleet of drilling rigs you’re looking to lease. The lower oil goes, the harder it is for marginally profitable wells to stay in the black. That in turn means more and more drilling equipment sitting idle. It’s added up to a terrible year for rig owner Transocean (RIG). Shares are down 58%, more than any other stock in the S&P 500.

The Botox maker’s stock just about doubled in 2014. The company’s October earnings release beat analyst expectations, but it’s the year-long bidding war over Allergan (AGN) that’s really juiced the stock price. After spurning an attempted hostile takeover by Valeant Pharmaceuticals and hedge fund manager Bill Ackman, the company finally agreed in November to be purchased by drug-maker Activis for $66 billion.

Years of attempted makeovers haven’t prevented the steady decline of Avon (AVP), the iconic cosmetics brand best known for its legions of “Avon Lady” representatives who make sales calls in customers’ homes. The key to this direct-sales model are the reps themselves — keeping them motivated, well-supplied, and growing in number, that is — but the size of Avon’s U.S. sales force has in fact declined by about half since 2007. Domestic sales fell 21% in the first half of 2014 alone. A new website and overseas growth are reasons for optimism. And in December, the company did finally settle (for $135 million) Justice Department and SEC charges over allegedly improper payments to Chinese officials that had been dogging it for years. But with the stock ending the year down around 43%, the market appears skeptical.

Video game maker Electronic Arts (EA) has had it’s struggles — consumer blog Consumerist named it Worst Company in America two years running in 2011 and 2012. But the maker of titles like “The Sims” and “Battlefield” named a new chief executive in 2013. With help from the arrival of new Sony PlayStation and Microsoft Xbox consoles, the company posted a profit in its latest quarter after losing more than $270 million a year ago. Shares have doubled year to date.

The leather-goods maker seems to have over-indulged on discounting, especially at factory outlets, undercutting its upscale aura. To turn things around, Coach (COH) brought in a new star designer and is attempting to redefine itself as a broad “luxury lifestyle” brand (like competitor Michael Kors) not just a handbag maker. Meanwhile, it’s also closing a fifth of its North American stores to focus on urban flagships, and that cost sales. For 2014, the stock is down about 32%.

There are few stocks hotter than Keurig Green Mountain (GMCR), the K-cup coffee pod maker, up more than 80% in 2014. What’s the secret to that success? Like Monster Energy, another 2014 top performer, the company earned an important vote of confidence from Coca-Cola, which in February paid $1.25 billion for a 10% stake in Keurig and then upped it to 16% a few months later. As the Motley Fool points out, Keurig has also done a good job keeping its older partners (like Starbucks) happy and courting new ones like Kraft’s Maxwell House Coffee. The company’s shares were buffeted in November by a departing CFO and somewhat modest earnings forecast, but that hasn’t put too much of a damper on the company’s extraordinary growth.

A customer looks over video games for sale at a GameStop Corp. store in Peru, Illinois, U.S., on Wednesday, March 26, 2014.

Electronic Arts may have been one of the year’s top stocks, but not all video-game-related companies had a good 2014. The industry’s transition from in-store sales of game disks to digital distribution allows publishers to circumvent brick-and-mortar retailers like GameStop. (Electronic Arts itself, in fact, recently inked a deal with Microsoft to provide some of hits through an online subscription service.) The problem is compounded because GameStop long made a significant chunk of its profits on used game sales, which depend on the existence of physical game disks — customers generally can’t re-sell digital copies. Meanwhile, Amazon and other online retailers are brutal competitors on hard-copy sales. All told, GameStop (GME) was down about 33% in 2014.

President Obama’s surprise announcement that he would end restrictions on travel to Cuba sent shares of Royal Caribbean (RCL) spiking, along with the stock of practically every company with a Cuba connection. But the cruise line’s stock was already well on its way to a banner year. Declining oil prices has dramatically cut one of its primary expenses. Meanwhile, demand for berths has been growing in the U.S. as consumer spending picks up; and Royal Caribbean was the first major line to send a state-of-the-art ship — in this case, the $1 billion Quantum of the Seas — to China, where it will cater to the country’s burgeoning leisure market out of its new home port of Shanghai. The stock is soared 80% in 2014.

Barbie may have met her match in Anna and Elsa. Disney’s princess duo — not to mention longer term trends like computer games — have taken their toll on Mattel (MAT). While results aren’t yet in for the all-important Christmas season, Barbie sales have fallen four straight quarters. “Girls have a lot of other choices,” toy analyst Sean McGowan recently told the New York Post. Mattel’s stock has fallen by nearly a third so far this year.

Shares of Monster Beverage (MNST) jumped 30% in August on news that Coca-Cola planned to buy a 17% stake of the company. The Wall Street Journal suggested Coke might have bought the concern outright if Monster — whose drinks carry names like “Assault” and “Khaos” — didn’t contrast so starkly with Coke’s more classic image. Investors don’t seem to mind. Overall shares are up about 70% in 2014.

For years Internet behemoth Amazon (AMZN) seemingly defied stock market gravity. While shareholders usually punish a stock when company managers prove unable — or unwilling — to produce profit, that rule never seemed to apply to Amazon. CEO Jeff Bezos always managed to persuade investors to funnel would-be earnings back into growth. Indeed, sales have exploded, growing more than tenfold in 10 years, from less than $7 billion in 2004 to more than $80 billion today. But after a $400 million loss in the first half of 2014 and a big miss with the much-hyped Amazon Fire phone, investor patience may finally be running out. So far this year shares are down 23%.

Under Armour (UA) took the sportswear world by storm in 2014. The stock is up over 60% since January 1, 2014, a performance worthy of a company that took home both Yahoo Finance’s Company of the Year award andthe title of Ad Age’s Marketer of the Year. Revenue is on track to increase by 30%; its women’s brand has emerged as a success; and it’s set to add tennis star Andy Murray to its growing list of athlete endorsers.

New cars sit on the sales lot of a Chevrolet dealership.

Falling oil prices have re-ignited Americans’ appetite for cars, particularly the super-sized ones GM (GM) is known for, like the Cadillac Escalade, which saw sales jump 75% in November. Unfortunately, booming sales in North America haven’t quite made up for weakness in foreign markets like South America and Europe, where GM lost nearly $400 million last quarter. Factor in months of controversy following the company’s February recall of faulty ignition switches — now linked to more than dozen deaths — and the year has been a grim one for GM investors. Shares are off 21%.

Apple (AAPL) started the year as the most valuable company in the world, with a market value of just over $500 billion. Since then a well-received new iteration of the iPhone has helped put to rest doubts about whether CEO Tim Cook can fill the shoes of the late Steve Jobs. So far this year, Apple is up 42% and is now worth a whopping $712 billion. Not that it can rest on its laurels: Investors and Apple fans are anxiously awaiting the company’s attempt to re-invent yet another everyday item — the wristwatch. How that fares could help determine whether Apple becomes the first $1 trillion company.

Kale isn’t just for hipsters any more. Sales of organic and natural foods are booming, and no company deserves more credit than Whole Foods (WFM). But with these once niche products going mainstream — even Walmart carries a line of organic food now — the Austin, Texas-based supermarket chain risks becoming a victim of its own success. Walmart’s sales pitch: It claims to undercut the competition on price by 25% or more. “For a long time Whole Foods had the field to ourselves,” founder and co-chief executive John Mackey told investors in May, according to The Wall Street Journal. “That was nice, but we don’t anymore.” Shares are down 18%.

Honestly, how could Facebook (FB) continue to grow so fast, when everyone you know is already on it? Amazingly that’s just what it managed to do in 2014: The company logged third-quarter revenue of more than $3.2 billion, a 50% jump over the year-ago figure. The secret? Facebook appears to have cracked the code in terms of helping advertisers reach consumers on their smartphones — mobile adds represent about two-thirds of advertising sales. That’s a big deal when fewer and fewer of us are relying just on our desktops. Overall shares are up 40% this year.