Why the next world war will be fought over food 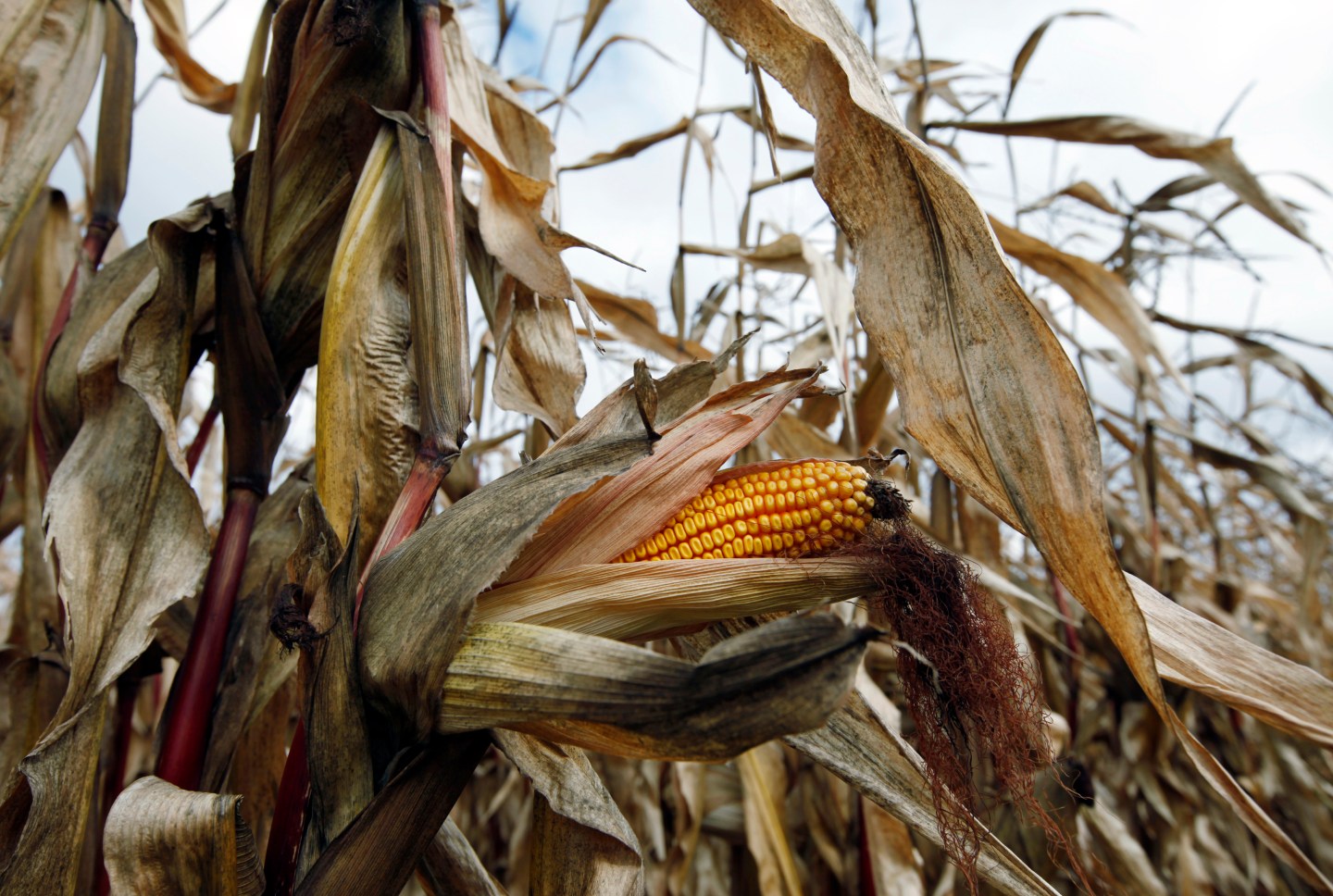 A field of corn is seen in Embrun, Ontario, October 16, 2010. Senior OECD (Organisation for Economic Co-operation and Development) official Carmel Cahill told Reuters on Friday she does not expect a repeat of the 2007-2008 food crisis because market fundamentals are different now. Cahill added that grain markets were overreacting to the crop situation in Russia and the United States and there is no global shortage of wheat and corn at the present. REUTERS/Shaun Best (CANADA - Tags: AGRICULTURE BUSINESS) - RTXTIIA
Photograph by Shaun Best — Reuters

The world has a massive food crisis on its hands. The crisis is so big that organizations like the World Bank and the United Nations say there won’t be enough food to feed the global population when it jumps from the current seven billion people to nine billion by 2050.

Some research even suggests a food scarcity crunch as early as 2030 — just 15 years from now.

The reasons? Severe weather events like droughts and floods, economic hardships, and political unrest in underdeveloped countries, as well as agribusiness expansion.

While many experts say that producing more food will make the crisis go away, others contend it’s not that simple.

“To address food security, we need a shift in the way we address poverty and inequality in the world,” Stephen Scanlan, a professor of sociology at Ohio University. “There should be a reframing of food as a fundamental human right in a way that governments actually stand by.”

And those companies are seeing benefits. Global food prices increased by four percent between January and April of this year, according to the World Bank, stopping a decline in food prices starting in August 2012.

While those figures may please company shareholders, that kind of consolidation and profit puts too much control over food supplies into too few places, according to critics like Scanlan. Beyond the perceived threats from the business world, global food supplies, one analyst argued, are at the mercy of some nations seeking to feed their own populations at the expense of others.

“China is the largest purchaser of farmable land in the world,” said Usha Haley, a professor of business management at West Virginia University. “They’re doing it to acquire resources as they have a huge gap between what they produce and what they use.”

For many, food scarcity is already here. The UN’s Food and Agriculture Organization (FAO) reports that 842 million people in the world remain undernourished. And nearly two thirds of them are living in the Asia-Pacific region. One in four children under the age of five is stunted due to malnutrition.

Fueling the problem are worldwide diets that rely on an ever smaller group of crops, leaving global food supplies at the mercy of inflation, insects, disease, and bad weather. Also, there’s the increasing creation of inedible products — such as fuel — from crops that normally get put on the kitchen table.

“What concerns us is biofuel expansion,” said Kristin Sundell, director of policy and campaigns for ActionAid, an international group that focuses on ending poverty.

“We’ve seen a 50 percent expansion in recent years in using crops like sugar, corn and soy to create fuels for gas tanks, and that’s taking away food crops from people and making what there is more expensive,” Sundell said.

Sundell added that the large-scale investment by private agriculture businesses to buy up more farm land in poor countries is forcing local growers out of business. Farmers who do have land in areas like East Africa often face a Faustian bargain, said Scott Ickes, a professor of public health and nutrition at the College of William & Mary.

“Farmers have to choose between growing specialty cash crops like cocoa, tea and coffee — or food staples to make a living,” Ickes said. “They usually pick the cash crops as it’s a challenge for them to make ends meet.”

Helping those help themselves

While agricultural innovations like genetic modified organisms (GMOs) — hailed by many and condemned by others – are often offered up as solutions, one analyst said simple ways to distribute and store food are needed.

“A lot of food rots because of bad storage facilities in poor countries, and bad infrastructure in those areas prevents delivery of food to a lot of the poor,” said College of William & Mary’s Ickes.

A key element in all this is helping those in need learn how to take care of themselves, said Mark Rieger, dean of the College of Agriculture and Natural Resources at the University of Delaware.

“We have an agricultural program so people can develop their own food,” Rieger said. “I just got back from Kenya where we bring students here and then send them back home to help their own countries.”

The World Bank reports that to avoid food shortages by 2050, the global community needs to produce at least 50 percent more food than it does today.

Many analysts say they are hopeful the world is waking up to the food scarcity problem, as more governments like the U.S. and those in Europe, ramp up efforts to provide aid to developing countries.

But a clear consensus on exactly how to end the growing food shortage remains elusive. And that could lead to even greater disasters, said West Virginia’s Haley.

“The food scarcity problem is serious. I think the next world wars could be fought over resources like food and water,” she said.