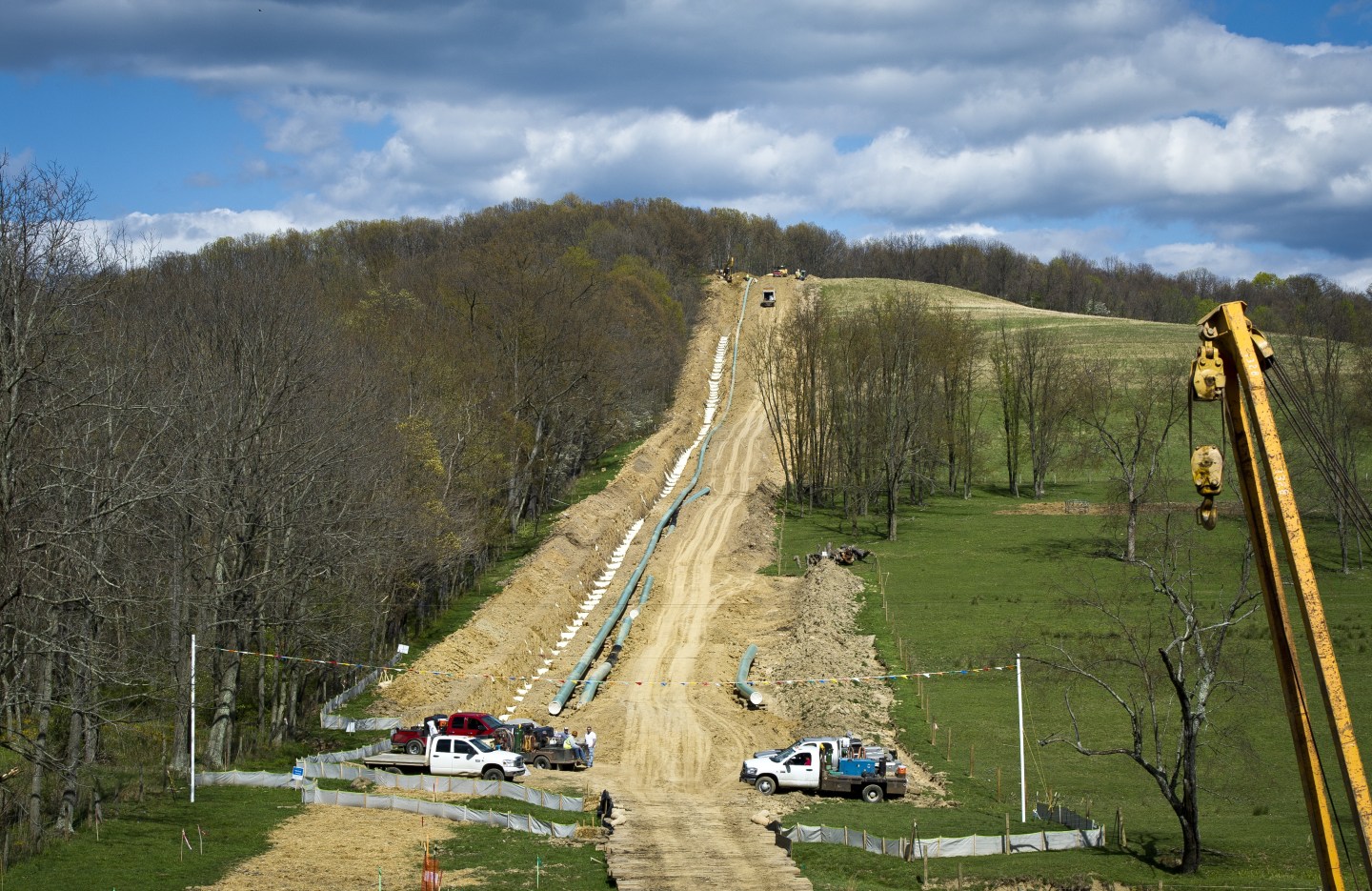 With AFP Story by Veronique DUPONT: US-Energy-Gas-Environment Workers lay the pipes of a gas pipeline outside the town of Waynesburg, PA on April 13, 2012.It is estimated that more than 500 trillion cubic feet of shale gas is contained in this stretch of rock that runs through parts of Pennsylvania, New York, Ohio and West Virginia. Shale gas is natural gas stored deep underground in fine-grained sedimentary rocks. It can be extracted using a process known as hydraulic fracturing ? or "fracking" ? which involves drilling long horizontal wells in shale rocks more than a kilometre below the surface. Massive quantities of water, sand and chemicals are pumped into the wells at high pressure. This opens up fissures in the shale, which are held open by the sand, enabling the trapped gas to escape to the surface for collection. AFP PHOTO/MLADEN ANTONOV (Photo credit should read MLADEN ANTONOV/AFP/Getty Images)
Photograph by Mladen Antonov — AFP/Getty Images

New York Environmental Commissioner Joseph Martens said at a cabinet meeting he will issue an order early next year banning fracking, which has been under a moratorium since 2008. Once that happens, New York will join Vermont as the only states to completely prohibit fracking.

The decision ends what has been a fierce debate in New York over the benefits and pitfalls of fracking, a process that involves pumping water, sand and chemicals into a well to extract oil or gas. Many in the state saw gas drilling as a key economic resource while others argued it was too dangerous.

The state’s health commissioner, Howard Zucker, said there is not enough scientific information to conclude that fracking is safe.

“The potential risks are too great, in fact not even fully known, and relying on the limited data presently available would be negligent on my part,” Zucker said.

New York sits atop a portion of the Marcellus shale, one of the largest natural gas deposits in the United States. The ruling is a blow for energy companies that had been waiting for years to tap the thousands of acres of land they have leased there.

The oil and gas industry immediately slammed Cuomo for the decision. Karen Moreau, the executive director of the New York State Petroleum Council, called it a reckless move that would deprive the state of thousands of jobs and hundreds of millions of dollars in revenue.

“We are resolved to continue to fight for these benefits in New York,” she said.

Environmental groups, meanwhile, hailed Cuomo as a national leader on the issue.

“We hope that this determined leadership Governor Cuomo has displayed will give courage to elected leaders throughout the country and world,” said Deborah Goldberg, an attorney with the group Earthjustice.

Cuomo, answering questions from journalists, said the decision on whether to allow this kind of drilling in New York was ultimately up to Martens. He said it was “probably the most emotionally charged issue I have ever experienced,” more than gay marriage, gun control or the death penalty.