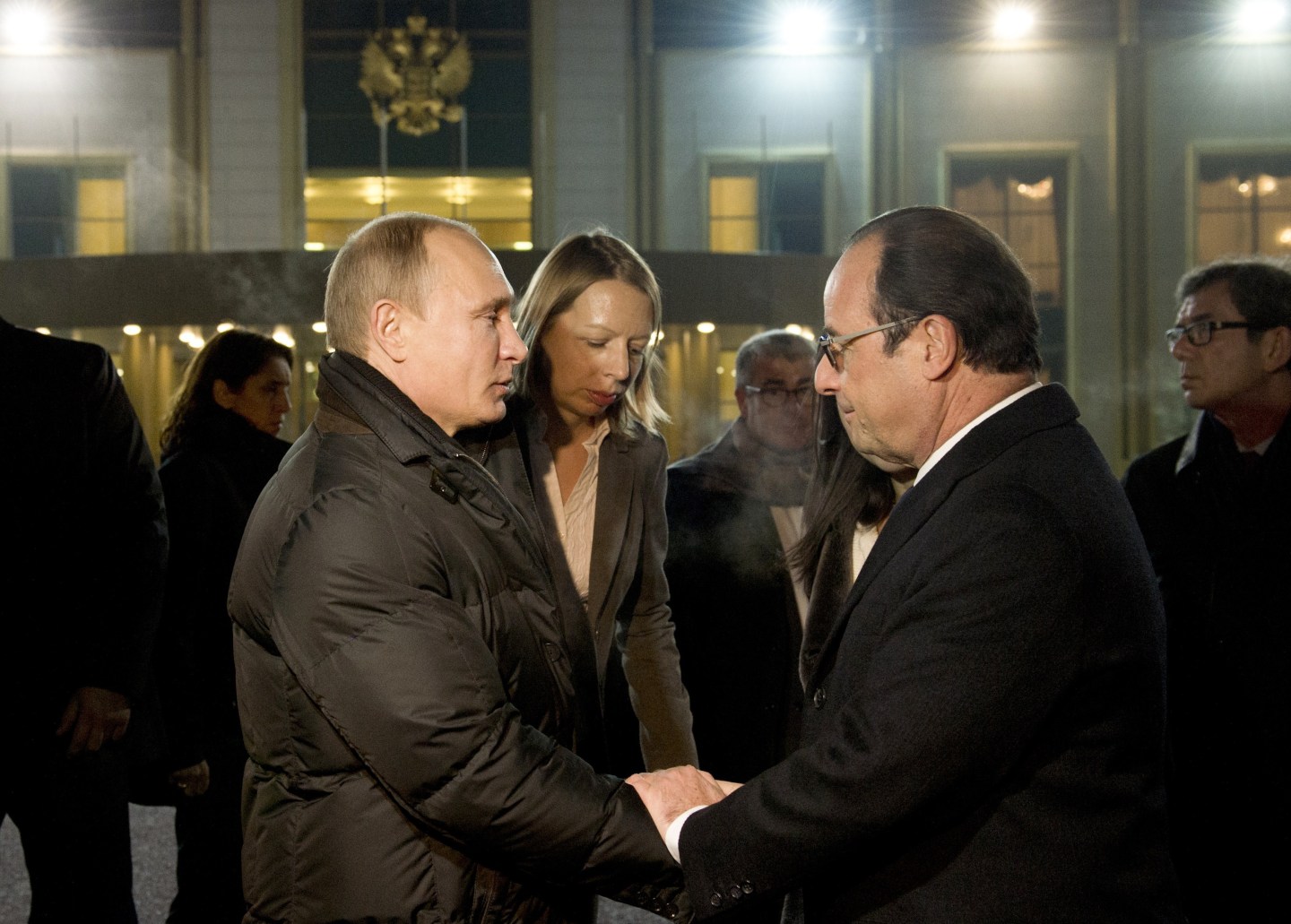 Russia's President Vladimir Putin (L) shakes hands with French President Francois Hollande as he escorts him to his plane after a meeting in Moscow, on December 6, 2014, following Hollande's two day visit to Kazakhstan. Hollande became the first European leader to fly to Russia in an attempt to defuse the standoff with Vladimir Putin over Ukraine, where the latest round of peace talks will take place next week. AFP PHOTO / POOL/ ALAIN JOCARD (Photo credit should read ALAIN JOCARD/AFP/Getty Images)
Photograph by Alain Jocard — AFP/Getty Images

(REUTERS) – Russia’s central bank raised its key interest rate to 17 percent from 10.5 percent early Tuesday in an emergency move to halt a collapse in the rouble as oil prices decline and the country’s sanctions-hit economy slides toward recession.

The rouble strengthened sharply after the decision, recouping some of its heavy losses on Monday, when the currency staged its largest one-day fall since 1998.

Russia has raised the key rate a total of 11.5 percentage points this year amid market turmoil linked to the Ukrainecrisis, and such a high rate will likely further choke economic growth.

“This decision is aimed at limiting substantially increased rouble depreciation risks and inflation risks,” the central bank said in a statement.

The outlook for Russia’s economy has darkened considerably since the summer as capital flight has soared due to broad-based risk aversion to Russian assets and sanctions restricting Russian companies’ access to international capital markets.

That poses a major challenge for President Vladimir Putin, whose popularity, based partly on providing stability and prosperity, is at risk from the rouble’s decline, which is damaging Russia’s credibility among investors.

The central bank early on Tuesday also increased the maximum volume of foreign currency it provides to Russian banks via its foreign-exchange repurchase agreement auctions for 28 days to $5 billion from $1.5 billion.

It said that in order to strengthen the efficiency of monetary policy, loans secured by non-marketable assets or guarantees for two to 549 days would be provided at a floating interest rate.

The central bank now says the economy is likely to contract in annual terms early next year and that it could shrink by around 4.5 percent in 2015 as a whole if oil prices average $60 a barrel.

Russia’s economy still depends in large measure on sales of oil and gas, which account for about two-thirds of exports, despite liberal policymakers calling for structural economic reform for years.

That means swings in global oil prices have a significant impact on Russia’s balance of payments, and therefore the rouble exchange rate.

Former Finance Minister Alexei Kudrin wrote on Twitter on Tuesday that the rouble’s slide was also due to a lack of trust in the Russian government’s economic policies.

Investors took Tuesday’s rate hike as positive, saying it showed the central bank’s defence of the currency had teeth.

“This is definitely a step in the right direction. The real interest rate right now is significantly positive, 7 to 8 percent,” said Jorge Mariscal, chief investment officer for emerging markets at UBS Wealth Management in New York.

“This should make it more difficult to short (the rouble). I think it shows they are really concerned about the speed of the decline in the rouble.”