Where does the buck stop at McDonald’s? Look no further than the board. 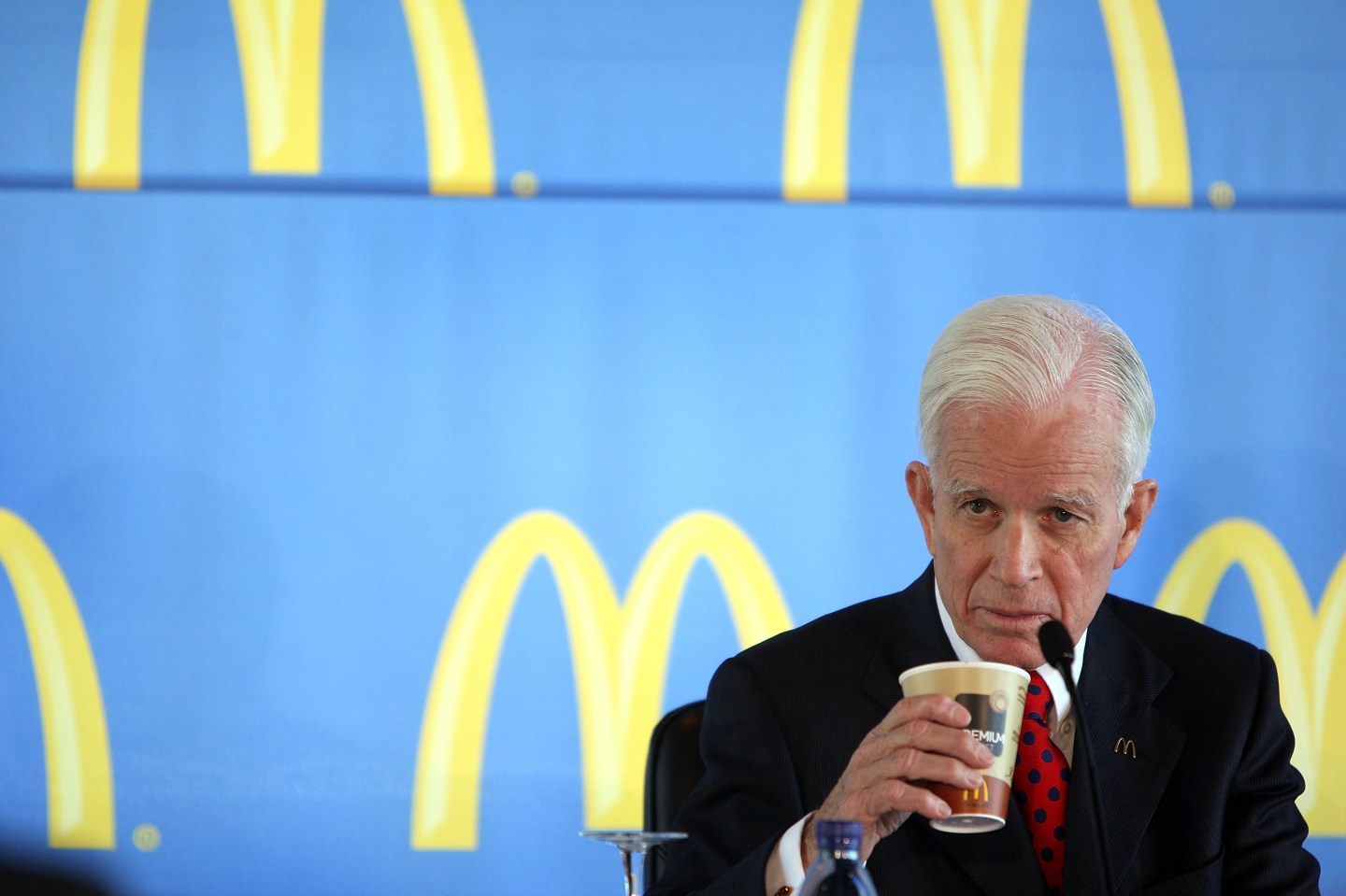 The heat on McDonald’s just got turned up a notch.

On Monday the company reported a 2.2% decline in global same store sales for the month of November, with the U.S. market taking the biggest hit (-4.6%). The Wall Street Journal reported that the drop in the U.S. was the biggest in more than 14 years.

I detailed McDonald’s woes last month, noting that the pressure was mounting on CEO Don Thompson to turn around the fast food giant. But with no relief in sight, investors may soon turn their attention to the McDonald’s board.

Leading the group is Andy McKenna, the company’s non-executive chairman since 2004 and a director since 1991. McKenna is a Chicago heavy hitter, who has been called “the power behind the throne” by the hometown press. Chicago Magazine has put him on its list of the 100 Most Powerful Chicagoans, describing him as “a bigwig other bigwigs seek out for advice.” He has chaired the White Sox and Cubs, and is now on the board of the Chicago Bears. He has also sat on countless other civic and corporate boards, including the University of Notre Dame and the Big Shoulders Fund of the Archdiocese of Chicago.

According to company filings, McKenna planned to leave the board in 2003 when he reached McDonald’s mandatory retirement age for directors of 73. But in the interim the company went through a CEO handoff, and the board asked McKenna to stay on to aid in the transition.

The following year McDonald’s loosened the retirement rule in its proxy, saying that the board “may nominate existing members of the board over the age of 73 as candidates in exceptional circumstances.” McDonald’s was then struck by misfortune in its leadership ranks. CEO Jim Cantalupo died of a heart attack while in the job. His successor, Charlie Bell, was then diagnosed with colon cancer and resigned.

By 2007, when two additional board members hit 73, the language about mandatory retirement had disappeared. McKenna has now overlapped with the tenures of six different McDonald’s CEOs.

As of the most recently filed proxy, three board members were over 73: McKenna (listed as 84), Walter Massey (76), and Roger Stone (79). MSCI ESG Research, which provides data on governance, found that the average age of a director at McDonald’s is about 63, the oldest in its peer group. Compare the figure with Burger King (about 50), Starbucks (about 58), and Yum Brands (about 59). McDonald’s directors also have a longer tenure (12 years) than those on other big restaurant company boards (eight years).

A similar spread can be found when one compares McDonald’s with an even bigger corporate universe, such as the S&P 500. Larry Fauver of the University of Tennessee’s Corporate Governance Center found that the average number of years served by a director at McDonald’s was 12.5 versus 9.5 for the broader index. “That’s a fairly significant difference,” he told me.

Why does this matter? In a few words: connection to the company’s customers. While octogenarian and late septuagenarian directors may have more seasoning and worldly experience than young Turks, there is an argument to be made that they may not be quite as in touch with the two demographic segments that McDonald’s really needs and is struggling to attract: millennials and young families. “That’s why you need a refreshed board,” says Charles Elson, director of the John L. Weinberg Center for Corporate Governance at the University of Delaware. “You need to take fresh looks.”

Fauver adds another concern: Board members who have been around that long may not have enough distance from management to be objective about the company’s performance and challenges. “How independent are you after 23 years?” Fauver asks.

I spoke with McDonald’s chair McKenna briefly for my November story, in which he told me that the board is “very supportive” of CEO Thompson. I also asked McKenna about the board and its tenure. He replied that that he didn’t think length of service had deprived any of the directors of their independence. McDonald’s did not respond to a request for comment in time for publication of this story.

In its proxy, the company notes that 12 of 13 of its directors are independent—Thompson being the exception. But there are a couple of interesting connections between the company’s directors that go beyond the McDonald’s boardroom:

–The vast majority of McDonald’s board members are based out of Chicago. (That’s not very geographically diverse for a truly global company.)

–According to the proxy, in 2013 Inter-Con Security Systems, whose CEO is McDonald’s director Enrique Hernandez, provided physical security systems for the company’s home office campus. McDonald’s payments to Inter-Con totaled $1.3 million (less than 1% of Inter-Con’s revenue).

–Directors Roger Stone and McKenna at one time both ran companies that were suppliers to McDonald’s, even as they sat on McDonald’s board of directors.

–McDonald’s CEO Don Thompson was a director of the utility company Exelon from 2007 to 2013, overlapping with McDonald’s director and Ariel Investments CEO John Rogers. Rogers is a current Exelon director who joined the board in 2000. Exelon’s proxy notes that McDonald’s is a customer, paying Exelon $14 million in 2013.

–McKenna served as Aon’s longest-tenured director, stepping down in 2012 after more than 40 years. McDonald’s director Rogers joined the Aon board in 1993, serving also until 2012. Rogers has been on the McDonald’s board since 2003.

Corporate governance expert Nell Minow notes that Chicago has historically had more inbred boards than other cities, and she believes that may very well still be the case. “What you see at McDonald’s is what we expect from boards circa 1990, not circa 2014,” she says. “It’s like McDonald’s hasn’t gotten the message that most boards have about how important it is that you demonstrate a very clear picture of independence to the shareholder community.”

Elson of the University of Delaware says that the closer directors get outside of the board room, the more concerning it is. These relationships have the potential to introduce elements into the mix that might make it hard to be objective. He adds, “Any time you see significant length of tenure and interrelationships between directors, it raises questions of effectiveness.”