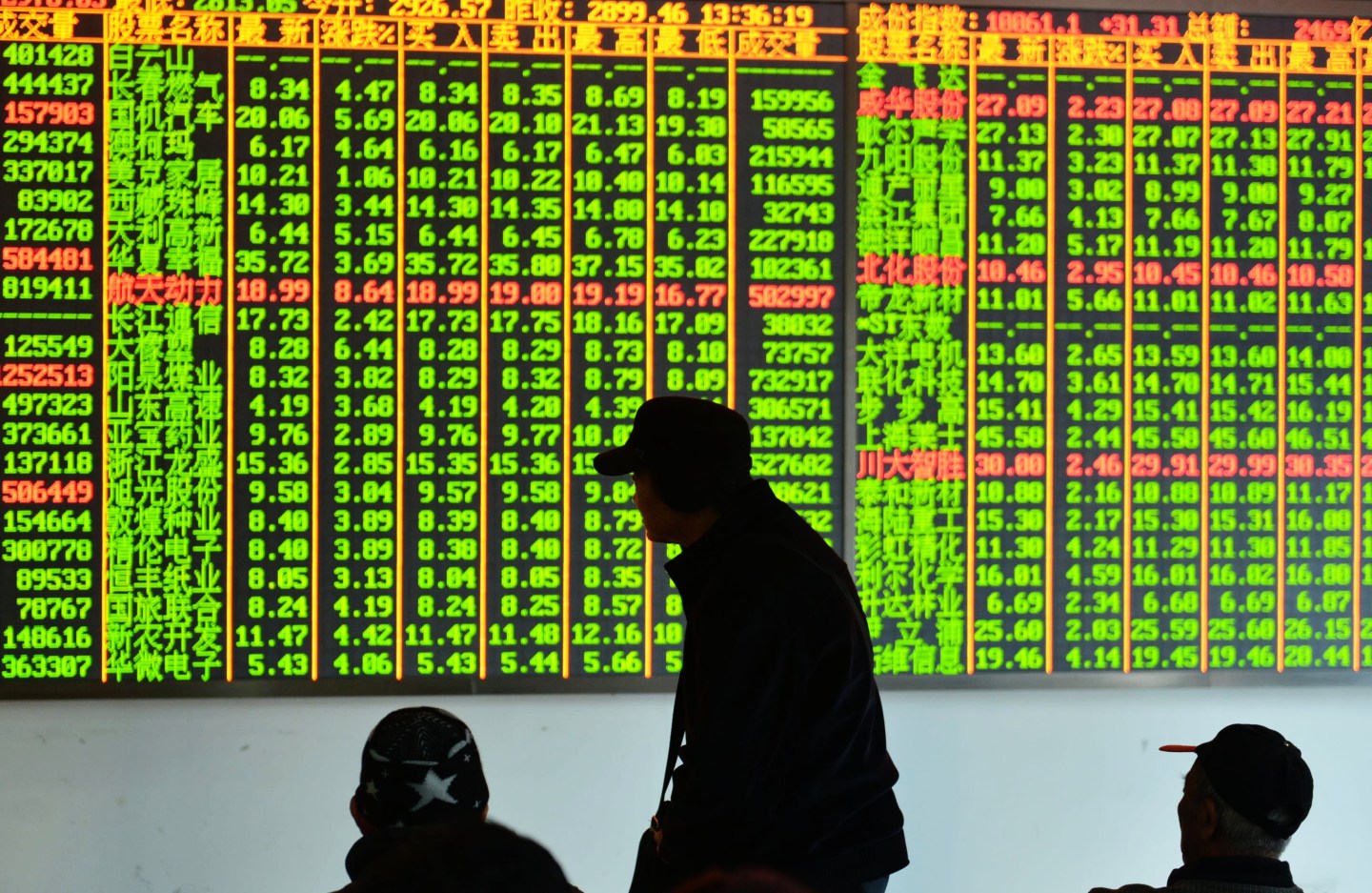 Surely this has to end in tears, doesn’t it?

China’s stock market is not so much defying gravity as defying logic, after a dizzying 32% rally since the end of October. That’s despite increasing evidence of stress in the financial sector and a slowing economy, the latter underlined again Monday by some shockingly weak trade data.

The Shanghai Composite index rose another 2.9% Monday to close above 3,000 for the first time since early 2010. It had risen 9.5% last week alone, in a week that ended with a spokesman for China’s equivalent of the SEC pleading at a press conference for investors to “respect the market, fear the market and…not blindly follow the trend of speculation.”

Just to recap: China’s economy is growing at its slowest rate since 2009. Although officials statistics and government pronouncements suggest it’s still above 7% year-on-year, house prices are falling in every major city across the country, bad loans in the banking system are rising at their fastest rate in years, and the central bank has had to intervene on more than one occasion in the last month to keep a febrile domestic money market stable.

For those people (who, until recently, included premier Li Keqiang) who don’t entirely trust the official GDP data, hard indicators such as rail shipments and electricity consumption are also on a trend that is at best flatlining. HSBC/Markit’s purchasing managers index suggests manufacturing output and employment both fell in November.

The usual counter-argument to such bearishness is that China is re-focusing its economy on services, which are less energy-intensive and have no real correlation to rail cargoes. And it’s true that HSBC/Markit’s Services PMI was still at 53.0 in November, suggesting a decent clip of growth (even if that too was the slowest rate since May).

But figures released Monday showed that imports were down 6.7% on the year in November, way below forecasts of a 3.5% increase. Even if much of that was due to lower prices for commodities from oil to iron ore, the figures hardly suggest surging domestic demand.

Alistair Winter, chief economist at London-based asset manager Daniel Stewart & Co, says there’s “a disconnect between the manic surge and equities since July and increasingly gloomy official as well as unofficial warnings on economic fundamentals.” Most of the latest surge, he reckons, is a hot-money inflow based on the pretext of “a very modest interest rate cut (last month) with more loosening to come” by a central bank that is fretting about how to unwind a debt-fueled bubble in real estate.

This wouldn’t be the first time that a stock market had got ahead of reality by anticipating supportive policy action. And it’s worth remembering that Shanghai stocks have gone nowhere fast in the last four years after having the pre-crisis froth knocked off them.

In theory, the much-touted link between the Hong Kong and Shanghai Stock Exchanges, which went live in November, could explain the surge in Shanghai, as foreign institutional investors pile into a mainland market that was previously off-limits. Unfortunately, the data suggest that flows from Hong Kong are running at barely a quarter of the daily maximum permitted.

The real reason for the Shanghai rally is more alarming: like the real estate boom, it has been driven by borrowed money. According to the Shanghai Stock Exchange, daily purchases on margin are running at between eight and 10 times the levels seen only five months ago.

And this is happening when China’s financial system is throwing up red flags aplenty elsewhere: deposits in the banking system fell for the first time since the 1990s in the third quarter, pressuring the People’s Bank of China into a partial liberalization of deposit rates in November.

Another red flag is that the government finally pushed the button on its plan to insure bank deposits at the end of November. Previously, people had just assumed that the state would bail out any significant bank that got into trouble. Having a deposit insurance scheme is one way of saying you think you can keep bank failures orderly.

Increasingly, there is a sense that the day when China gets presented the bill for years of wasteful ‘investment’ is drawing closer. A recent study by two economists affiliated with the Chinese National Development and Reform Commission suggested that $6.8 trillion had been wasted just since the massive post-crisis fiscal stimulus package in 2009.

It seems a question of when rather than whether the first shoe will fall. Gabriel Sterne and Alessandro Theiss of Oxford Economics argued in a post last week that the inconsistency between low official rates of non-performing loans and a massive expansion of private debt in the last five years (over 100% of GDP, according to PBoC data) cannot be sustained.

Already, the stock market is valuing the major Chinese banks’ equity at as much as 30% below what the banks’ books say it is worth. And they’re supposed to the country’s strongest institutions, with the greatest likelihood of state support.

If this sounds familiar, it should. It’s barely years since the U.S. and Europe were in this position. You remember how that one went.