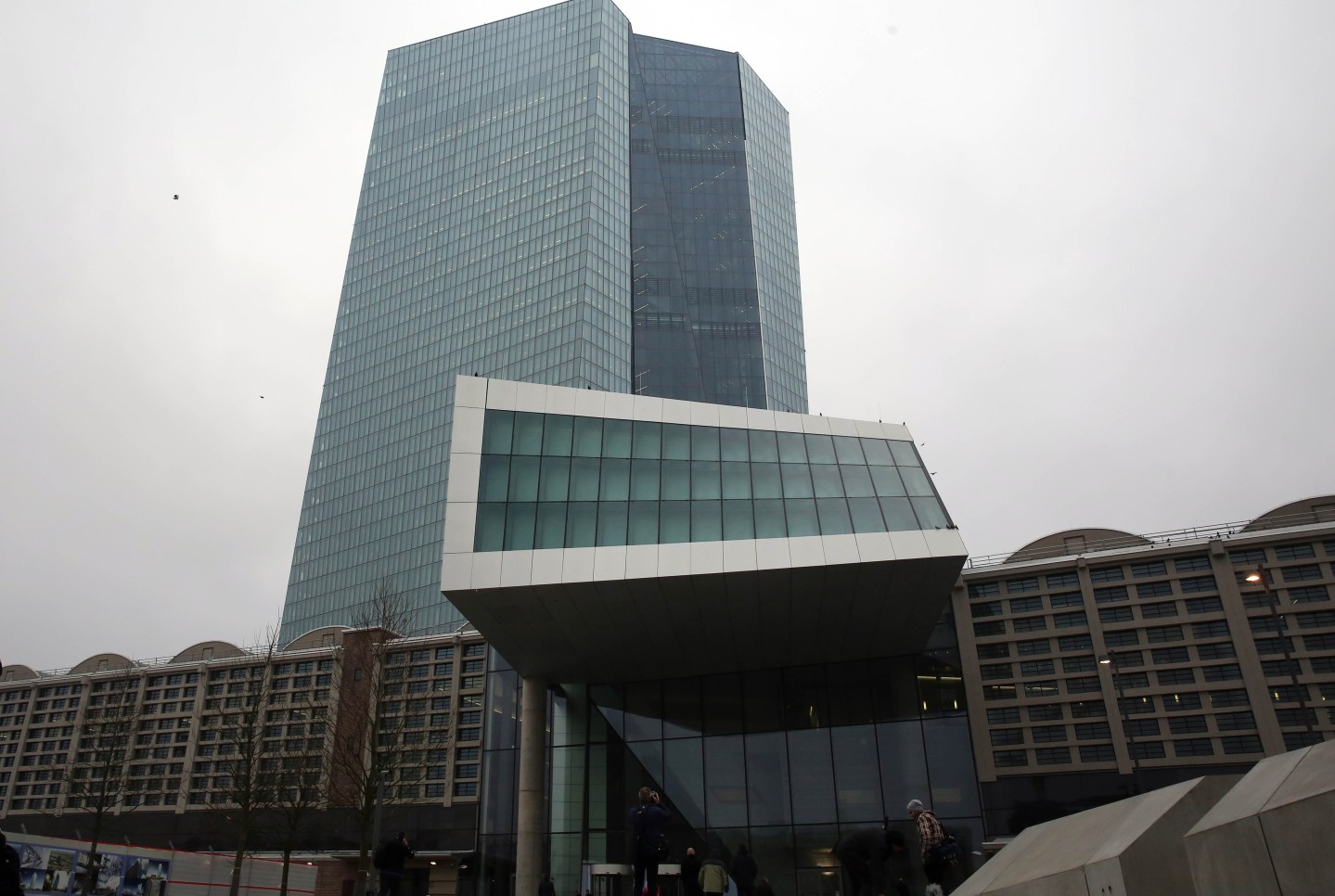 The European Central Bank sat on its hands again Thursday at its last meeting of 2014, unsurprisingly in view of the fact that its official interest rates are already “at the lower bound”, as the economists say (0.1% for the key refinancing rate, -0.15% for the deposit rate). Rates being a dead letter, the discussion at President Mario Draghi’s press conference naturally revolved around why the ECB didn’t expand its bond purchasing programs, and how it sees the sharp drop in oil prices playing out in the Eurozone. Here’s what we learned.

1. There is trouble brewing over Quantitative Easing. That’s a problem because, with rates already effectively at zero, the only way the E.C.B. can support the economy more is by buying bonds and driving down interest rates. Draghi and a “big majority” of the council say they “intend” to expand the E.C.B.’s balance sheet by around 50% to €3 trillion, roughly where it was three years ago. But he admitted there was no unanimity on that “intention” (which in E.C.B.-inside-baseball-speak is firmer than an “expectation” but not as firm as a “target”). At least the two Germans on the 23-person council–and probably allies like board member Yves Mersch–oppose that language. That means internal arguments will check Draghi’s impulse to do more…

2. …even as further stimulus becomes more and more necessary. The E.C.B. sharply cut its growth forecasts for this year and 2015-16. It now sees G.D.P. rising only 1% in 2015 and 1.6% in 2016 (from estimates of 1.6% and 1.9%, respectively in September). It also said it will miss its medium-term inflation target of just under 2% by more than expected. Inflation is now seen at 0.7% next year and 1.3% in 2016. That’s not exactly deflation, but it’s too low. With nominal rates at zero and the inflation rate falling, “real” interest rates (adjusted for inflation) are rising. As Draghi said – that’s not what the E.C.B. wants at all.

3. The new forecasts don’t even include the collapse in oil prices since last week! The cut-off date was Nov. 13, well before the Organization of Petroleum Exporting Countries pulled the rug out from under the oil market. Prices have fallen another $10 a barrel since then. But don’t expect the E.C.B. to react to a dip in headline CPI because of oil effects: Draghi was clear that the fall is “unambiguously positive” for the Eurozone, as lower fuel prices leave consumers more disposable income. But he’s afraid that employers will use that development to justify giving lower pay rises, which would drive the CPI even lower, and that’s a no-no.

4. The fiscal cavalry isn’t coming. Draghi has pleaded since the summer for those countries that can afford it (i.e. Germany) to use fiscal policy to stimulate the economy. Unfortunately, Germany is too proud of running a balanced budget this year to oblige him, and economists are in any case doubtful of how much that would actually do to bring about much more pressing growth-friendly reform in countries such as France and Italy. The E.U., which has a minimal budget of its own, unveiled a plan earlier this week that it hoped would stimulate €300 billion of investment in infrastructure and the like. It’s been dismissed as wildly optimistic, but as Draghi wistfully observed, “It’s the only instrument we have” on the fiscal side.

5. Things will come to a head early in 2015. The E.C.B. does its best to leave at least three months between its major policy actions. It knows that the effects of monetary policy on the real economy take time (as opposed to the the immediate sugar-rush it gives financial markets). “Just like it took the Titanic time to turn,” you might say, but that’s what all the research confirms. The doves on the council will need at least another month to convince the hawks of the need to break that last taboo and buy government bonds in large scale. They might have to wait for the next set of official forecasts in March make their argument irresistible. Draghi said they don’t have to wait for unanimity to make that decision, but pressing ahead without German support risks a whole new existential row over the future of the euro, maybe even lawsuits in Germany’s constitutional court supported by the Bundesbank and, in short, a whole new iteration of the euro crisis.