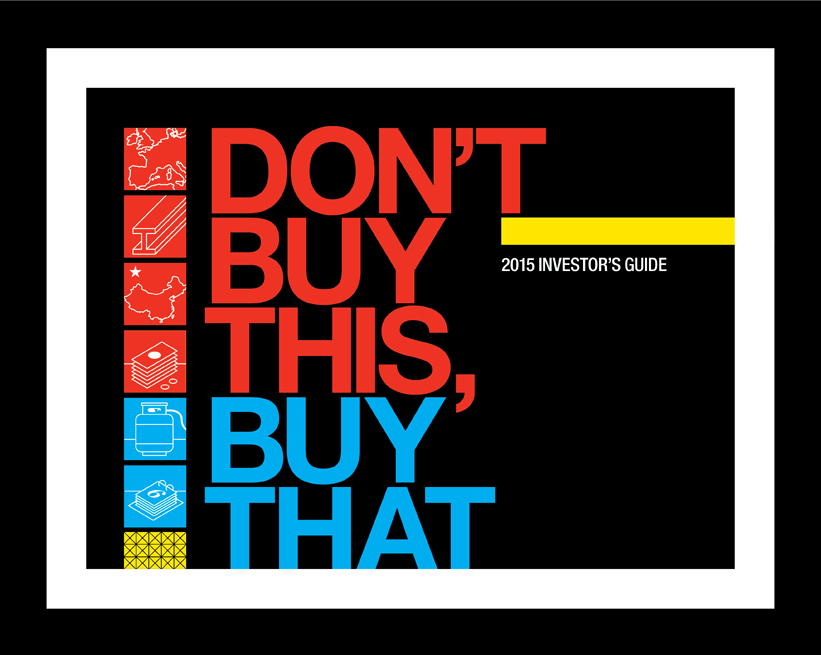 DON’T BUY REITs
Real estate investment trusts have bondlike qualities: They pay out their profits as dividends, and the latter tend to be predictable because they’re based on long-term leases. They often thrive when interest rates are low because their rates outpace those of bonds. But by the same token, REITs often slump when interest rates rise. “REITs have performed better than expected because interest rates have not gone up the way that was predicted,” says Michael Cuggino, manager of the $7 billion multi-asset Permanent Portfolio Fund. “But going forward in the new year, it’s a tough one.”

At the same time, as the U.S. economy begins to look rosier, some investors think it’s a good moment to buy certain real estate stocks that don’t behave like REITs before they ­really start to boom again. For example, David Rainey, co-manager of the top-performing $1.5 billion Hennessy Focus Fund, recently bought shares of Brookfield Asset Management (BAM), which owns a real estate portfolio ranging from office buildings to energy infrastructure to timberlands but is not structured as a REIT. Marty Sass, whose firm M.D. Sass manages $7 billion, contends that the best opportunity is in sales of existing homes, which outnumber new-home sales 11-fold. Leading residential brokerage ­Realogy (RLGY) is “the ideal play,” Sass says. Realogy earns fat margins from its large franchise business—it owns broker chains Coldwell Banker, Corcoran, Century 21, and Sotheby’s International Realty—but the stock trades at just 14.5 trailing earnings. Sass thinks it is undervalued simply because most investors have never heard of the parent company. But its brands, he says, “are the best in the business.”

DON’T BUY UTILITIES
Dividend-seeking investors have surged into utility stocks in the past couple of years for their high dividends, but they might soon be jolted: All that buying energized valuations; the category now trades at 17.2 times trailing earnings, above its historical median of 14.8. Shares of electricity and gas providers also tend to short-circuit when interest rates rise, says the Leuthold Group’s Doug Ramsey, since they often have lots of debt. If rates rise over the next year, as is expected now that the Fed has stopped its stimulus program, “utilities won’t be as defensive as people think,” says Koesterich, who recommends underweighting the sector.

DO BUY U.S. INDUSTRIALS
Industrial stocks also pay hefty dividends. And their valuations are, at 18.4, barely above their historical 18.0 median. More important, industrials are expected to pump their earnings up 10% next year—five times what utilities will deliver. “I like industrials, because if orange is the new black, industrials are the new technology,” says John Stoltzfus, chief market strategist for Oppenheimer. He’s optimistic about everything in the sector, from defense products to equipment related to wind, water, and natural gas. Oppenheimer has an outperform rating on Honeywell International (HON), which yields 2.1%, and Emerson Electric (EMR) (2.9%), both of which should sell more as consumers buy and heat more homes and manufacturing picks up. He’s also bullish on General Dynamics (GD) as both an industrial and a defense play, and UPS (UPS), which will benefit as people continue to buy more stuff online. “There’s a certain level of comfort in owning them, and they offer plenty of opportunities,” Stoltzfus says. “And as economic growth becomes more clear, the markets will recognize these companies.” Robert Zagunis, who won’t buy a stock for his $5.5 billion ­Jensen Quality Growth Fund unless it has posted at least 15% returns on equity for 10 years straight, is placing his greatest weighting in industrials, including 3M (MMM) and United Technologies (UTX), which have exposure to both emerging and U.S. markets. He cites the fact that 3M has upped its dividend every year for a half-century (it now yields 2.2%) and that revenues in its China business are steadily ascending. “People might hear 3M and think big, stodgy kind of company,” Zagunis says, “but it continues to have double-digit net margins.”