Hong Kong leaders released without charge after trying to surrender 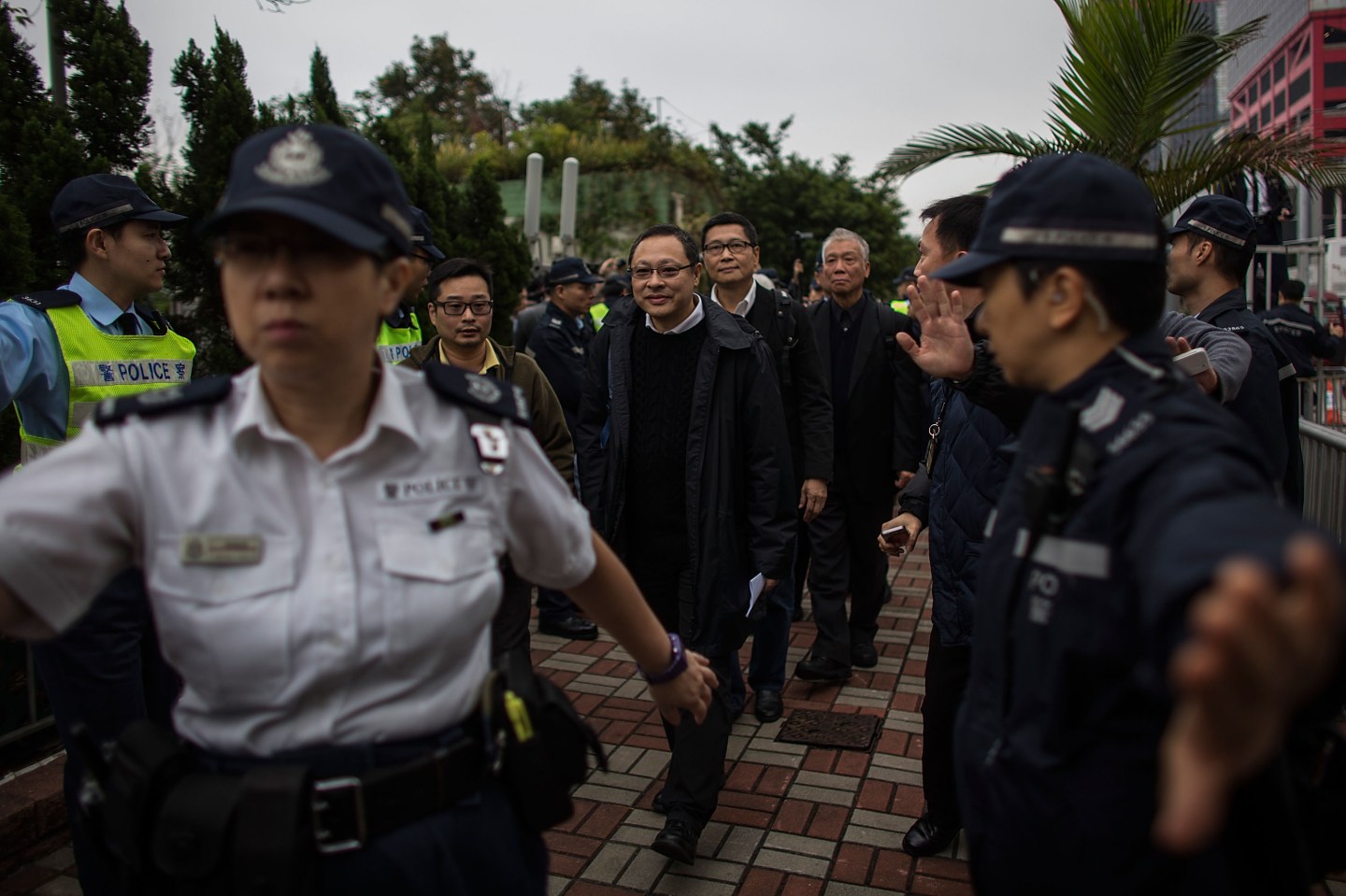 HONG KONG - DECEMBER 03: Benny Tai Yiu-ting, Chan Kin-man, Reverend Chu yiu-ming, (L-R) the three co-founders of Occupy Central movement, surrender themselves in to the police on December 3, 2014 in Hong Kong. Organisers dished out forms to the group to fill informing police the dates which they have taken part in events in Causeway Bay, Mong Kok and Admiralty. (Photo by Lam Yik Fei/Getty Images)
Photograph by Lam Yik Fei — Getty Images

Police turned away the founders of a leading pro-democracy group in Hong Kong who attempted to surrender on Wednesday for their role in organizing the ongoing street sit-ins for free elections here.

They were joined in seeking arrest by several other high-profile supporters of the movement, including the Catholic Cardinal Joseph Zen Ze-kiun, who also walked in, and then out, of the police station.

“We are not being arrested,” said Tai, speaking to press outside the station. He added, though, that he believed police might still arrest him and others at a later stage and charge them with more serious crimes.

Chan originally told TIME that they planned to end the protests on Oct. 1, but weeks later the occupation of downtown areas continues, fueled by student groups who disagree with Occupy Central on both timing and tactics.

The group also quickly found that it was also not able to control the location of the protests, after students occupied the Admiralty district (location of the Central Government Offices), the shopping hub of Causeway Bay and the blue-collar Mong Kok quarter of Kowloon, instead of the Central location originally stipulated.

Though the group supported the sit-ins, and continued to lend the name Occupy Central to the protests, its leaders were an increasingly infrequent presence in the occupied areas, as they ceded control over the direction of the movement to two student groups, Hong Kong Federation of Students and Scholarism.

In recent weeks, the trio has joined some other initial supporters of the sit-ins in deciding that it is time for the occupations to end, especially after the police began to use greater force.

“For the sake of the occupiers’ safety, for the sake of the original intention of love and peace … we three urge the students to retreat,” read a statement from the group after violent clashes Sunday. It added: “We respect the students’ and citizens’ determination to fight for democracy, and we are furious at the government’s heartless indifference.”

Calling the movement for free elections in Hong Kong “a long-term struggle,” the trio encouraged students to “recuperate and build up strength.” The movement, they said, could continue through other means, including efforts to “extend [its] spirit” by reaching out to local communities.

Speaking outside the police station, Tai told TIME that his next move depended on “what happens with the occupation.” For now, he said he was going home. “I have some things I need to finish writing,” he said.

Though the Occupy Central founders said they hoped to “bear the legal consequences” on the students’ behalf, an unnamed police source told the South China Morning Post that the trio are among some 200 people identified for investigation over the pro-democracy movement.

Scores of protesters have already been arrested for their roles in more than 10 weeks of protests. Police said that 40 people were arrested during the Sunday night confrontations in Admiralty district, while 12 others were arrested that night in parallel demonstrations across Victoria Harbour in Mong Kok.

Joshua Wong, a student protest leader who features in TIME’s Person of the Year poll, was charged last week with obstructing public officials clearing the restive Mong Kok site. He is out on bail and, along with two other young protesters, began a hunger strike on Monday to press the government for the right to free elections in Hong Kong.

Hong Kong’s Chief Executive Leung Chun-ying has replied that he wishes the students good health, but that “any resistance is futile.