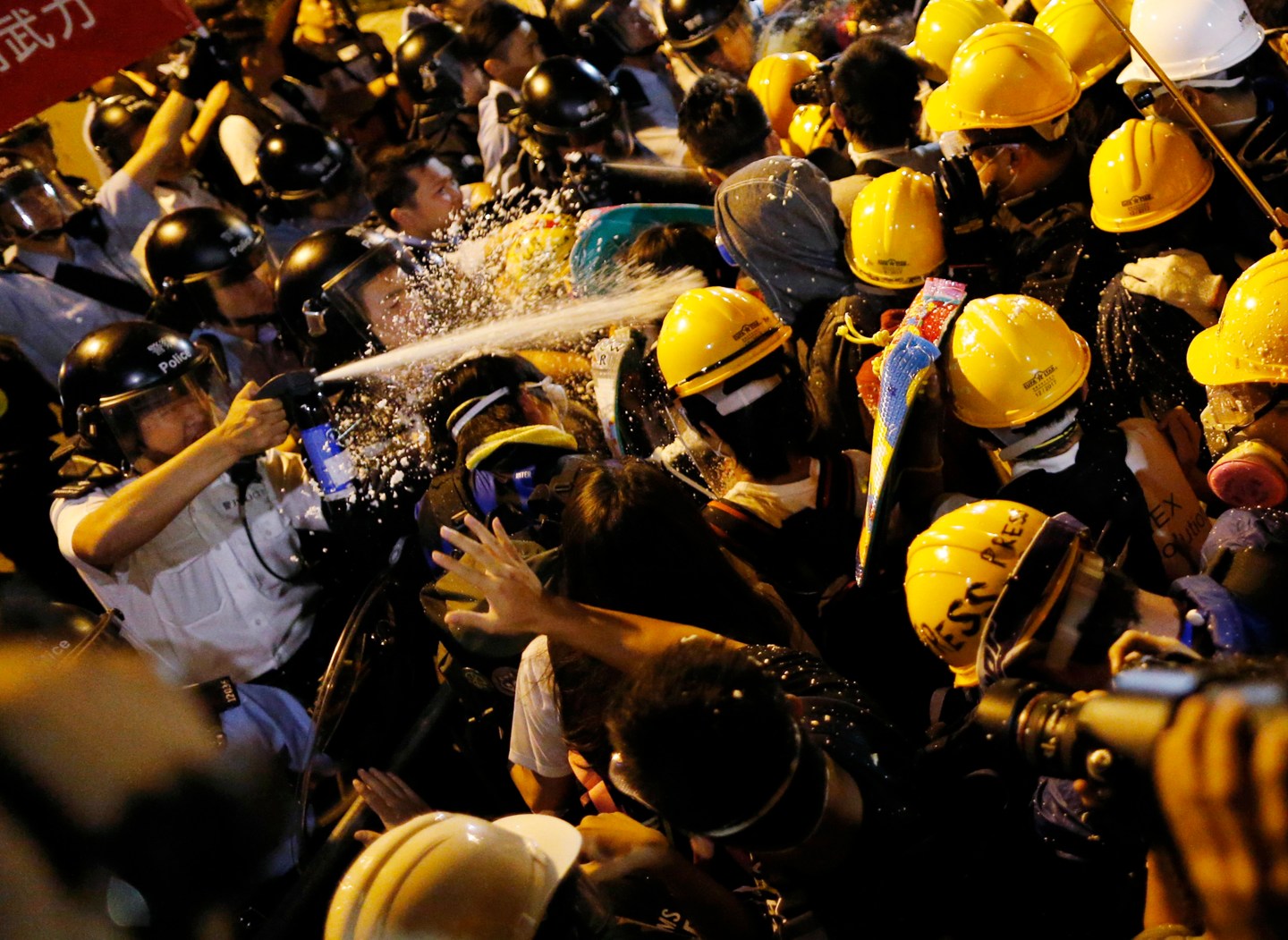 Police use pepper spray during clashes with pro-democracy protesters close to the chief executive office in Hong Kong, November 30, 2014. Student activist groups have called for an escalation of the protests in Admiralty. Thousands of police on standby, according to the South China Morning Post. REUTERS/Tyrone Siu (CHINA - Tags: POLITICS CIVIL UNREST TPX IMAGES OF THE DAY) - RTR4G4N8
Photograph by Tyrone Siu — Reuters

Thousands of protesters clashed with police overnight at the demonstration’s main encampment near government headquarters in well-heeled Admiralty district, at one point storming into a main thoroughfare and bringing evening traffic to a sudden stop. Police in riot gear fought back with a liberal use of batons and pepper spray, hurling protesters to the ground to make arrests. At least 40 people were hospitalized in the bedlam.

The night marked a major reversal in direction for what student leaders have long maintained was a movement principled in nonviolence. Student groups, who bristle at the Chinese government’s insistence on vetting candidates for Hong Kong’s top political leader, have urged protesters to show their readiness for the right to free elections by exercising restraint.

But months of waiting in the streets for an increasingly unlikely turnaround from either Beijing or the Hong Kong government, as well as seething anger at perceived police brutality, appear to have sharpened protesters’ ambitions.

“I think we’ve had enough,” said Doug Lee, 20, a musician, on Monday morning. “I’m ready to fight, ready to protect our people, ready for revolution.”

Speaking over a megaphone on Sunday night, two of the student leaders, Nathan Law and Oscar Lai, called for assembled protesters to surround the government offices and prevent employees from getting to work in the morning. Yet leaders gave little direction as to what should happen in the hours between their speeches and the start of the new working week.

“There is no plan,” said one protester, first-named Danny, as he stood at one entry to the headquarters. The 20-year-old insisted, though, that he at least knew that protesters would not charge at police and would remain peaceful.

Yet just minutes later, a group of protesters in helmets, goggles and face masks counted down and charged at police lines near Tamar Park, a swath of green hemmed by skyscrapers and lights wishing “Seasons greetings” to this freewheeling metropolis of 7 million. A second group of demonstrators charged at police blocking access to nearby Lung Wo Road, and protesters surged while cheering and clapping into the key thoroughfare.

Pro-democracy protesters gather as police attempt to clear a demonstration site near the officer of the Chief Executive in Hong Kong.Photograph by Tyrone Siu — Reuters

Umbrellas were passed hand to hand toward the front line as protesters, reeling from pepper spray and bloodied by batons, were hurried out of the crowd and passed to medics. Protesters linked hands to surround wounded demonstrators and form the most makeshift of hospitals on the grass. One volunteer medic, Shane Lee, 21, said that he had treated at least 30 people overnight, including four head wounds and an arm fracture.

As the confrontations intensified, with police forcing protesters out of Lung Wo Road overnight, government employees were told they did not have to report to work.

By morning, intermittent clashes between protesters and police continued, with protesters showing a visible anger not seen before at a camp where protesters spend most of their time tapping at smartphones, studying, and passing around cakes and noddle dishes. In some instances, protesters threw water bottles at cops and raised middle fingers amid raucous jeers.

Police also heckled protesters, tearing down their banners calling for real democracy, and it at times became unclear who was aggressing on whom. Police say they made 40 arrests overnight.

Police officers beat up protesters as they try to disperse them outside government headquarters in Hong Kong.Photograph by Vincent Yu — AP

“Why would Hong Kong police do that?” said one man, surnamed Tam, a 30-year-old hairdresser who told TIME he had been hit several times with a baton.

Protesters in Admiralty district had over the past few weeks entered a period of reckoning after Hong Kong’s political leaders had shut down any possibility of future talks with student groups. Student leaders’ plans to take their demands to Beijing ended at Hong Kong’s airport, when the Chinese government revoked their permits to visit mainland China. Meanwhile, polls put public support for the street occupations on the decline.

Questions about the future of the movement became all the more potent when police acted on an injunction brought by transport companies frustrated by the traffic disruption and cleared a virulent satellite protest site across the iconic Victoria Harbor in Kowloon’s raffish Mong Kok district.

Joshua Wong, a student protest leader, defended the evening of tumult in a Facebook post, saying that “students [were] forced to take this step,” after all other options were exhausted and after weathering months of police violence. Seven cops were arrested last week for the alleged beating of a protester during an earlier attempt to occupy Lung Wo Road, and local journalist groups have filed complaints at police headquarters over the violent arrest of two reporters covering protests in Mong Kok. Protesters have on recent nights convened in the neighborhood to — they insist — “go shopping” or wait for a bus, bringing traffic to an almost comic standstill as police chaff at protesters “cross[ing] the roads” slowly.

“Students occupy peacefully, but are faced with police violence,” wrote Wong, who has accused police of assaulting him, including punching him and touching his groin, during his arrest in Mong Kok earlier this week.

Hong Kong Secretary for Security Lai Tung-kwok denied the police used excessive force. “Batons and bricks were found in the bags of the protesters,” he told reporters.

Lam Cheuk-ting, chief executive of the Democratic Party, said that student leaders had not discussed their plans to surround government headquarters with either the pro-democratic legislators or the leaders of Occupy Central, the group that originally called for pro-democracy sit-ins here but later ceded the face of the protests to two student groups.

“I understand why they don’t retreat because the government hasn’t responded to our demands, any of the demands,” he tells TIME. “But we all know that if the deadlock continues we will gradually lose support from the public.”

On Monday morning, as the tumult eased into a tense calm, protesters were determined to keep fighting, yet uncertain where it would get them.

Meanwhile, a group of British MPs have been refused access to Hong Kong where they intended to investigate the relationship the U.K. has with its former colony. British nationals do not normally need visas for Hong Kong, which has enjoyed significant autonomy from Beijing under a principle of “one country, two systems” since it was handed back to China in 1997.

Richard Ottaway, who chairs the Foreign Affairs Committee, accused Beijing authorities of acting in an “overtly confrontational manner.” Such accusations are becoming all too common as this battle for Hong Kong’s future builds to an indecorous crescendo.