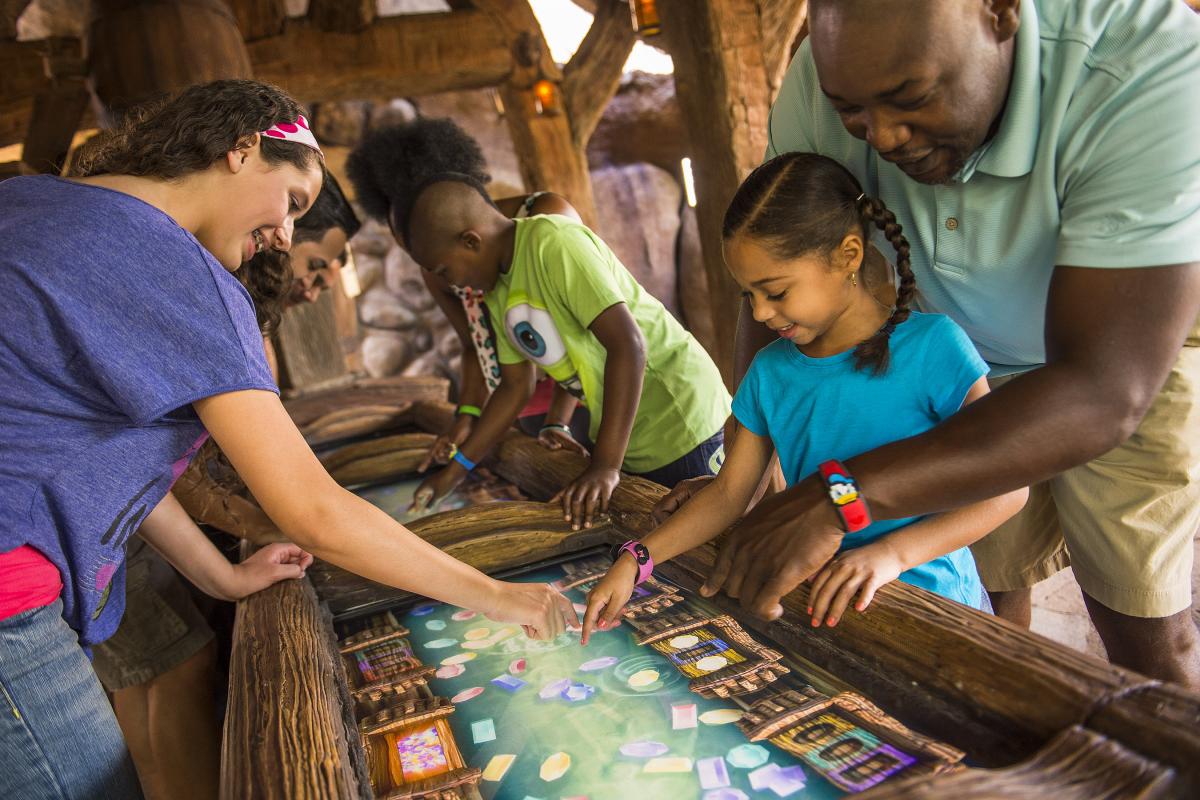 These days, guests to theme parks around the country don’t want to take a vacation from video games. With the proliferation of smartphones and casual gaming, over 59% of Americans now play some type of games. At the same time, more theme park creatives who are building the next generation of attractions are either from the game development world or have grown up with a game controller in their hand. This shift is having a profound impact on the interactive experiences that have recently opened at the largest theme parks or will be coming soon.

“What’s great about gaming today is that everyone plays,” said Jonathan Ackley, project producer and creative director, Walt Disney Imagineering (DIS). “It used to be nerds like me, sitting at my desk in the dark. I’m happy, because nerds are finally somewhat cool, if not really cool.”

Ackley’s not just any old nerd. Older gamers may be familiar with Ackley’s early work, if not his name. He started off as a programmer at LucasArts on PC adventure games such as Day of the Tentacle, Sam & Max Hit the Road, and Full Throttle before producing and designing The Curse of Monkey Island back in 1997. Now he’s created several real-life RPGs (role-playing games) in EPCOT and the Magic Kingdom at the Walt Disney World Resort in Orlando, Fla.

Disney Phineas & Ferb: Agent P’s World Showcase Adventure lets guests partner with characters from the hit animated TV series via a clamshell video phone and interact with physical elements hidden in plain sight within the different county pavilions at EPCOT to take down Dr. Doofenshmirtz. Sorcerers of the Magic Kingdom takes things a step further by introducing interactive collectible battle cards with the ability to cast spells via motion sensor technology to the experience, which features an original interactive animated story. Ackley was influenced by collectible card games and video games like Magic: The Gathering and Pokemon.

“We have the concept of character leveling, which is very much a role-playing game concept,” explained Ackley. “The longer you play, the more powerful you become.”

Both of these experiences were created before Walt Disney Parks & Resorts converted all of its Orlando theme parks, stores, restaurants and hotels with RFID technology that allows a single MagicBand (powered by a passive HFRFID chip) to interact with attractions in new ways. These wrist bands store items like a guest’s hotel key, credit card info and FastPass access to allow for a more seamless experience inside of the parks. Moving forward, they will open up new ways for Walt Disney Imagineers to connect with guests as well as their smartphones.

“We’ve already experimented with the ability to let our guests opt into activities like Sorcerers of the Magic Kingdom and take on even deeper story roles for immersive experiences,” said Tom Staggs, chairman of Walt Disney Parks & Resorts. “This is Gen 1 of MagicBand technology and we’re just at the beginning of how to take advantage of this opportunity with our Imagineering teams. Some of the things we’re installing down the road will incorporate this technology, and it’s already an integral part of our design process for our guests to connect the virtual and physical worlds we’re creating.”

Staggs said the ability for gamers to use the MagicBand to unlock exclusive content in the Disney Infinity video games is just scratching the surface of what will be done in the near future. Even outside of MagicBand technology, video games are infiltrating attractions like the Magic Kingdom’s recently opened Seven Dwarfs Mine Train at the center of Fantasyland. Ackley worked with executive producer Jon Georges and other creatives to build a Bejeweled-style Match 3 game into the queue for the hybrid family coaster and dark ride. Touch-screen HD monitors were installed in the 15-foot long wooden troughs so guests can partake in multiplayer gaming as they wait in line.

“We know that guests are big fans of video games, so we’re always looking at ways to bring that level of interactivity into our parks,” said Georges. “While we are not in the video game business, we know that guests now bring a level of expectation about how to interact with our characters and stories.”

Across the country in Anaheim, Calif., Walt Disney Imagineering Research and Development has taken advantage of the fact that the majority of guests now carry smartphones with them into the Disneyland Resort. Former Ultima 9 video game developer Seth Mendelsohn spearheaded the team that created the new Mickey’s Fun Wheel Challenge at Disney California Adventure. The mobile game is free to play and doesn’t require a download because of in-park Wi-Fi. Mendolsohn said the head-up experience was designed to give guests something to do while waiting for the World of Color light show each evening. The game uses the 160-foot-tall Ferris wheel as a Simon Says device and the smartphone as the touchpad. The person with the highest score after three rounds gets to control the colors on the Ferris wheel.

“There’s a lot of learning that’s happened from games over the years,” said Mendelsohn. “Because everyone has been playing Angry Birds or Solitaire, people understand how to play games on their devices. It’s a natural transition to be able to come to the park and to use those skills and connect them up to physical attractions.”

Long before Walt Disney built Disneyland, Dutch toy maker Ole Kirk Kristiansen was making LEGO bricks in the 1940s. There are currently six LEGOLAND theme parks around the globe. Many kids (of all ages) have grown up playing with the colorful bricks as well as the bestselling video games from WB Games and developer TT Games, including the new LEGO Batman 3: Beyond Gotham. Both the California and Florida LEGOLAND theme parks have incorporated the long lineage of LEGO video games into their Imagination Zone and WB Games Zone, respectively. In addition to being able to build real structures with LEGOs and robots with LEGO MINDSTORMS EV3, video games on Xbox (MSFT) and other devices are playable. The parks also work with educators to use games, robotics and remote controlled cars to teach STEM (Science, Technology, Engineering and Math) topics to kids.

Taking interactivity to an actual ride, Knights’ Tournament allows guests to program their robotic arm-controlled ride with a fixed level of excitement that’s similar to a difficulty level in a video game. The giant robot arm then performs 360-degree spins, flips and other maneuvers to soar riders through the air. Legoland president and general manager John Jakobsen said LEGO’s values are all about letting the individual decide and influence his or her own experience.

“You can determine what you want to do,” said Jakobsen. “You’re not just being put into something and passively entertained. You have to make an active decision.”

Universal is blending new technology with big budget movies at its theme parks. Eric Hunt, creative producer on Harry Potter and the Escape from Gringotts at Universal Orlando Resort, said his team is influenced by more than just the movies that inspire the attractions.

“I’ve played the Electronic Arts (EA) Harry Potter video games and have seen how accurate they were in the references that were provided to them,” said Hunt. “Certainly there is a difference because we have to be more true to the films because guests are here on a daily basis looking at everything in its living state versus digital interpretations in 3D.”

At the new Wizarding World of Harry Potter Diagon Alley, Universal Creative has used 4K 3D technology for the Gringotts ride to introduce a new parallel story featuring a cast of actors from the blockbuster movie franchise.

“The brighter projector technology with the 4K and the better 3D technology with the improved optics provide really sharp imagery with no ghosting effect,” said Thierry Croup, senior vice president for Universal Creative. “It gives you much more depth and we have a much bigger screen that allows us to do edge blending, which is a special technology that allows us to use almost 360 screens that immerse you into the imagery.” Characters come to life not only on the ride, but in the queue as life-sized animatronic goblins work throughout the bank. Just next door at Gringotts Money Exhange, a goblin will answer any question that muggle guests ask.

A 50th Celebration Scavenger Hunt game mobile app can be played across all three SeaWorld [fortune stock-symbol=”SEAS”] parks. Guests collect badges as they visit locations throughout the park to earn rewards. Scott Helmstedter, Chief Creative Officer of SeaWorld Parks & Entertainment, said the company is working on similar games for the Busch Gardens parks to launch within the next year.

“Guests are already interacting with their smartphone throughout the day, so our goal was to focus on a device they are already familiar with and comfortable using,” said Helmstedter.

That comfort level with mobile devices and video games is changing the landscape of interactivity at theme parks today. Previews of what’s in store for tomorrow may just lie in your latest Xbox One, iPad or Samsung Galaxy 5 video game.