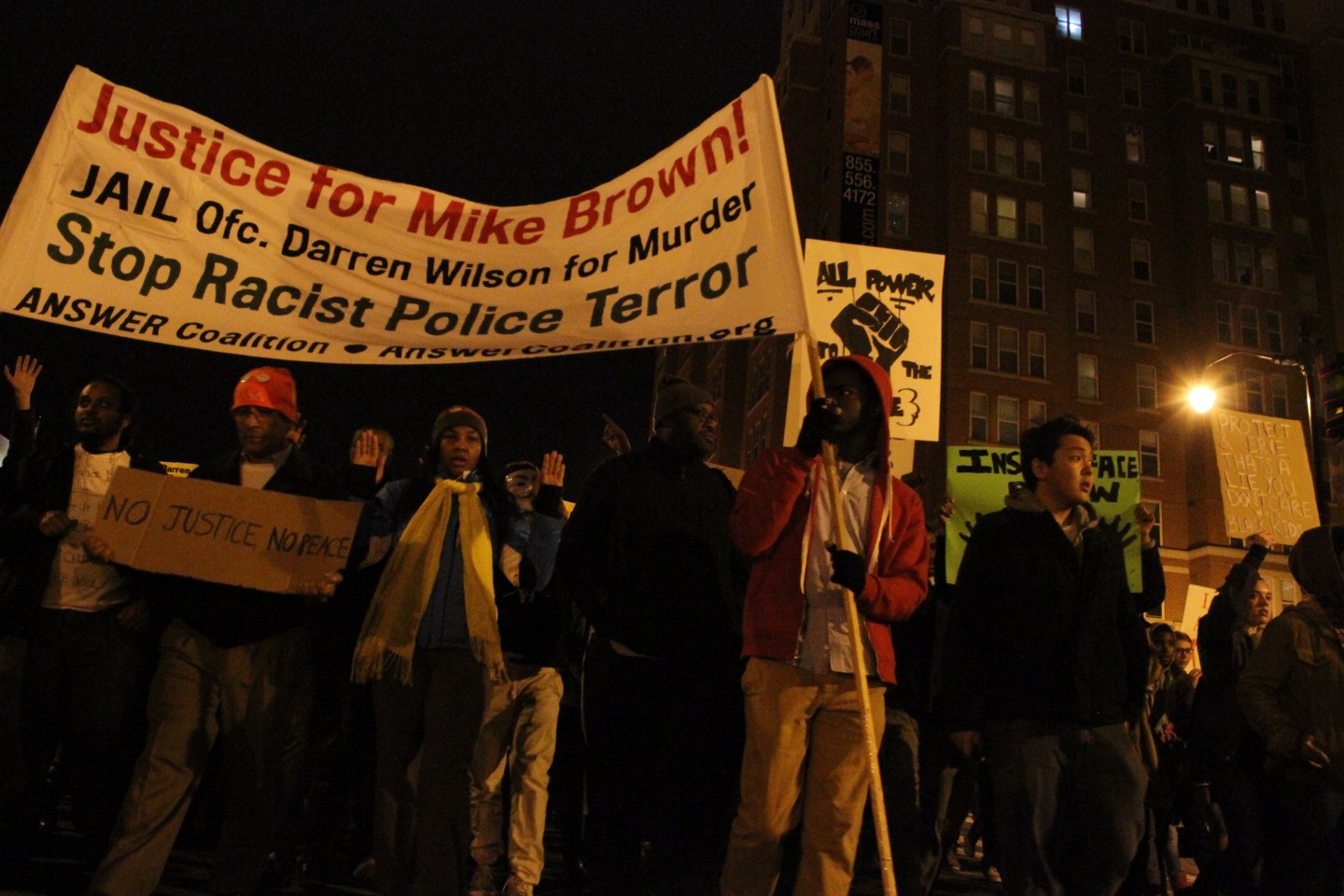 WASHINGTON, DC - NOVEMBER 25: Protesters hold banners during a march through the streets at the second night of protests after the Ferguson Grand Jury decision about white Officer Daren Wilson that he will not be faced with criminal charges for the shooting death of black 18-year old Michael Brown in Ferguson, on November 25, 2014 in Washington, United States. (Photo by Michael Hernandez/Anadolu Agency/Getty Images)
Photograph by Michael Hernandez — Anadolu Agency/Getty Images

Anger over a Missouri grand jury’s decision not to indict the police officer who shot Michael Brown to death continued to reverberate around the country Tuesday, with protests and demonstrations from coast to coast.

A melee broke out after protesters shut down a San Francisco highway, a car plowed through a crowd in Minneapolis and marchers in New York City caused a 12-block backup at the entrance to the Lincoln Tunnel.

Marchers in New York City brought traffic to a standstill, causing a major backup at the entrance to the Lincoln Tunnel. The demonstration began when about 250 protesters gathered in Union Square and began marching up Broadway on Tuesday evening, holding signs reading “We will not be silent” and “A badge is not a license to kill,” NBC New York reported. Several major streets, highways and bridges were gridlocked late into the night as protesters marched from Union Square north to Times Square, then back downtown toward the Manhattan Bridge. There were “numerous arrests” but no injuries reported during the demonstrations, according to NBC New York.

In Atlanta, at least 21 people were arrested after a group split off from a largely peaceful demonstration earlier in the evening, police said. One police officer was wounded after a protester shot a flare into his neck, officials added.

On the West Coast, at least 40 people were arrested in a melee that escalated after some protesters shut down traffic on a major highway in the San Francisco Bay Area on Tuesday.

Police in nearby Oakland said they had made “several” arrests after crowds assaulted officials and set garbage on fire, NBC Bay Area reported. A large group of protesters disrupted traffic on Interstates 980 and 580 in Oakland late at night. Protesters also made their way to a California Highway Patrol office, where multiple people were arrested after they lit small fires and set off fireworks. Police said they recovered a firearm from a protester who was vandalizing a police car.

Nearly 100 people were arrested in Los Angeles. Several hundred protesters marched across the Southern California city, engaging police in a standoff at a freeway ramp and surrounding a state Highway Patrol car, NBC Los Angeles reported. Demonstrators threw debris onto U.S. 101, better known as the Hollywood Freeway, bringing traffic to a halt in both directions on one of the busiest streets in America. Police said an officer was injured when a frozen water bottle was hurled at his head near police headquarters downtown, and that at least four people had been arrested.

Seven people were arrested in Portland, Oregon, after about 200 people broke off from a peaceful demonstration and crossed a local bridge. Police said a driver was punched in the face by a protester and that protesters threw rocks and bottles at police. Officers used pepper spray in the confrontation, police added.

Four people were arrested for blocking a roadway in Denver, where authorities said several hundred people massed for a protest march, Reuters reported.

In Boston, ramps to the Massachusetts Avenue Connector were closed Tuesday night as state police tried to keep an estimated 1,500 protesters from marching onto the highway in one of the night’s biggest rallies. Inmates at a correctional facility in Boston taped Brown’s name on a window in solidarity with demonstrators who marched outside, according to Reuters.

In Washington, D.C., one group staged a “die-in” in front of police headquarters to symbolize Brown’s death in the streets of Ferguson.

“We did the ‘die-in’ for four-and-a-half minutes to represent the four-and-a-half hours they let Michael Brown lay in the street dead, unattended,” protest organizer Angie Brilliance told NBC Washington.

Hundreds of Seattle high school students walked out of classes Tuesday and rallied at the University of Washington or marched to the downtown federal courthouse.

And a rally in Minneapolis turned scary when a car plowed through a crowd of protesters. Several hundred people had gathered Tuesday afternoon near the 3rd Precinct police outpost to show solidarity with Brown. Video from the Star Tribune shows the car driving through the group of protesters, seemingly running over a woman’s leg and hitting other protesters, who then start beating on the Subaru Outback’s windows. Authorities say that the driver is cooperating with police and that the victim sustained minor injuries, according to NBC station KARE.

The protests took on double meaning in Cleveland, where hundreds of people marched down a freeway exit ramp to block rush-hour traffic. The protesters were angry over the Missouri grand jury decision but also over Saturday’s fatal shooting of a 12-year-old Cleveland boy by a police officer who thought a toy gun was real.

“The system wasn’t made to protect us,” said one of the protesters, 17-year-old Naesha Pierce, who stayed up until 3 a.m. watching television coverage from Ferguson. “To get justice, the people themselves have to be justice.”