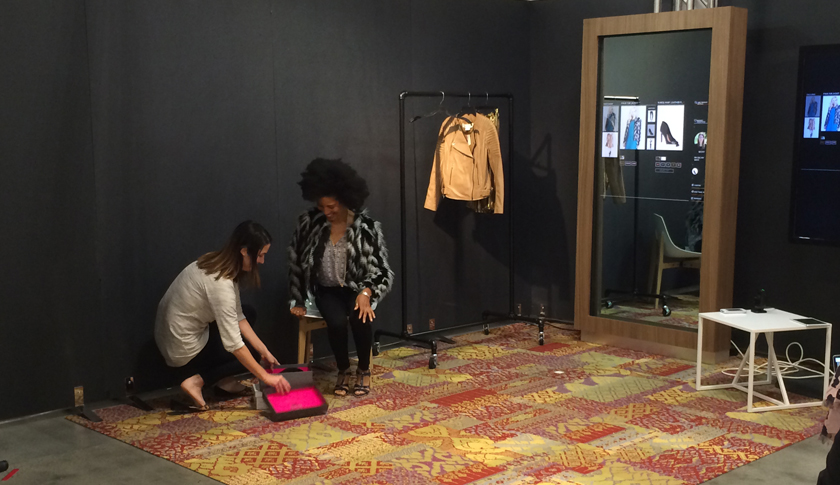 Imagine you are in a changing room at a Nordstrom (JWN) store trying on some clothes . You are looking for shoes to complete the look, or want to read product reviews, or maybe just summon an associate to bring you an item in a different color or size, rather than have to get decent again and go back out to the store floor (if you even decide not to leave).

At two Nordstrom locations, one in Seattle, the other in San José, the upscale retailer is about to provide customers with technology by eBay (EBAY) to do just that: next week, in select departments at those stores, Nordstrom will begin to test full-length mirrors that, with the tap of a customer’s finger, turn into interactive screens, effectively creating smart fitting rooms.

The idea is to bring tech to an untapped part of a store where many customers ultimately make their purchasing decisions: the fitting room.

“The way customers shop for clothes has evolved,” Jamie Nordstrom, the retailer’s head of stores and former leader of its Nordstrom Direct digital business, told Fortune. “How do we take all the information that’s available to customers while they’re sitting on the couch at home browsing and add that to the dressing rooms, so it’s the best of both worlds?”

Getting the best of both worlds is the holy grail for retailers eager to take full advantage of their physical stores in this e-commerce era. Nordstrom, widely considered a technology leader among brick and mortar retailers, plans between this year and 2018 to have spent $1.2 billion on tech, including e-commerce, fulfillment centers, and in-store service enhancements, such as these connected fitting rooms. Last quarter, comparable sales at its department stores were unchanged, showing how important it is to keep pushing to get more out of each shopper’s visit to the stores.

And Nordstrom is not alone in looking for what’s next in retail tech. Bloomingdale’s, the upscale chain owned by Macy’s Inc (M), recently began trying out smart fitting rooms, equipped with wall-mounted iPads rather than Nordstrom’s interactive mirrors, at five of its stores.

“You have shoppers used to having all that content and help in the palm of their hand,” said Wendy Liebmann, CEO of WSL Strategic Retail. “Here, you have a literally captive audience, so there’s the opportunity.”

While Nordstrom’s smart fitting rooms build on what eBay also recently developed for fashion designer Rebecca Minkoff‘s two boutiques, it is a more complicated project given how much bigger Nordstrom department stores are and how much more inventory they hold. And so in that regard, this test will be more telling of how the smart fitting rooms can be adopted by retailers broadly. Nordstrom won’t say how much of a roll-out it is planning—the success of these tests will determine that.

Mirror, mirror on the wall-should I buy this?

In the Nordstrom smart fitting rooms, shoppers will be able to enter with items selected on the sales floor, along with suggestions from the associate. They will also be equipped with barcode scanning to identify what is in the store so if a customer needs an item in another size or color, she can see for herself if it is in stock and instruct the associate to bring it.

For eBay, the technology is yet another step forward in the capabilities it built for Minkoff, and before that for Kate Spade (KATE), for which the tech giant created an interactive storefront at four Manhattan stores that allowed customers standing on the street to pick merchandise, and place an order. The Minkoff stores have the ability to remember what a customer tried on during a previous visit, a capability Nordstrom won’t have right out of the gate.

While one might think such a state-of-the-art technology and how it facilitates high-touch customer service would more suitable to upscale stores, eBay thinks the technology could work even in more value-oriented retail chains. It could takethe shape of a big screen on a wall on the sales floor, rather than a sleek mirror in a changing room. Indeed, Jamie Nordstrom said the tech could potentially work at the off-price Nordstrom Rack stores, though there are no firm plans for a pilot there.

The partnership with Nordstrom is also a way for eBay, best known by consumers for its marketplaces and PayPal payments service, to burnish its reputation as a retail tech innovator, including in physical stores, where more than 90% of sales still take place. Another new eBay initiative is the connected mall it has developed with Simon Property Group, (SPG) consisting of an interactive mall directory that among other things, highlights events and deals happening that day. Growth in tech services will also help as the company gets ready for life after the upcoming spin-off of PayPal in 2015.

“This is about us saying, ‘Hey, are we really just an e-commerce company, or are we really a partner to anyone who does commerce,” said Steve Yankovich, vice president of innovation and new ventures at eBay.