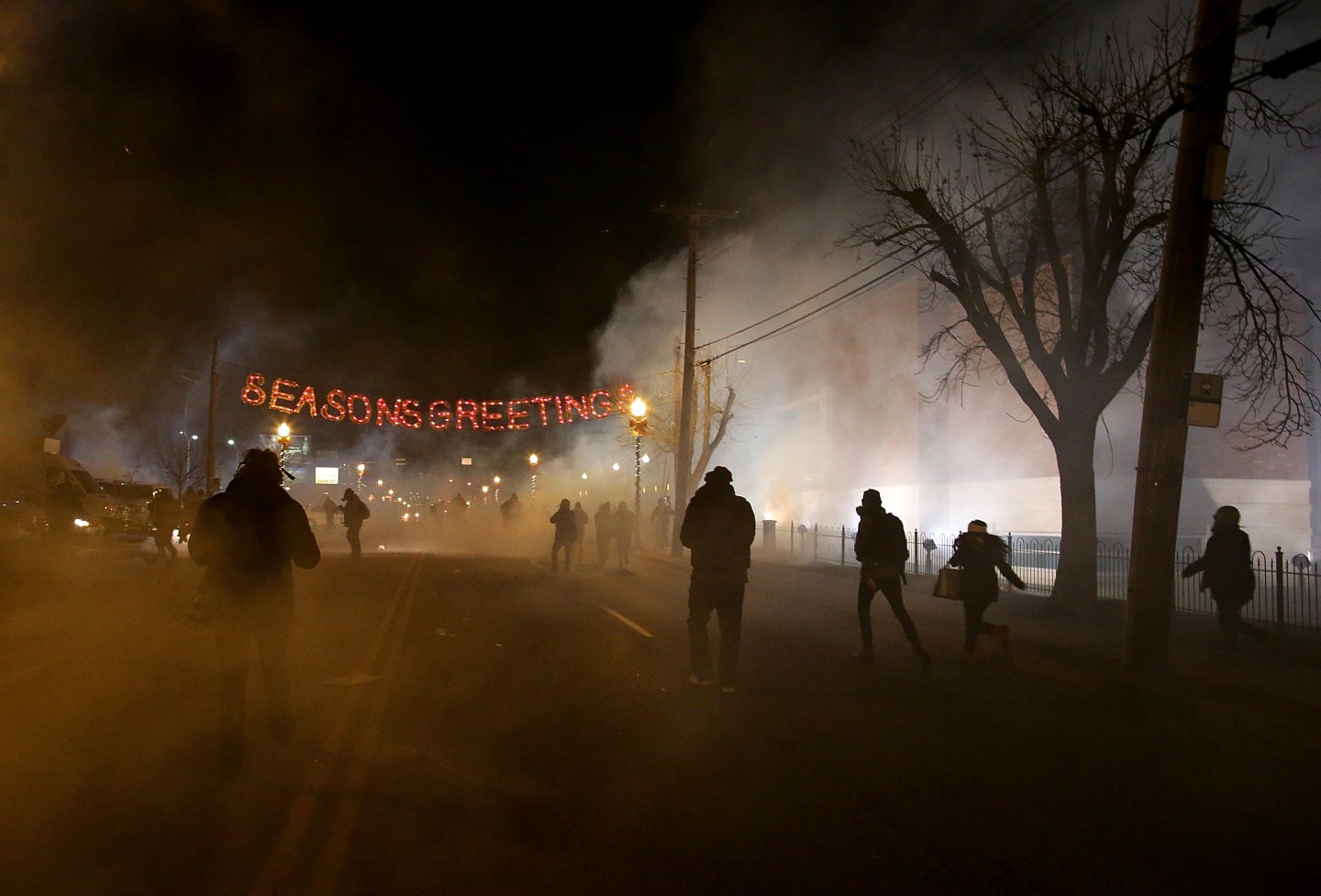 FERGUSON, MO - NOVEMBER 24: Protestors run away after police deployed tear gas during a demonstration on November 24, 2014 in Ferguson, Missouri. A St. Louis County grand jury has decided to not indict Ferguson police Officer Darren Wilson in the shooting of Michael Brown that sparked riots in Ferguson, Missouri in August. (Photo by Justin Sullivan/Getty Images)
Photograph by Justin Sullivan — Getty Images

A grand jury declined to indict Ferguson, Mo. Police Officer Darren Wilson for fatally shooting Michael Brown, an unarmed African-American teenager, after an encounter in the St. Louis suburb on Aug. 9. The decision, announced Monday evening, means Wilson will not face criminal charges in a case that set off sustained unrest and ignited a national debate about race, privilege and policing in America.

The announcement immediately revived the frustrations of protesters who filled the streets of Ferguson for weeks this summer, and had made elaborate preparations to demonstrate against the outcome many predicted from the grand jury.

In a statement, Brown’s family called for peaceful protest and urged support for their campaign to promote police body cameras. “We are profoundly disappointed that the killer of our child will not face the consequence of his actions,” the statement said. “While we understand that many others share our pain, we ask that you channel your frustration in ways that will make a positive change. We need to work together to fix the system that allowed this to happen.”

Lesley McSpadden, the mother of Michael Brown, in sunglasses, reacts as she listens to the announcement of the grand jury decision on November 24, 2014, in Ferguson, Missouri.Photograph by Charlie Riedel — AP

As the decision neared, police were poised for protestors’ frustration to spill over. City, county and state officers, as well as National Guard, were marshaled under a unified command as part of a state of emergency that Missouri Gov. Jay Nixon imposed in advance on Nov. 17, citing “the possibility of expanded unrest.” The atmosphere has been so charged that many area schools closed early for Thanksgiving break and Nixon reiterated his call for calm on Monday ahead of the grand jury’s announcement.

The preparations on both sides fed a sense that the first official finding in Brown’s death would inevitably generate another occasion for talking past one another, and perhaps more violence. Far from being resolved, the mistrust that marked the largely spontaneous original protests – characterized by raised arms and chants of “Don’t Shoot” – had not abated. Nor had the reality that propelled Ferguson onto the national stage: the unwelcome attention African-Americans routinely receive from police, and disproportionate treatment from the justice system as a whole.

In that realm, the details of the Brown case are less significant than the broader experience of many black Americans any time they encounter a uniformed officer. Outgoing U.S. Attorney General Eric Holder said in September that, though he served as the nation’s top law enforcement official, as an African-American man who has been searched unnecessarily by police, “I also carry with me the mistrust that some citizens harbor for those who wear the badge.”

In Ferguson, where the population is two-thirds black, the situation was exacerbated by the composition of a police department that had only four African-Americans on a force of 53. When protests broke out, the heavy duty military gear officers donned to confront them did nothing to diminish the impression of antagonism between police and public. Much of that armor was left over from the wars in Iraq and Afghanistan, and distributed by the Pentagon to local law enforcement departments. The battle gear did little to serve a police force that, like many in the U.S., is seen by minorities “as trying to dominate rather than serve and protect,” in the phrase of Yale Law School Professor Tom Tyler, an expert on law enforcement and public trust.

“This is more than Michael Brown,” area resident Rick Canamore, 50, said Monday as he protested in front of the Ferguson police headquarters. Brown’s death “tipped the pot over, but this has been boiling for years.”

Two federal investigations are still pending. The FBI is investigating whether Wilson violated Brown’s civil rights. Separately, the Justice Department is examining the civil rights record of the Ferguson Police Department as a whole. And Brown’s family could still file a civil wrongful death lawsuit.

But the fraught months following Brown’s death have been focused on the grand jury’s finding, which was both expected and atypical. Expected because a series of leaks in October revealed details that supported Wilson’s version of the encounter. These include medical reports of injuries to Wilson’s face, which officials have said occurred when Brown reached into the patrol vehicle and struck Wilson. Two shots were fired inside the vehicle, but Brown was killed after Wilson climbed out of the vehicle to pursue the 6-foot, 4-inch, 289 pound teen.

Photo of Officer Darren Wilson as released by the prosecutor’s office on the day of the altercation with Michael Brown on August 9, 2014 .Photograph by St. Louis County Prosecutor’s Office — Reuters

Local officials emphasized that the grand jury examining the Ferguson case had unusual leeway – though critics say that leeway tended to serve Wilson. The panel, which had already been seated at the time of the Brown’s death, was broadly representative of St. Louis County, with nine whites and three African-Americans. It met weekly for three months, and was presented “absolutely everything” about the altercation, said St. Louis County chief prosecuting attorney Robert P. McCulloch.

That meant it heard from witnesses who said Brown appeared to have had his arms up in surrender at the moment he was shot, as well as from witnesses who supported Wilson’s account that the teen attacked him, and was charging at him head-down at the time of the shooting. One of Brown’s six bullet wounds was on the top of his head.

In another departure from normal proceedings, the grand jurors did not hear a prosecutor recommend a charge and present evidence supporting it. Instead, they were offered a range of possible charges, from murder to involuntary manslaughter. Activists say that increased the likelihood no indictment would be brought.

In addition, Wilson took the unusual step of testifying, which seldom happens because defense attorneys are not allowed to be present in grand jury proceedings. But it may well have helped the officer, inasmuch as the question before jurors was whether he had reason to fear for his life.

In short, the grand jury’s inquiry proceeded very much like a trial – but in secret, as grand jury proceedings always are. That sat poorly with attorneys representing Brown’s family. The prosecutor’s office took the unusual step of recording the sessions, and promised to release them if indictment was declined, apparently in hopes of achieving a measure of transparency after the fact.

That might not have been possible. “If there’s no true bill,” Adolphus Pruitt of the St. Louis NAACP told TIME in September, “as a community, we are going to be thrust right back into the same discontent and civil disobedience we experienced the first time around.”

Similar vows were heard from a variety of groups that descended on Ferguson in anticipation of the grand jury’s decision. The community remained on edge despite town meetings moderated by national figures, efforts at police reform such as wearable cameras, and sometimes fumbling attempts at reconciliation by local officials. In late September, Ferguson police chief Tom Jackson apologized for leaving Brown’s body in the street for about four hours – infuriating bystanders who saw it as yet another sign of disrespect. The chief’s apology was offered to Brown’s parents, but delivered in a video aired on CNN, and distributed by a public relations firm. Another grievance came Monday afternoon, when attorneys for the Brown family say the parents first learned that the grand jury had reached a decision when they were asked about it by a reporter.

New incidents, meanwhile, kept emotions raw. In Ferguson, where some police officers wore wrist bands reading “I am Darren Wilson,” an officer was shot in the arm while chasing two men who ran from him when he approached them on Sept. 27. And on Oct. 8, an 18-year-old African-American was shot and killed by an off-duty St. Louis police officer after allegedly firing a stolen gun at him.

A police car is set on fire after the announcement of the grand jury decision on November 24, 2014, in Ferguson, Missouri.Photograph by Charlie Riedel — AP

The protests that began the night Brown’s lifeless body fell onto Canfield Drive never really stopped. Mostly peaceful demonstrations continued day and night over the weekend before the grand jury announcement, the rowdiness growing the later it got. A dozen people were arrested in a four-day period ending Sunday. The weather helped police, with cold and continuous rain causing protesters to disperse on several occasions, according to the St. Louis County Police Department spokesman Brian Schellman.

The ongoing protests have cast a pall over virtually every corner of the community. Area businesses report sales down as much as 80%. That many decided to board their windows as a preventative measure ahead of the grand jury decision kept even more shoppers away. Donations to local religious groups and nonprofit organizations have been sluggish. A local food pantry’s stock is low because “people don’t want to come into the area,” says Jason Bryant, a local pastor.

It’s been enough that even local residents eager to see the incident lead to lasting change are ready for the eyes of the world to turn elsewhere. As Taneesha Jones, 31, a Ferguson resident who lives near the QwikTrip gas station that was torched in the first wave of looting, put it Monday: “Let’s just get this over with so we can all move on.”