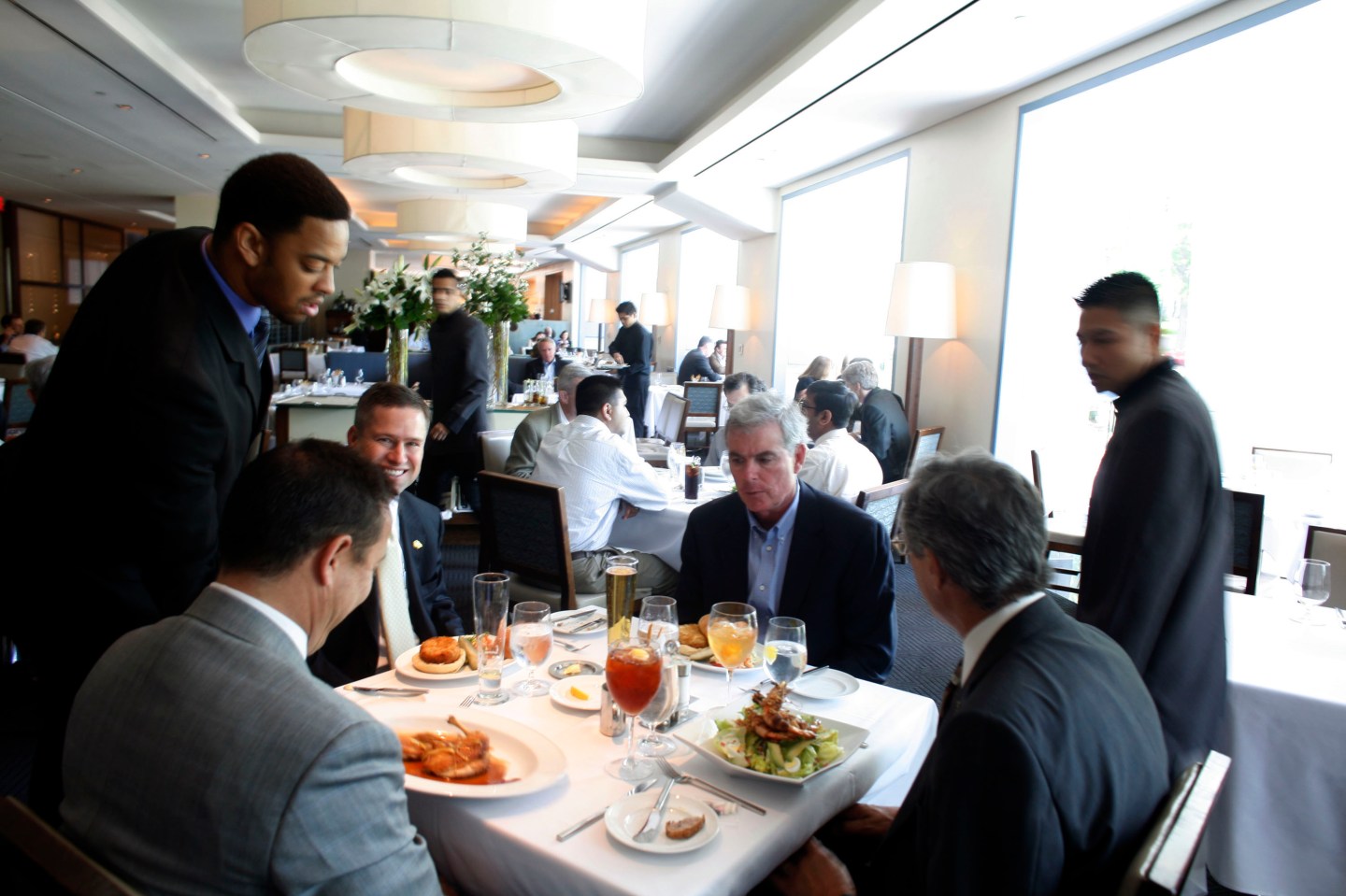 UNITED STATES - MAY 13: A waiter serves lunch entrees to patrons at Charlie Palmer Steak in Washington, D.C., U.S., on Tuesday, May 13, 2008. Charlie Palmer Steak is Washington's favorite site for politicians to dine, according to a study by the nonpartisan Center for Responsive Politics. (Photo by Jay Westcott/Bloomberg via Getty Images)
Photograph by Jay Westcott — Bloomberg via Getty Images

The crisp white tablecloths, a subtle nod from a competent waiter, the near-euphoria of perfectly cooked filet: fine dining is one of the most seductive pleasures of modern luxury—especially for the Fortune 500 CEO, for whom a choice table at a hotspot is not just where the meals are served but where the deals get done. As we all get ready to gather around our own Thanksgiving tables, Fortune has compiled a list of the top spots where the top names in business like to go to see and be seen (and also eat). Herewith, our list of the restaurants in the U.S. where you’re most likely to be seated next to a Fortune 500 CEO. Don’t forget your Amex Black Card.

Those in the know know the Four Seasons does not refer to the hotel but to the legendary restaurant where the Masters of the Universe come to decide the fate of the rest of us over $100 lunches of fig-stuffed quail and fluke ceviche. It’s been referred to as “Gotham's ultimate playpen of power,” the “epitome of urbanity,” and the “absolute ground zero of the power lunch.” Sure the dish of choice is the Dover sole, but the Four Season’s waiters are also said to have scrambled to fill Warren Buffett’s order of a steak, Cherry Coke, and Dairy Queen dessert. Both President Kennedy and Norman Mailer have thrown birthday parties here; and when Fortune chronicled the megawatt luncheon last December where Jamie Dimon, Lloyd Blankfein, Henry Kissinger, Michael Bloomberg (and more) gathered to talk presidential candidates, this is where they ate. Had the Yalta Conference happened anywhere but Yalta, it probably would have been a Grill Room corner table.

When someone strikes oil, the proceeds trickle down to Café Pacific. With Dallas’s 18 Fortune 500 companies and booming energy industry, there’s no shortage of buyers for the restaurant’s $42 sea bass. It’s been said that the restaurant “reeks of old money;” indeed, while you aren’t likely to see celebs, the clientele exude an “aura of power.” T. Boone Pickens is a fan, and when former President George W. Bush and other dignitaries make a visit, they favor the secluded back table for security purposes. But jockeying for the relatively private center tables goes on all day.

Manager Emil Varda (R) poses with chef John DeLucie at The Waverly Inn in New York August 10, 2007. In less than a year, The Waverly Inn has earned a reputation as the most exclusive celebrity eatery in New York with an unlisted reservation number known only to a lucky few favored by co-owner Graydon Carter, editor of Vanity Fair magazine. REUTERS/Shannon Stapleton (UNITED STATES) - RTR1SOIL

Edward Norton, Arianna Huffington, a Buzzfeed editor, and an Uber executive walked into a restaurant—it’s not the beginning of a joke. The soiree really happened this November, and the conversation--gleefully rehashed by Buzzfeed--touched off serious controversy for Uber. But this kind of high-wattage meeting isn’t uncommon at the swank restaurant, owned by longtime Vanity Fair editor Graydon Carter. The Waverly Inn regularly hosts an unusual mix of business moguls and artistic luminaries, and its name makes frequent appearances in Page Six. In 2008, a high-society photographer told the New York Times, “It is really the only place I can think of right now where [the paparazzi] are consistently parked outside.” The food? Meh. One reviewer called it "semi-competent," designed not to distract from the real business at hand for high-profile patrons: "to have a drink or two and bask in the reflected glow of each other’s glorious presence."

Sure, it's a chain. But then again so are most of the steakhouses that lard up the expense-account scene in the capital (see other standbys including The Palm, Mortons and the Capital Grille). What distinguishes Charlie Palmer's isn't the food—which is reliably solid if uninspired—so much as the location. It anchors the ground floor of 101 Constitution—the only commercial office building that John Boehner could reach from his Capitol balcony with a driver and a sand wedge—not to mention it’s home to the Washington offices of Altria, FedEx, Goldman Sachs, Honeywell, and Palantir Technologies, among others.

The most powerful men in the world (yes, men: one reporter counted 48 blue men’s suits among the 53 patrons), come to this Midtown Italian eatery for the “opportunity to rub up against one another and purr,” the New York Times wrote in 2005. Since then, the restaurant dubbed “Wall Street's version of the high-school cafeteria,” has solidified its place in the pantheon of big-money deal making. A line of tables along the window has been nicknamed “Chairman’s Row” for the high-profile patrons who stake out these regular seats at breakfast, lunch and dinner. In Andrew Ross Sorkin’s crisis retrospective, Too Big to Fail, he wrote that even during the depths of the meltdown, Morgan Stanley CEO John Mack ordered takeout from the pricey restaurant.

The upstart Chicago steakhouse, opened in 2010, has drawn the kind of star power more commonly associated with L.A. than Middle America: Oprah Winfrey, Kate Upton and Ryan Seacrest are all devotees (Winfrey tweeted that it was “Phenom!!”). The restaurant also has cachet with the business crowd looking to break fast and cut deals. Challenging the once unquestioned supremacy of Windy City classic Gibsons Bar & Steakhouse, leaders of the state’s 33 Fortune 500 companies have flocked to the downtown-Chicago hub. On offer: Big helpings at Midwestern prices—$16 for a signature burger.

New York’s nonpareil hotspot for media and art glitterati turned 25 this fall. While the New York Times has accused the food of being “gloppy, affected pub grub,” the critique was understood to be irrelevant. As the Washington Post once wrote, the real point of eating at Michael’s is to “(a) to network and do business, and (b) to talk about the people who eat at Michael's, with a heavy emphasis on (b).” The tables closest to the windows on 55th street are the most coveted, but getting there takes clout—the proprietor himself draws up the seating charts for lunch each day the night before.

OK, so it’s not exactly a restaurant, but it has one—along with a spa, a gym, a private theater, and a library. This relative newcomer to Manhattan private club landscape opened in 2005, and membership costs some $15,000 a year plus a $50,000 initiation fee. But that’s pocket change for most of its ultra-rich members. The club serves as a office away from the office for a host of elite dealmakers, as well as a bathroom away from home: the Times quotes the club’s skin therapist explaining, “In an emergency, if someone calls us and says, ‘I’m going to pop this pimple myself if you don’t see me,’ we get them right in.”

The venerable meeting spot for L.A.’s biggest dealmakers suffered a blow this summer when stars vowed to boycott the Beverly Hills Hotel and others owned by the Sultan of Brunei, under fire for human rights abuses. But with a 102-year history that includes changing the dress code for Marlene Dietrich to allow trousers, and reserving Booth 1 for Charlie Chaplin, the scuffle is unlikely to undo the Hollywood institution.

Every summer, the country’s most powerful business leaders and a sprinkling of celebrities descend on the small ski town of Sun Valley for the annual Allen & Company confab. Dinner is provided for guests, but that doesn’t stop the conference’s media moguls and tech titans from venturing out for local fare (more than a few have bought houses in the idyllic town, too). The destination du jour is Enoteca, a low-key Italian eatery in nearby Ketchum where celebrities go virtually unnoticed—save for the recent too-buzzy-to-miss dinner with Mark Zuckerberg and Chris Christie. The restaurant is an offshoot of the venerable Ketchum Grill, which counted J.F.K. Jr. among the ranks of its well-heeled and loyal clientele.