It’s time for India and the U.S. to band together 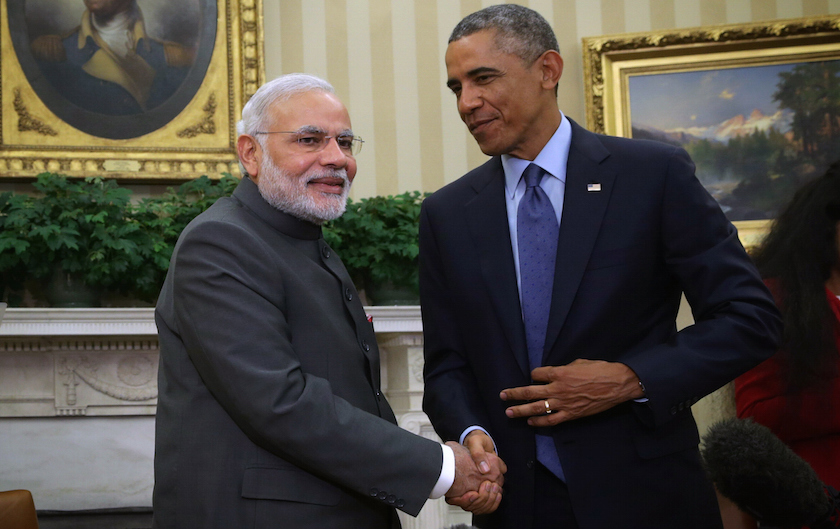 India’s recently elected Prime Minister Narendra Modi just enjoyed a very successful visit to the United States. Modi, who is the head of the Bharatiya Janata Party (BJP), is a very different kind of leader than those of the ousted Congress Party. He appears to be substantially pro-foreign investment and in favor of market-based reforms to improve his nation’s welfare.

But for Modi to jumpstart India’s economy, a new balance of power must emerge in Asia. As the world’s most powerful democracies, India and the United States should consider developing an alliance. A mutual defense treaty could maintain regional peace and security, counter threats to the liberal economic order, and promote the regional status quo, which would in turn underwrite India’s rejuvenation.

Americans are benefitting enormously from their relationship with India. Indians have emigrated to the U.S. in large numbers, they and their children have enriched American universities, and their entrepreneurship and technical skills have produced thousands of jobs and companies. Indian-Americans have become political leaders (including two governors), university professors, and the CEOs of household-name companies like PepsiCo and Microsoft. Bilateral trade has increased five-fold since 2001 to nearly $100 billion; Presidents Obama and Modi recently pledged to raise it another five-fold. New Delhi’s economic reforms have reinforced its valuable role in regional stability at a time when disorder seems to plague the Middle East and Southeast Asia.

India’s historical ally, the Soviet Union, had been aligned with the Nehru-Gandhi dynasty and their Congress party. This gives Modi’s BJP incentive to develop a viable alternative in a robust alliance with the United States. As the chief minister of Gujarat, Modi is already on record as favoring neoliberal economic policies, spurning India’s vestiges of socialism, five-year plans, and overregulation of private industry. Modi’s tenure as Gujarat’s leader was not without its religious and managerial complexities. Modi’s political success and promises of economic reform in spite of these bumps suggest that the new prime minister could function as a reformer in the American mold. India’s foreign investment prospects stand to grow even stronger as its national security becomes more reliable.

Most importantly, India and the United States share an immediate interest: containing China. China’s political and military rise as the world’s largest economy may be inevitable. However, it is unknown whether China’s rise will spell the end of the western economic and political order. At the beginning of the Cold War, many observers worried that the Soviet Union and the communist bloc would attain global dominance. But the United States and its allies successfully pursued a steady, half-century containment strategy, rebuilding the West, fostering Asian and Latin American growth, and waiting until the Soviet Empire collapsed under its own weight.

Faced with an authoritarian, expansionist China and a revanchist Russia, it is in both American and Indian interests to strike an alliance. Russia’s Ukrainian incursion and China’s aggressive moves along the India-China border and in the South China Sea should encourage cooperation between the U.S. and India. Indeed, American and Indian interests coincide far more than those of the United States and China. The United States and India both aim to maintain democracy worldwide, preserve a stable international order, peacefully resolve militaristic and trade issues attending the South China Sea, and promote economic growth through free markets. Meanwhile, China defends authoritarianism, seeks to maintain the role of state-owned enterprises, and may be destabilizing Asia in its quest to reassert its claims against its neighbors.

Drawing 2.3 million active frontline personnel and a $126 billion defense budget, China seems intent on using its military to expand its political influence. But the nation can be fickle in its allegiances. In fact, its only constant commitment is to pragmatism. Beijing famously broke with Moscow in 1961, invaded Vietnam in 1979, and has gone from skepticism to endearment to engaged rivalry with the United States. In 1971, Beijing even consulted Washington about its uncertain strategy during the Indo-Pakistan War over the sovereignty of Bangladesh, then East Pakistan. Despite having a troubled relationship with India since the Sino-Indian War of 1962, China knows that having Most Favored Nation status with the U.S. (rechristened as Permanent Normal Trade Relations) is much too important to jeopardize.

India’s best interest will lead her to build a coalition with the United States, Japan, South Korea, Vietnam, the Philippines, Indonesia, Malaysia, and Australia. India’s role in this balance of power would be crucial. In fact, India has an opportunity to survey as a counterweight to China, just when the U.S. needs to reconsider its relationship with Pakistan. Once Washington’s staunchest ally in the region, Islamabad—whose relationship with India is fraught with fears over their shared border—has become an obstacle to ridding Afghanistan of the Taliban and destroying al-Qaeda. Without the United States, however, Pakistan would lose its primary military and financial advisor and aid source.

India cares about collaborating with the United States and with other nations. A military equipment deal, a goodwill package like the Marshall Plan, or legislation raising India’s H1B visa quota, particularly for science and IT professionals—something that American firms have been clamoring for, anyway—would go a long way. The two nations would also benefit from mutual cooperation to apprehend terrorist networks that have bedeviled both the United States and India. All of this would help India stabilize South Asia.

The deal makes sense on both defense and economic fronts. President Obama and future commanders in chief can present such bipartisan foreign policy to a newly composed Senate for treaty ratification. The United States will benefit from a strong ally to stabilize a disruptive region of the world, while India can gain the confidence of having the support of the world’s most powerful democracy. There is no better time than today for such a partnership. Both nations should consider seizing it—after all, fortune favors the bold.

John Yoo is the Heller Professor of Law at the University of California at Berkeley and former Deputy Assistant Attorney General. Riddhi Dasgupta is an international law expert and author of International Interplay. Views expressed are their own.