Tilt and the future of crowdfunding 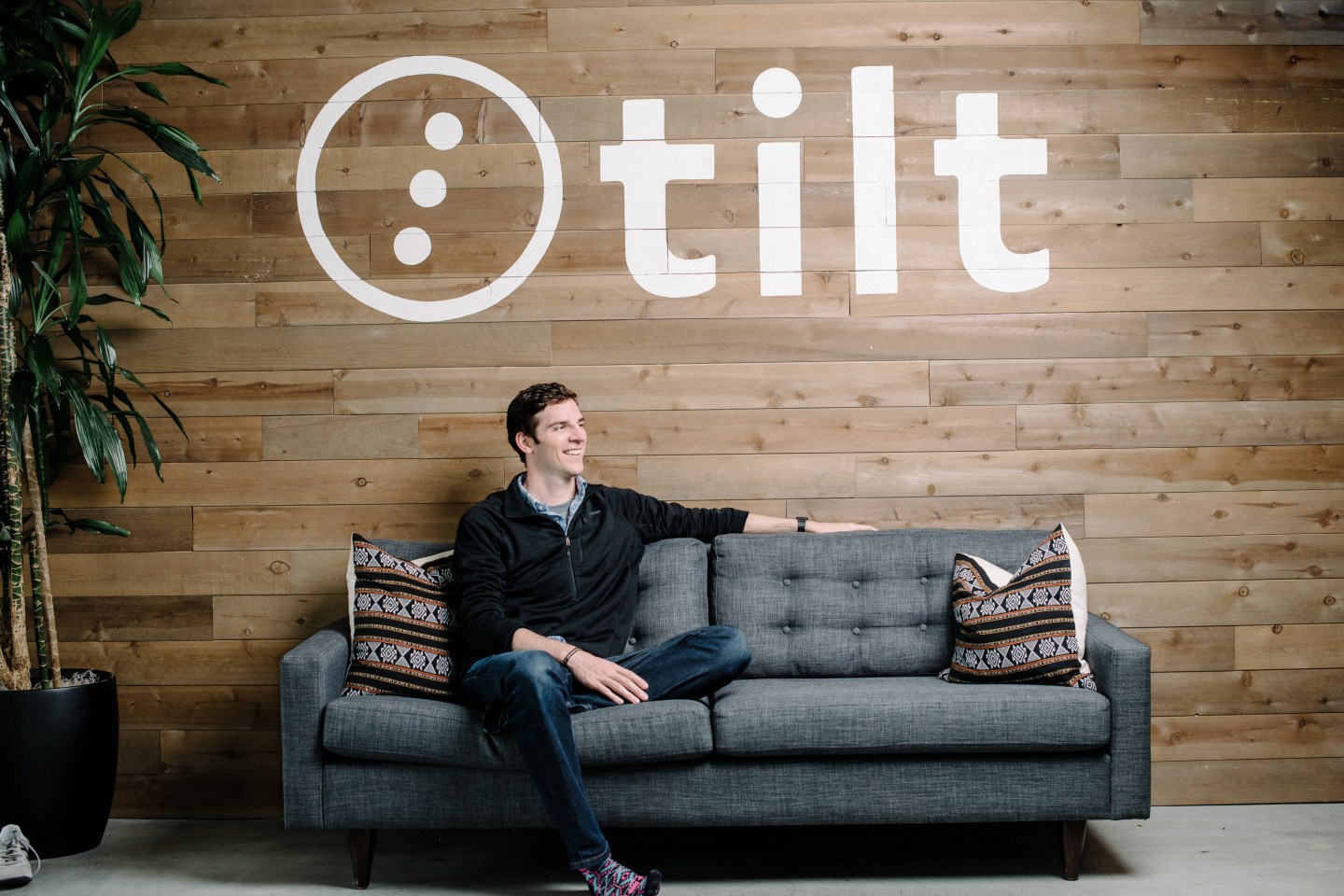 Reports of the crowdfunding revolution have been greatly exaggerated.

Even James Beshara, chief executive of a crowdfunding company, acknowledges it. “The amount of attention it gets far outweighs the number of people using it,” he says.

Instead, he’s betting on the next 10 years. Beshara is co-founder and CEO of Tilt, a company that offers a platform for people to receive money from a group of friends or colleagues. Here’s how it works: Set a minimum target, and when the group “tilts”—that is, hits the amount—people will be charged. It can take place on its web site or through its mobile application. Occasions to use the service could range from paying someone back for a big dinner to raising money for a charity 5k run. But for now, it’s being used mostly for college keggers. That’s fine by Beshara: “We’re okay with building a platform that has these trivial use cases, like for a tailgate, because by the seventh use case, they will use it for a more noble cause.”

At least he hopes so. Noble causes is where Beshara believes the space is headed. His big gamble is the prediction that 10 years from now, 1 billion people will be using crowdfunding—including big corporations. “It’ll be mobile, it’ll be in micro-bites,” he says. “And they won’t be using the options that exist now.” He’s referring to Kickstarter, Indiegogo, and the like. Beshara doesn’t see those as his competitors, even though all three have overlapping purposes. He adds that many people don’t necessarily want “the big ornate Kickstarter campaign.” Given that the transaction involves friends paying each other back for an event, you’d think this is Square Cash or Venmo territory. But those aren’t built for groups. “Venmo works for one to one, but when you really want a social product,” Beshara says, “it’s like the difference between e-mail and Facebook.” (That may be, but Square, with its size and influence, could certainly choose to enter the group space, which would pose a problem for Tilt.)

Competition or none, Tilt is growing like crazy. It has $37.1 million from three rounds of funding, from names like Ron Conway, Marc Andreessen, Sean Parker, Reddit’s Alexis Ohanian, WordPress’s Matt Mullenweg, and the rapper Nas. It won’t disclose how many users it has, but says the figure is climbing at an average of 53 percent each month. The company has 66 employees and occupies an expansive, two-floor office in San Francisco. It launched in February 2012, but had its most significant coup in August, when it landed a deal to be the payment platform of ESPN fantasy football. The sports giant encouraged all league commissioners to collect payments for the season using Tilt—big exposure for the little-known platform, and a missed opportunity for PayPal (PYPL) and other more established payment companies.

This week, ESPN added Tilt as the payment platform for its fantasy basketball, as well.

In keeping with distancing itself from the current concept of crowdfunding, Tilt simplified its name this summer; the company was originally called Crowdtilt. Besides, Beshara says, “crowdfunding is a loaded term in people’s minds. The irony is it’s not really about a crowd at all. It’s small groups with intimate connections. It is very rarely total strangers.” Indeed, 54% of contributors to a Tilt campaign are second-degree or third-degree connections of the person who started it.

Tilt’s story isn’t the typical one in Silicon Valley, where a Stanford engineer drops out to start something. Beshara, 28, is from Dallas and studied development economics at Wake Forest. He went to South Africa after graduation to work with the unbanked and underbanked. In the small township where he lived, he would observe groups collecting money from the community, like schoolkids, or families for a sick child, or farmers pooling $100 for a new water pump. It led him to return to the U.S. in 2011 to create Tilt, with the help of Y Combinator, the popular startup accelerator. But his goals for it remain squarely in social good. He foresees two changes in the culture in the next 10 years: people “flexing their collective muscle” to fund social causes, more than their own endeavors; and big brands utilizing crowdfunding to introduce new products.

On the social good side, Beshara acknowledges: “It sounds so trite for a young tech founder to talk about the world as a global village, but that’s where I think it’s going. Crowdfunding will move away from flashy products and return to the core needs. If you want to really get philosophical, this could relegate charities useless.” (Picture consumers and companies using Tilt to make charitable donations right from their phones.) For this to take place, of course, the money being raised on Tilt needs to increase. Beshara says that’s already happening: the average first Tilt campaign is for $480, the second is $720, and by the third, the average climbs to $2,100. In other words, the targets grow as users get more comfortable. He calls Tilt a social network, which may seem strange; it’s more of a functional tool. But the social element is in seeing where your friends are spending their money (Venmo, too, plays off this) and on spending it together. “Think of Tilt as ‘our money,'” he says. “Like, ‘What can we do with our money?'”

Tilt quietly launched its product for businesses, Tilt Open, in February. (Beshara still calls it the company’s “skunkworks” project, and the name may change.) The hope is that popular brands will use it to test the waters before rolling out a new product. Flashy camera-maker Lytro used it to take pre-orders for its next camera. Nutritional drink company Soylent launched a Tilt campaign last year with a $100,000 goal, and ended up raising $3 million. While Tilt is free to consumers, it takes a 2.5% fee from brands. “I think that is how big enterprises will make these decisions down the road,” Beshara says. That part is what’s most exciting to Jeff Jordan, a partner at Andreessen Horowitz. “My dream campaign, where I don’t think it has gone yet but it will, is a Nike sneaker,” says Jordan, a former CEO of OpenTable. “Take a passionate group of customers and say, ‘Hey, we were thinking about reissuing this old Air Jordan,’ and then when it reaches a certain quantity, you do it. You harness the community, glean exactly how much of the product to produce, you’ve taken all the risk out of the production.”

Andreessen Horowitz led Tilt’s Series A and Series B funding rounds. The investor Sean Parker wanted to do the entire Series A himself, but after he made that offer, Beshara called Ron Conway, whose SV Angel led Tilt’s seed round, for counsel. Conway reflected, as Beshara recalls, that Parker was being smart by trying to get in before the competition started in earnest, but advised Tilt to get a more rounded group. (It sounds a lot like the bidding race in the premiere episode of HBO’s “Silicon Valley.”) When Tilt turned Parker down, Parker introduced Beshara and his co-founder, CTO Khaled Hussein, to Jeff Jordan. “It was the second time that Sean introduced an entrepreneur to me,” Jordan says. “The first one was Mark Zuckerberg in 2005. So when Parker speaks, I listen.”

With so much support from notable Silicon Valley figures, a raft of funding, and buzz on college campuses, which Beshara says is “by far our biggest demographic,” the main obstacle for Tilt is one it can’t quite control. It needs trends in social commerce to move where Beshara predicts. David Lee, a partner at SV Angel, acknowledges it’s a big bet, but thinks it’s a smart one. “If the last 10 years were about the changing way people consume media and stuff—YouTube, Facebook, Twitter—in the next five to ten, one of the broader themes will be the way people pay for services,” he says. “Think about what’s happening with pretail, the way companies can foresee their inventory. A lot of that is driven by social activity. I don’t want to put them in the same breath as a Brian Chesky, necessarily, but in terms of how he became a symbol for the sharing economy, I think James and Khaled have that potential for social payments.”

The fact remains that many people in the U.S. simply don’t want to spend their money in a public way, even among friends. Payment giants like Visa (V) and MasterCard (MA) know the fears about fraud all too well. Then there are simple privacy preferences. A person in their sixties may have only just become comfortable with Facebook and Pinterest; is it likely they’re going to want their donations or payments visible to others? Beshara responds that for now, there’s enough growth opportunity just among the young and tech-savvy. “Internally, we have a programming mantra: climb the hill that you’re on. We design this for our friends,” he says. “But externally, we do think that 10 years from now, more people will be more tech-savvy.”

Investor David Lee is more willing to admit that there is no guarantee this space will explode. “There are a lot of technologies that come maybe one or two years too early,” he says. “If you think about people’s notions of privacy, and what they’re willing to share, I think it is evolving quickly. But it’s definitely an open question.”

Next, read: “Why investors are pouring millions into crowdfunding” by Katherine Noyes.