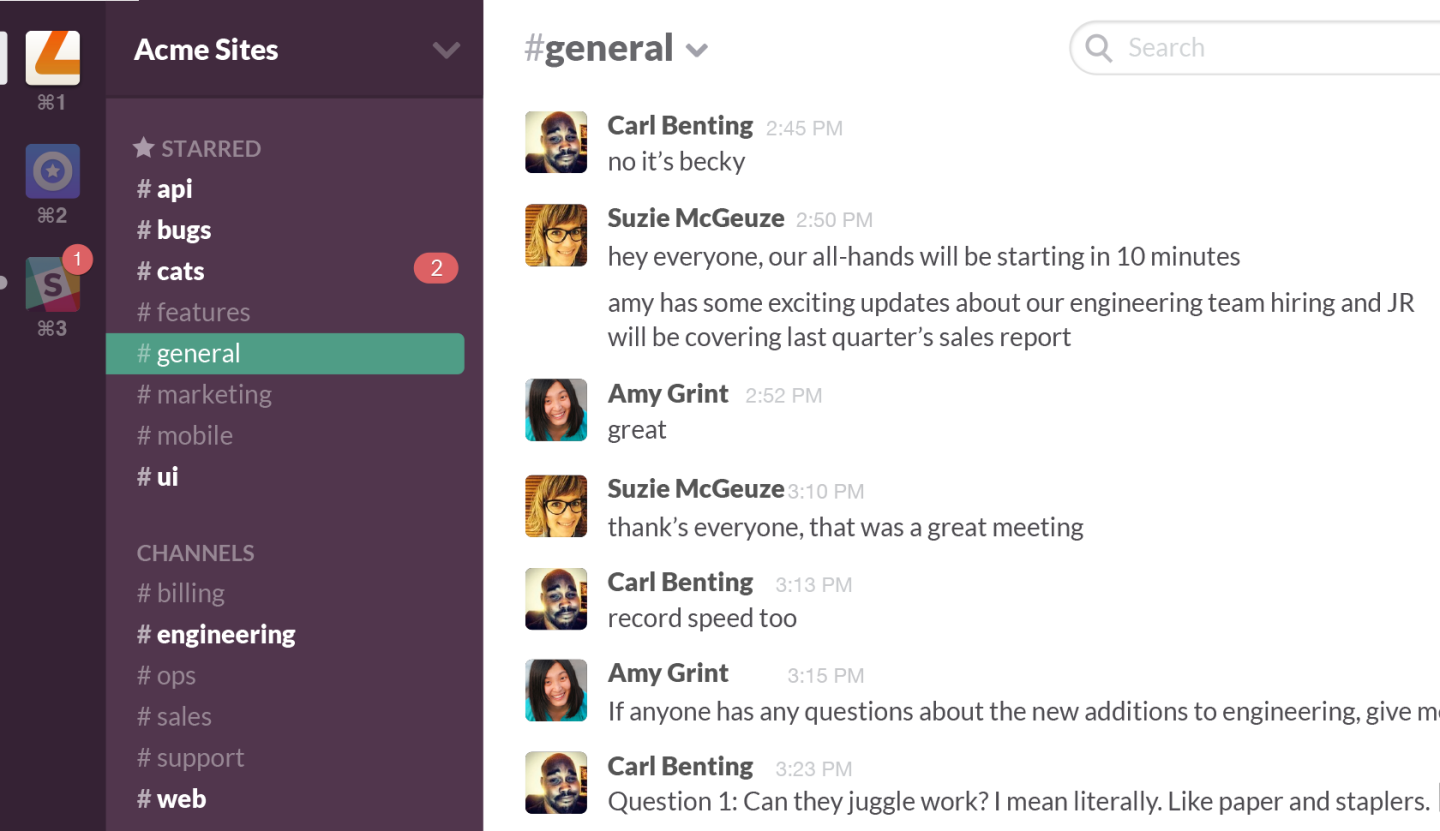 Slack this morning announced that it has raised $120 million in new VC funding at a $1.12 billion post-money valuation, in a round co-led by Kleiner Perkins Caufield & Byers and Google Ventures (GOOG). This comes just eight months after the company’s team communications platform went public, and just six months since the San Francisco-based company raised $43 million from firms like Andreessen Horowitz, Accel Partners and The Social+Capital Partnership.

To be sure, this was a very buzzy deal in Silicon Valley. For every venture capitalist blown away by the company’s rapid growth — it already is used by 30,000 teams to send over 200 million monthly messages — there seems to be another that wonders if the accelerated fundraising masks a lack of product defensibility.

So we spent some time chatting with Slack co-founder and CEO Stewart Butterfield, who previously co-founded image-sharing site Flickr, which was sold to Yahoo (YHOO) in 2005 for around $40 million. What follows is an edited transcript of our conversation:

FORTUNE: Slack had raised over $40 million just six months ago. Why come back so soon to raise so much?

BUTTERFIELD: There are a bunch of reasons. First, it’s impossible to call a top but it’s pretty clear that we’re far from the bottom when it comes to overall market valuations. So part of it is a hedge against what could happen over the next couple of years, even though we had a ton of money on the balance sheet.

I don’t think it was quite apparent in April how big an opportunity this was going to be or how fast it would be growing. Remember, we only started working on this in January 2013, went into beta that August and launched publicly in February of this year. The growth has been completely insane and almost entirely on word of mouth. In fact, we just hired our first marketing person, but he doesn’t begin until next week. Finally, we want to be super-aggressive. I feel like the next 16 to 18 months are going to be critically important to us. We don’t have any significant competition and want to get our far ahead now.

Why do you think Slack has taken off in a way you didn’t anticipate?

We thought it would be a good product people would like, but we didn’t realize the demand. For example, if you create a sales team, the first thing you need to go is buy a CRM system. Or if you create an engineering team, you need a source control system. But when starting a new company, no one has thought that they need a system for internal communications. But a lot of them have done it, just ad hoc by using a lot of email lists of Skype chats or WhatsApp or private Facebook groups or even the private versions of Google+ that comes with Google Apps accounts. People didn’t think of it as a product category, whereas now I think a lot of people are.

You talked about kind of saving up capital for a tech valuation winter. If the broader economy pulls back, are you worried that businesses will stop new tech spend on products like Slack?

I don’t think it would have a strong impact on us. It’s probably true that no one is going to go for a giant switch over from SAP to WorkDay, even though it would probably save them money, because that involves hundreds of thousands or millions or dollars that gets decided top-down during a budgeting process. But Slack can be just 22 cents per day that people put on their credit cards and no one even really notices that it’s happening. Plus, we want to keep developing a better enterprise product to improve our value. For example, eBay currently has five paid teams using Slack and Adobe has nine. We want to somehow pull those together in a way that consolidates billing and the administrative experience.

Yes, HipChat has many similarities, and we used to use IRC, which was where the original inspiration for Slack came from. So I shouldn’t suggest that no one is doing something similar. But what I really mean is that when you ask businesses what they use, 80% say nothing while 20% say something in the category. I’m sure some people use Yammer, but I don’t know anyone who uses it over a sustained period of time. But the overwhelming majority of people coming to us came from using nothing, as opposed to us trying to get them to switch from something else.

Slack’s core functionality doesn’t seem to differentiated from something HipChat, though. Why do you think you’re getting so much traction?

Well, we do have some different features with search and other little things. But I think it’s hard in the moment to know exactly why it’s working. Just like Google vs. Alta Vista. At the moment it was difficult to explain, but it’s relatively easy to put your finger on it retroactively.

Slack is now valued just a hair below Yammer’s valuation when it sold to Microsoft in 2012. But Yammer had many more customers at the time than you do now. Why should Slack be worth nearly the same amount?

Our trajectory is completely different than Yammer’s was when it sold. Yammer was five or six years old already, but this is just eight months after launch for us and we’ll hit their numbers within a year and then go past it. And you’ll notice that [Yammer founder and former CEO] David Sacks thinks this is a good investment, even at this price.

Do you think he invested out of spite?

Last week, TechCrunch reported that you were raising this round, even mentioning Kleiner Perkins and the billion-dollar valuation. But you denied it in a brief interview with BusinessInsider. Why?

I think there was a slight misquote or misunderstanding. I was asked if we had raised and I said no. I wasn’t trying to be political but, to me, there are only two positions a company is ever in: Talking to investors or there’s a deal that’s closed. You’re never in the process of raising money.

Will your experience in selling Flickr to Yahoo (YHOO) have any impact on whether you eventually sel Slack or try to keep it independent?

It’s definitely an influence. Not just on me, but there are four other people working with me who were on the original Flickr team and it was very frustrating for all of us. Flickr was just nine people out of Yahoo’s 11,000 when it was acquired, and because we were such a small piece it was difficult for us to hire people. It’s not that Yahoo was bumbling, it was just too big. I’m 41 years-old now, and I’m not sure I’ll have this large an opportunity again. We’ve got no motivation to sell when there’s so much opportunity in front of us.

Sign up for Term Sheet, our daily newsletter on deals and deal-makers: www.GetTermSheet.com