Aggressive Ebola quarantines: What does the law say? 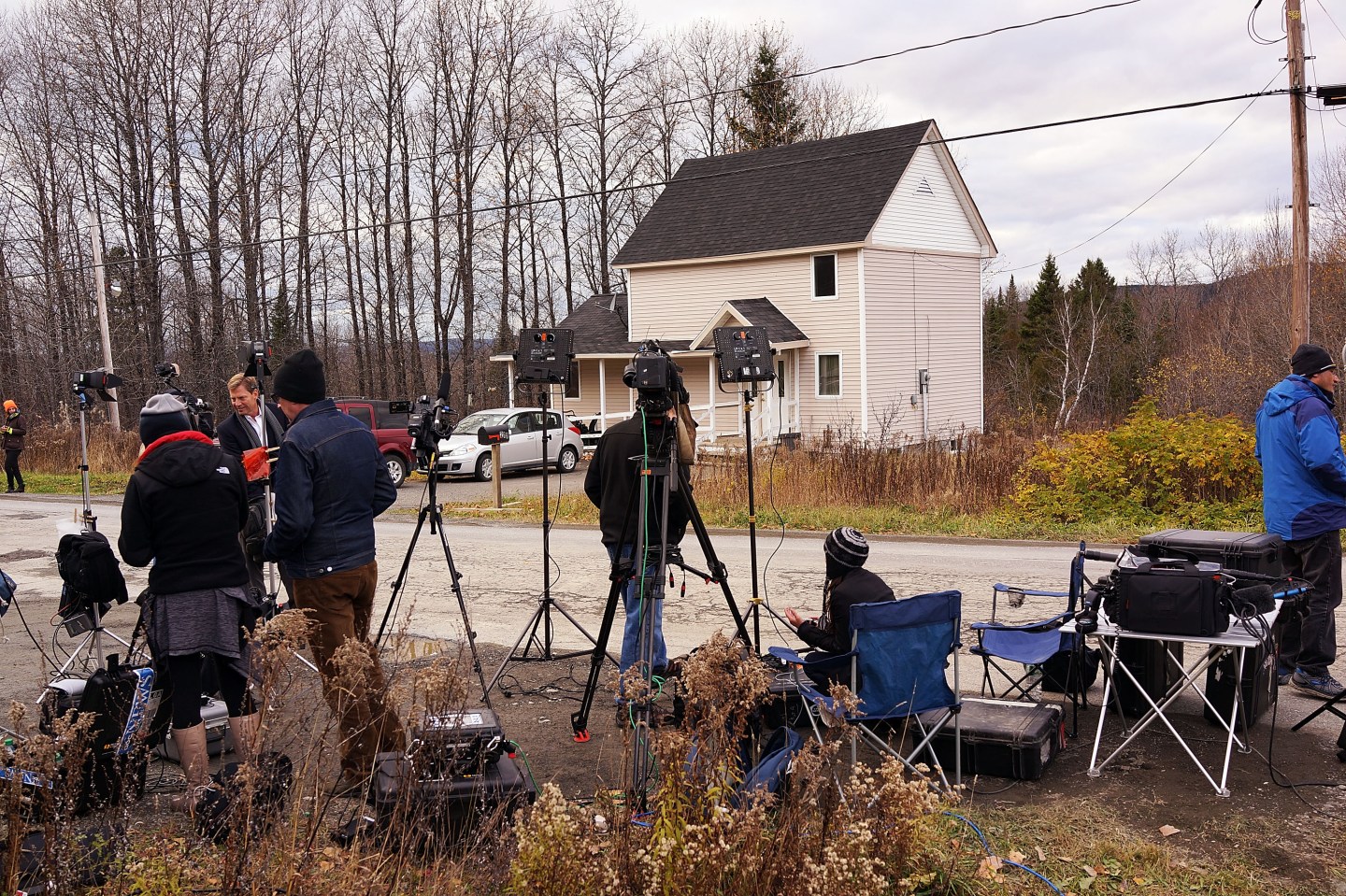 FORT KENT, ME - OCTOBER 30: Members of the media wait outside the house that Kaci Hickox shares with a boyfriend October 30, 2014 in Fort Kent, Maine. After returning from Sierra Leone where she worked with Doctors Without Borders treating Ebola patients, nurse Hickox publicly challenged a quarantine order by the state of Maine. She has twice tested negative for Ebola and says she will lead a normal life unless she feels ill. Hickox and her boyfriend, both staying in Fort Kent, headed out for a bike ride this morning followed by the media. (Photo by Spencer Platt/Getty Images)
Photograph by Spencer Platt—Getty Images

In recent media interviews, the best available legal minds have predictably disagreed on the merits of potential legal challenges to certain state Ebola quarantine policies that are more aggressive than those being recommended by the federal Centers for Disease Control and Prevention.

The issue seems on the cusp of being litigated in Maine, where symptomless nurse Kaci Hickox, who recently returned from treating Ebola patients in Sierra Leone, has been jockeying with the governor of Maine and, before that, New Jersey, over these issues. Related issues have been raised in a lawsuit filed on behalf of Ikeoluwa Opayemi, a Milford, Conn. third-grader, who was ordered to stay home from school this month after having accompanied her parents to Nigeria for a wedding. Nigeria—more than 1,500 miles from the epidemic’s epicenter in Liberia, Sierra Leone, and Guinea—has not had a confirmed Ebola case since August, and is not currently the subject of any Ebola-related CDC travel precautions.

While there is no question that rational, scientifically based quarantines are proper and enforceable, there is inherent ambiguity in what is rational and scientifically based. The experts’ disagreements with one another stem in part from their different understandings of the precise facts posed by each potential challenge, but also from the absence of recent case law on the subject—a fact for which we should actually be profoundly grateful. The miracles of modern medicine have largely spared us these wrenching dilemmas for more than a century.

The key U.S. Supreme Court precedent is Jacobson v. Massachusetts, a 1905 ruling by Justice John Marshall Harlan. (Harlan may be best known for his lone, heroic dissent in the infamous Plessy v. Ferguson decision of 1896, where he refused to endorse the majority’s “separate but equal” doctrine, which blessed apartheid policies in the American South).

Jacobson was decided in the wake of a smallpox outbreak in Boston that comprised 1,596 cases and led to 270 deaths, according to a 2005 analysis of the case in the American Journal of Public Health by Lawrence O. Gostin, an authority on law and public health issues at Georgetown University Law Center.

Jacobson was actually a vaccine case. The 7-2 majority upheld Massachusetts’ right to sanction Jacobson for refusing to undergo the smallpox vaccine.

Under the state’s general “police” powers, the Court held, the State may invest local officials or commissions with “authority in some appropriate way to safeguard the public health and the public safety.”

While health-related edicts sometimes restrict individual liberties—as vaccine and quarantine laws unquestionably do—and therefore implicate federal Due Process concerns, “the liberty secured by the Constitution of the United States … does not import an absolute right in each person to be, at all times and in all circumstances, wholly freed from restraint,” Justice Harlan wrote. “Upon the principle of self-defense, of paramount necessity, a community has the right to protect itself against an epidemic of disease which threatens the safety of its members.”

As an example, he continued: “An American citizen, arriving at an American port on a vessel in which, during the voyage, there had been cases of yellow fever or Asiatic cholera, although apparently free from disease himself, may yet, in some circumstances, be held in quarantine against his will on board of such vessel or in a quarantine station, until it be ascertained … that the danger of the spread of the disease among the community at large has disappeared.”

But while those portions of the decision seem to grant broad discretion to health authorities, other passages impose clear restrictions on their powers even in this context, potentially favoring the legal positions of people like Hickox or Opayemi.

“It might be,” Justice Harlan cautioned, for instance, “that an acknowledged power of a local community to protect itself against an epidemic threatening the safety of all, might be exercised in particular circumstances and in reference to particular persons in such an arbitrary, unreasonable manner, or might go so far beyond what was reasonably required for the safety of the public, as to authorize or compel the courts to interfere for the protection of such persons.”

Professor Gostin, in his 2005 article, distilled from that ruling four standards that he believes must be met by health regulations if they are avoid impinging fundamental, federally protected individual liberties:

Against this framework, the devil is then in the details.

In the case of Hickox, for instance, it appeared at first as if governors Andrew Cuomo of New York and Chris Christie of New Jersey, who called a joint press conference to announce their tough new stance, had made a fundamentally political decision to start systematically quarantining any health care worker who had worked with Ebola patients, even if symptomless.

“When political figures start grandstanding,” says Charles Sims in an interview, “and haven’t even consulted health commissioners, courts will be very reluctant to uphold deprivations of liberty.” A litigation partner at the Proskauer law firm in New York, Sims spent nine years as staff counsel at the American Civil Liberties Union in an earlier life.

On the other hand, it appears that there was evidence that Hickox initially showed at least a slight fever when she was individually screened at Newark Airport, which might have justified preliminary quarantining. The question then becomes whether her accommodations in the plastic tent provided for her there were adequate and appropriate.

After she tested negative for the disease and was allowed to return to her home in Maine, the question shifts to whether the conditions of her home confinement there are scientifically necessary and reasonable. Can the state stop her from biking in the country? Can it stop her from going to a crowded movie theater? If she visits New York, could Governor Cuomo stop her from coming to Grand Central?

In an email, I asked Gostin if state and city officials might also lawfully take into account the public’s irrational fears about the disease—because it appears to me that that’s the crux of what politicians are being tempted to do. In New York, for instance, could a politician take into account the fact that someone who comes down with Ebola shortly after having used a subway—though he was still asymptomatic at the time of the ride—might cause thousands of people to fear using the subway, even if scientists say the subway remains perfectly safe?

Gostin’s answer was refreshingly unamibiguous. “The answer is no,” he wrote. “Government cannot use public fear as a rationale for depriving a person of liberty. Indeed the rule of law stands precisely to prevent that kind of injustice. The only basis for lawful quarantine is significant risk based on science.”