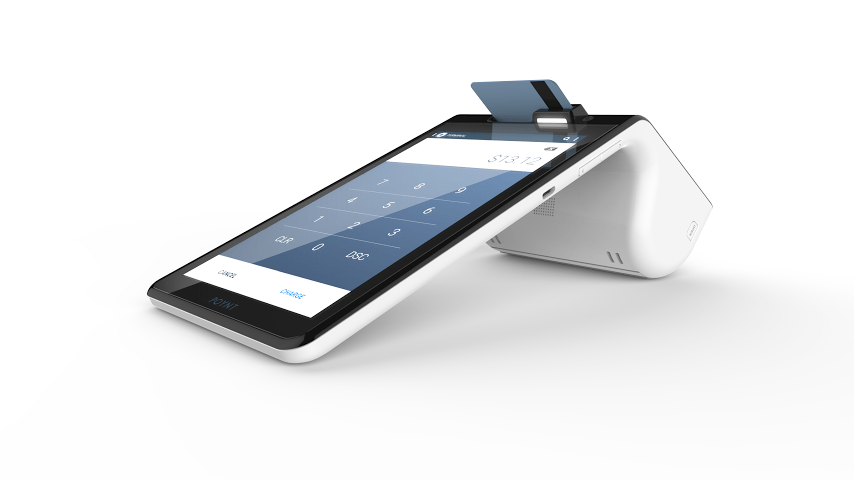 With PayPal, Apple (AAPL), Amazon (AMZN) and others all vying to make a buck off processing people’s money, the payments space is more competitive than ever. But Google Wallet inventor Osama Bedier insists his new startup can go toe-to-toe with the best of them.

On Wednesday, his company, Poynt, introduced a slimmed-down version of those bulky grey credit card readers with numeric keypads found at many large U.S. stores. The sales pitch is that its terminals pack far more technology than those of the incumbents, which have dominated the market for years.

“Over the last 5 years, I spent a lot of time thinking about how online and offline commerce come together,” Bedier says. “I came to the conclusion that commerce is broken and needs to be fixed.”

Technology has advanced tremendously since the first point of sale terminals appeared in the early 1980s. Today’s smartphones are just as powerful as computers from that era.

Sensing an opportunity, companies ranging from tech giants to start-ups are trying to grab different pieces of the payments business. Terminals, online payments and payments between friends are all under attack.

Getting merchants to rely on an untested company for a critical part of their business will be a challenge for Poynt. VeriFone (PAY) and Ingenico (ING), two companies that dominate the market, will have a clear advantage.

“When it’s all said and done, this is a device that requires merchants to actually purchase and install it,” says Dana Stalder, a venture capitalist with Poynt investor Matrix Partners and a former colleague of Bedier’s. “It will take time [for Poynt] to build out a platform.”

Bedier also faces a challenge from upstarts like Square, which helps mostly small merchants process credit card transactions. For years, the startup focus on small card readers that attach to smartphones and tablets — in lieu of selling terminals — before branching out into other services like Square Cash, which lets people pay each another through email.

Still, if anyone has a good shot, it’s Bedier, Stalder says.

Bedier founded the Palo Alto, Calif.-based Poynt last year with an undisclosed sum from backers including Matrix Partners and Google Ventures. He has a long history in payments, having helped develop Google Wallet, a mobile locker for storing credit and debit card information. The service got a lot of attention when it was introduced in 2011 as a convenient way to shop online, but it has since mostly gone sideways.

When available early next year, the Poynt Smart Terminal will be cutting edge, at least as far as such payments terminals go. It will have two touch screens – one facing the shopper, another facing the merchant. It will also connect wirelessly via 4G Internet access and come with a built-in printer and barcode scanner.

More importantly, the device processes electronic payments beyond the traditional credit and debit cards. Shoppers can use cards that have a security chip called EMV, which is standard in most of Europe and is considered better at preventing fraud. They can also pay by holding their smartphones near the terminal, a technology known as near-field communications that is used in Apple’s new payments system. Another option is to pay or redeem discounts via QR codes, those square, pixelated images resembling digital Rorschach tests.

To attract customers, Bedier suggests he will sell his terminal for around $300, which is at or near-cost. The Verifones of the world see healthy profit margins on their terminals, but it’s on the software side Poynt hopes to eventually make money.

The device will launch with at least three apps including one that approximates a cash register. The start-up hopes outside software developers will want to develop more apps and services on top of it.

Poynt is currently in talks to partner with the top five U.S. banks, a shortlist that typically includes Wells Fargo and Bank of America. Banks have traditionally sold and distributed terminals directly to merchants as part of their business accounts.

Avivah Litan, an analyst with Gartner Research, argues the timing is right for a company like Poynt. In the wake of data security breaches and rising credit card fraud, U.S. merchants are trying to upgrade to technologies that support the EMV credit cards by October of next year.

“These old, blind companies don’t innovate that quickly,” Litan says, who spends hours on the phone most days with merchants complaining that upgrading to EMV is a difficult process. “This has never been an exciting industry, but it is a fertile area for innovation.”